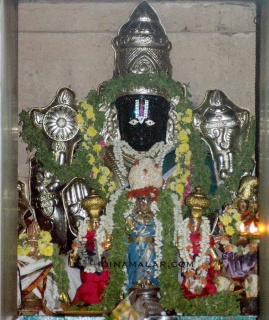 In any case, as I discuss in this question, one of the Alwars was known as Thirumazhisai Alwar. He was the son of the sage Bhargava, but he was raised by tribal people and became a famous Shaivite poet, before ultimately converting to Vaishnavism. Now given the fact that he was born in Thirumazhisai, I assumed that he would have sung about the Madhya Jagannatha temple in his poems. But it turns out his poems never mention it, and for this reason Thirumazhisai isn't one of the Divya Desams, the 108 sacred places of Vishnu sung about in the Alwars poems which I discuss here.

So my question is, why did Thirumazhisai Alwar never sing about th Vishnu temple in his own home town? Is it because of the fact that he went to Kanchipuram as soon as he converted to Vaishnavism? I find it awfully strange that he would never wouldn't even write a single verse in praise of his birthplace and the great Madhya Jagannatha statue found there.

Do any Sri Vaishnava works shed light on this?

14
What happened with the dead body of Lord Shree Krishna?
7
Who compiled the list of 108 Divya Desams of Vishnu?
3
Why does Thirumazhisai Alwar say the Pandava Thoothar statue of Krishna is older than him?