What scriptures describe Vishnu freeing the Bhutas from the curse of Shiva?

I just came back from a trip to India, and one of the places I visited was Sri Perumbudur. As I discuss here, it is the birthplace of the famous Sri Vaishnava Acharya Ramanujacharya. But my question about the Vishnu temple here, the great Adi Keshava Perumal temple. The story of this temple is that the Bhutas, a race of ghosts who answer to Shiva, once laughed at Shiva for dancing naked in Mount Kailash, so he cursed them to go down to the Earth. The Bhutas then went to Sri Perumbudur and prayed to Vishnu, who appeared before them and relieved them of the curse. That is why the original name of Sri Perumbudur is Bhutapuri, or city of the Bhutas. 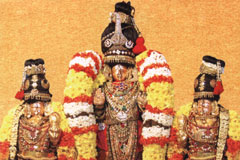 In any case, my question is, what scriptures describe this story of Vishnu relieving the Bhutas of Shiva's curse in Sri Perumbudur? This webpage claims that it's told in the Skanda Purana:

In the Skanda Purana the mythological history of this holy place is narrated by Lord Skanda to sage Agastiya. Once the sages residing in Naimi-saranya, approached Suta, (a disciple of Veda Vyasa) to learn about the Lord Vishnu's holy ksethras (places where Lord Vishnu had His pastimes). Suta narrated the history of Bhuta-puri (Sri Perumpudur) to the sages, as how it was original imparted by Lord Skanda to Agastiya.... Once Lord Shiva was dancing nude in the assembly of the bhutas (troll-like attendants).This amused the bhutas (trolls) who burst into laughter. Angered by their behaviour, Lord Shiva cursed them to lose the association of His abode. The disheartened bhutas approached Brahma and narrated their plight.

Brahma advised them, "Listen, O Bhutas! In Jambuvipa's Barata-varsa exists a holy ground south of Tirumala, known as Satya-vrata kshestra. Moving north east from Satyavrata, is Aruna-ranyam a forest, spend time there and meditate on Lord Vishnu and be redeemed of Lord Shiva's wrath". As instructed, the bhutas arrived in Aruna-ranyam and spent a thousand years in meditation of Lord Vishnu. Touched by their determination, the Lord appeared and blessed them. He then granted the bhutas their wish to be with Lord Shiva and requested His serpentine couch Adisesha to build a large pond .The Bhutas took a dip in the pond to cleanse themselves before approaching Lord Shiva. Lord Shiva appeared in Aruna-ranyam at the request of Lord Vishnu. He accepted the Bhutas back to His abode. The Bhutas with the blessings of Lord Shiva, then built the temple city for worshipping Lord Vishnu in his Adi Kesava deity form.

Does anyone know any other scriptures that mention this the story?