What is the animal on Kubera's lap? Is there a story?

There is an animal on Kubera's lap in the pictures. I posted one such picture below. Also, I want to know if there is a story attached to it. 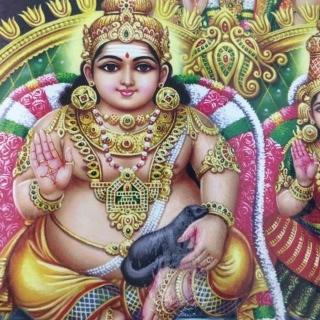 The animal is a mongoose. Here's a picture of a mongoose: 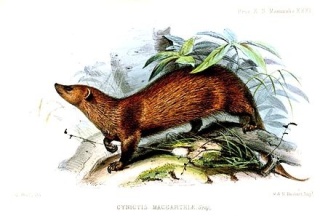 The putative explanation for Kubera carrying a mongoose is that he used the mongoose, which is the natural predator for snakes, to defeat the Nagas (whom I discuss here), and that the mongoose now stores the gemstones that formerly belonged to the Nagas. Here is what Devdutt Pattanaik says in this article:

Kubera has a mongoose in his hand, a golden mongoose that spits out gems every time it opens it mouth. The presence of the mongoose is significant, because mongoose is the enemy of the snake and snakes, especially Nagas, were believed to produce gems on their hoods.

But this story is of dubious authenticity; Kubera is the king of the Yakshas, and I'm not aware of any scriptures that mention a war between the Yakshas and Nagas. Also, the description of Kubera in this excerpt from the Vishnudharmottara Purana doesn't mention anything about a mongoose:

The wealth-giver (Kuvera) should be made of the color of the lotus-leaf, having a man as his vahana, lovely eyes, with necklace resting on the belly with a beautiful garment and a coat of mail. Two large teeth should be done in the mouth of him, who wears a beard. His crown paining his foes should be made inclined to the left.

The goddess Riddhi, a boon-giver should be made on the left lap. The right hand of (that) two-handed (goddess) rests on the back of the god. Oh destroyer of foes, her left hand should be made holding a jeweled vessel and in the right hands (of Kuvera) should be made a mace and a spear. (One should make a flag raised by an emblem of lions, (and) a raised platform for the feet.). His treasure-bags should be made in the form of conch and lotus, and they should contain his treasures.

The notion of his treasure bag being a mongoose seems to be a Buddhist addition; see pages 329-330 of this book:

Jambhala is the Buddhist counterpart of Kubera, the Brahminical god of wealth.... He is of golden complexion and is richly adorned. He has a pot-belly and holds a matulunga (citron) in his right hand while his left squeezes a nakula (mongoose). The nakula, as noted by B. Bhattacharya, "is supposed to be the receptacle of all gems and jewels, and when Jambhala presses the two sides it vomits the treasures within." In Tibet it is claimed that the mongoose symbolizes Kubera's victory over the Nagas, guardians of the treasures." The nakula, A. Getty continues, "is merely a bag made of the skin of a mongoose, replacing the long narrow sack of earlier images."

I suppose because Kubera worship was more common among Buddhists than among Hindus, Hindu depictions of Kubera began to be influenced by Buddhist depictions.

Not the answer you're looking for? Browse other questions tagged animals kubera .

25
What is the story of the "Sudarśana Chakra"?
7
Does Hinduism Say Anything About Snake People, Reptilians, or Snake/Reptilian Like Enities?