What scriptures mention the location of Kartikeya's marriage to Devasena?

As I discuss in this answer, Shiva's son Kartikeya, AKA Skanda or Muruga, has two wives, Valli and Devasena. Now I just came back from a trip to India, and one of the places I visited was the Thirupparamkunram Kartikeya temple, which is the place where Kartikeya married Devasena. For those who don't know, Devasena was the daughter of Daksha, and Indra took it upon himself to find a suitable husband for her. Indra was in need of a general at the time, and he decided that only the Deva Senapati or general of the gods would be fit to be the Devasena Pati or husband of Devasena. After Kartikeya was born and had proven himself in battle, Indra gave him Devasena's hand in marriage. 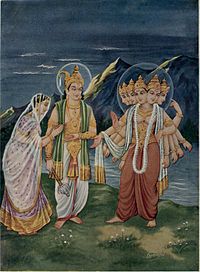 But my question is, what scriptures mention that Kartikeya's marriage to Devasena happened in Thirupparamkunram? This chapter of the Vana Parva of the Mahabharata just says this:

The Performer of a thousand sacrifices then thought of Devasena, whom he has rescued before. And considering that this being (Skanda) was undoubtedly destined to be the husband of this lady by Brahma himself, he had her brought there, dressed her with the best apparel. And the vanquisher of Vala then said to Skanda, 'O foremost of gods, this lady was, even before thy birth, destined to be thy bride by that Self-existent Being [Brahma]. Therefore do thou duly accept her lotus-like beautiful right hand with invocation of the (marital) hymns.' Thus told, he duly married her. And Vrihaspati learned in hymns performed the necessary prayers and oblations. She who is called Shashthi, Lakshmi, Asa, Sukhaprada, Sinivali, Kuhu, Saivritti, and Aparajita, is known among men as Devasena, the wife of Skanda. When Skanda became united to Devasena in indissoluble bonds of matrimony, then the gods of prosperity in her own personal embodiment began to serve him with diligence.

But are there any scriptures which mention the location of the marriage?

Also, Thirupparamkunram is the Tamil name for the place, but is there a Sanskrit name for it? That may help finding references to in scripture.