What scriptures describe Shani as having six eyes?

I just came back from a trip to India, and one of the places I visited was my dad's native village of Kuchanoor. It's the site of the famous Kuchanoor Shanishwaran temple, one of the few temples in the world for Shani, god of the planet Saturn. For those who don't know, Shani is the son of Surya, the Sun god and his second wife Chaya, whom I discuss in this answer. Shani is in charge of dispensing good and bad fortune, and so people often come to Kuchanoor if they've been adversely affected by the gaze of Shani.

But my question is about the Shani idol in the Kuchanoor temple. It's a Swayambhu or divinely created statue, but it's not an anthropomorphic statue, rather it's a vague slab akin to a Shivalinga, on which various ornaments have been attached. Here is a picture of it: 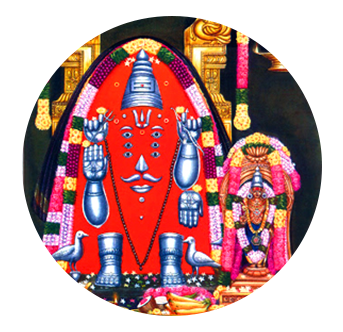 My question is, why is Shani depicted as having six eyes?

Dasharatha's hymn to Shani in this excerpt from the Padma Purana doesn't mention the number of eyes, it just calls him Vishalanetra or having big eyes. But are there other scriptures which say that he has six eyes? Dhyana Shlokas, which I discuss here, would be a good place to look for the details of Shani's appearance?

Also, if he does have six eyes, what is the reason for that? Shani is infamous for the ruinous power of his glance, as I discuss here, so does he have so many eyes to in order to gaze at people?

10
What is the story behind sons of Shani?
4
What scriptures describe the story of Vishnu's “subservience” to Lakshmi in the Nachiyar Koil temple?
3
Why does Thirumazhisai Alwar say the Pandava Thoothar statue of Krishna is older than him?
4
What is the correct ending of this Shani Sloka?