What scriptures describe Narasimha turning into a mountain after killing Hiranyakashipu?

The most famous tenple for Vishnu's man-lion incarnation Narasimha, whom I discuss here, is Ahobilam, the place in Andhra Pradesh where Narasimha killed the demon Hiranyakashipu. But there's another temple related to the story of Narasimha, the Narasimhaswami temple in the Nammagiri hill in Nammakal, Tamil Nadu. In modern times, Nammakal is known for the fact that the Indian mathematician Srinivasan Ramanujan claimed to have received all his ideas from the Nammagiri Lakshmi deity there. And Nammakal is home to a gigantic statue of Hanuman.

But my question is about story of the temple. According to the temple website, after Narasimha kills Hiranyakashipu, he turns into a Shaligrama stone, and then long after that Hanuman brings the Shaligrama to Nammakal, where it grows into a hill: 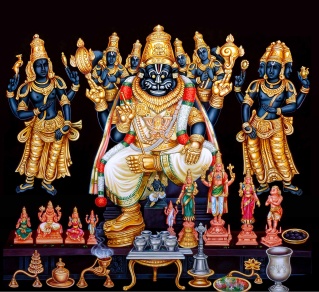 At last Sri Narasimha dragged Hiranya towards the entrance of the palace and placed him on his thighs and torn Hiranya's chest by his nails, at the time of sunset in this way, Hiranya was killed by Sri Narasimha. All Devas were afraid to approach Sri Narasimhaswamy, in that morose mood and so also Sri Mahalakshmi. Baktha Prahaladha prayed Sri Narasimha who blessed him with mercy and disappeared in the from of a Saligramam near Prahaladha's Kingdom ( Ruling Place ) Prahaladha worshipped the Saligramam ever. ( where Sri Narasimha disappeared )

In Threthayuga at the period of Ramayana Sri Hanuman saved Sri Rama and others with Sanjeevi herbs which was brought from Himalayas by him. Then Hanuman replaced it in the Himalayas. On his return through the Sky Sri Hanuman brought the Saligramam in which Sri Narasimhaswamy disappeared. In the meantime the Sun had, risen.... Therefore he placed the Saligramam near the tank of Kamalalayam and performed Santha-Vanthanam.

After he had made his duties Hanuman tried to lift the Saligramam. But he could not move it easily; which was brought by him. This confused Sri Hanuman and he worshipped the God. Then the Saligramam grew as a rock a voice rose Oh Hanuman I determined to stay here, I was brought by you. First you go to Lanka and save Sri Ramachandramurthi. If you want to worship me, you will come here after Ramavatharam and pray ever in front of me in Kaliyuga. Thus Sri Hanuman is even now at Namakkal Sthalam in the western side of the rock standing in the open air, worshipping in front of Sri NARASIMHA SWAMY .

As I discuss in this answer, in Shiva Purana there's a story of Shiva's incarnation Sharabha killing Narasimha, but in other versions of the story Narasimha either kills Sharabha himself or creates a two-headed bird-beast named Gandhaberunda to kill Sharabha. So it's possible that in scriptures in which Narasimha lives, he ultimately turns into a Shaligrama stone.

Let me close with a picture of the divine Nammagiri hill, since that's the hill that Narasimha ultimately turned into: 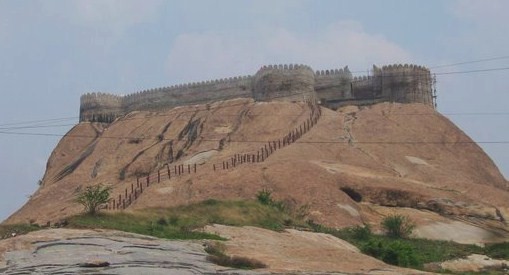 20
What is the story of Sharaba?
7
Why did Vishnu take on an avatar that was half human and half lion?
7
Why do images of Sudarshana have Yoga Narasimha on the other side?