Do any scriptures apart fom Sabarimala Sthala Purana foretell the birth of Ayyappa?

One of the most popular religious destinations in the world is the Ayyappa temple in Sabarimala; it gets far more visitors per year than Tirupati and the Vatican combined! The story of the temple begins with the birth of Dharma Shasta, the son of Shiva who was born during Shiva's encounter with Mohini, as described in this chapter of the Upasamhara Pada of the Brahmanda Purana.

But contrary to popular belief, Ayyappa is not the exactly same as the god Dharma Shasta. Ayyappa refers to prince Manikandan of Pandalam, who was a human incarnation of the god Dharma Shasta. Ayyappa performed many great deeds in his time on Earth, including obtaining tiger's milk and killing the demoness Mahishi, sister of the demon Mahishasura whom Durga killed. In any case, Ayyappa lived relatively recently; In fact a close friend and devotee of his was a Muslim named Vavar. 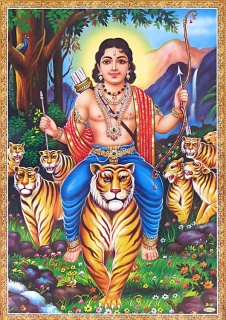 My question is, what scriptures mention Ayyappa? Like I said, the Brahmanda Purana describes the birth of Shiva's son Dharma Shasta, but I'm interested in references to prince Manikandan of Pandalam. Now given that his time period was after Muslims had already come to India, he obviously wouldn't be described in Hindu scripture in the past tense. But Hindu scripture often contains prophecies of future incarnations, so are there any scriptures that foretell the birth of an incarnation of Dharma Shasta in the Kali Yuga?

Active Oldest Votes
-1
Want to improve this post? Add citations from reputable sources by editing the post. Posts with unsourced content may be edited or deleted.

Ayyappa's avatar takes place in Treta yuga - before the arrival of Krishna. He was blessed by Shiva to be the Kali-yuga varadhan. What is Kali yuga- it is the presence of Kali. After Kali leaves Nala (in nalacharitam) it is present in the space and the next avatar of Kali was Duryodhana. When Duryodhana;s jeeva leaves his body, Kali is spread in the space and that is Kali yuga. The time d Duryodhana's death marks the start of Kali yuga actually even though texts extend it to the departure of Shri Krishna. IN Kali yuga the effect of Kali is extreme in the manavas- attachment and the 6 wicked things- Kama, kridha, loba, modha, madha, matsarya. That makes the attchments to matter very strong and the evoution towards the nirvikara tattva is very tough and dimnishes. During that Kali yuga, Ayyappa is teh kali yuga varadhan- one who grants boons (shakthi) to his devotees and hence the self disciplining is important and there came the Mandala kaala vratham- wake up in brahma muhurtha and bath and clean UR self, saranam chant (means total surrender tot he lord), bramcharyam, rstriction to saathvik food only, walk on the earth with bare foot (extract the energy from the Prithvi) and so on. It is a very vast topic as we are really seeing the path of bhakthi first to ayyappa and once that reaches its zenith one will automatically realize that the real truth is the param atma and starts the journey - following the instructional messsage of TatvamAsi and culminating in Aham Brahmasmi to Prajnaanam Brahma.

Not the answer you're looking for? Browse other questions tagged vishnu shiva temple ayyappa .

20
Why is Kartikeya not worshiped much compared to lord Shiva, lord Ganesha and goddess Parvati?
11
Why are women not allowed to enter Sabarimala temple?
17
What is the story of Yashoda's daughter fighting the rebirths of the demons Shumbha and Nishumbha?
9
Are there any English translations of the Bhavishyottara Purana or just the Srinivasa Kalyana section?
6
What is the story of Mahishi?
2
Who is ayappa swamy? Who are ayappa swamy's parents?
2
What is Ayyappa and Hanuman god of?
1
How is Ayyannar related to Shiva?

8
Why are the deity and devotee called by the same name 'Swami Ayyappa' in Sabarimala?
11
What scriptures describe the story of Vishnu's general, Vishvaksena?
13
Why and how did Lord Shiva fall in love with Mohini?