Is there any reason or story behind people worshipping Goddess during Makar Sankranti?

As per Hindu mythology, on the auspicious day of Makar Sankranti, Lord ‘Surya Dev’ visits his son, Lord ‘Shani’, who is considered as the ruling god of Capricorn sun sign. It is a known fact that Lord ‘Shani’ and ‘Surya’ had a conflicting relationship and despite of this on Makar Sankranti, past bitterness is forgotten and new beginnings are made. It is said that if any father visits his son this day, all conflicts are resolved and happiness and prosperity spreads. According to ‘Geeta Saar’, the six months of ‘Uttarayan’ day time of gods are considered holy and people who die during this time attain salvation and go to ‘Krishna Lok’. On the contrary, those who die during the months of ‘Dakshyinayana’ known as the night time of gods, have to be reborn. This day is so auspicious that the wounded ‘Bhishma Pitamah’ left his mortal body and chose salvation or enlightenment. It is believed that those who die on this day will attain ‘Moksha’.

Steps one can follow while doing Makar Sankranti Pujan

On Makar Sankranti, Lord Surya (Sun) is revered and worshipped. The steps to worship Lord ‘Surya’ are as follows: 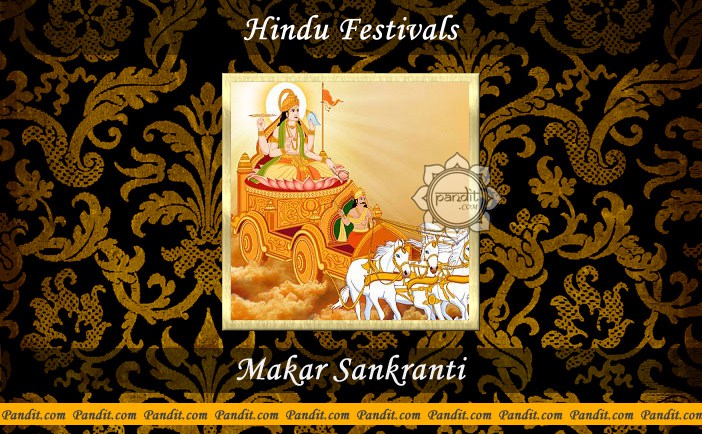 This was the day Maa Ganaga merged into Sea.King Bhagirath finally did tarpan with the Ganges water for his unfortunate ancestors and thereby liberated them from the curse on Makar Sankranti. After visiting the Patala for the redemption of the curse of Bhagirath’s ancestors Gangaji finally merged in the Sagar. Even today a very big Ganga Sagar Mela is organized every year on this day at the confluence of River Ganges and the Bay of Bengal.

Not the answer you're looking for? Browse other questions tagged worship festivals ganga .

10
Why Hindus worship Peepal Trees? (Ficus religiosa)
7
Why do people praise/worship only the tails of cows?
16
Why does Makar Sankranti follow English calendar?
9
Why do we worship Goddess Lakshmi and Lord Ganesh on Diwali?
1
Why people play cards during Ugadhi?
6
Why did Ganga kill seven sons immediately after birth? What is the reason behind this?
5
Why Indra is not worshiped in general regular worship?
5
Is it true that two thousand years ago Makar Sankranti used to be celebrated in December and would be celebrated in April after seven thousand years?