Which verse of the Bhagavad Gita says "If you don't fight for what you want, don't cry for what you lost?" [duplicate]

I came across this quote in social media. It's supposedly said by Sri Krishna in the Bhagavad Gita. Which verse of the Gita conveys the same message as the quote? 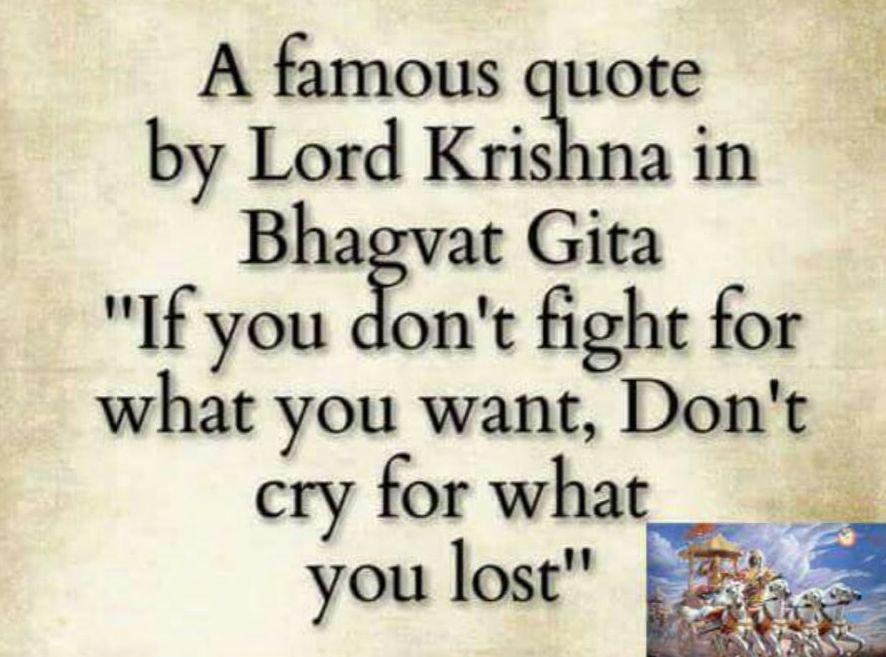 There are many such "Made in Home" slokas doing rounds of internet (WhatsApp, Facebook,...) which are conveyed to others by labelling as "Said in Gita". Usually they retain some part from Gita to have relational authenticity, and remaining part is "creativity".

Only the bold part is true, italic is altered and remaining is hand made:

Here is the "inspiring" verse:

On the other hand, if you will not fight this righteous battle, then forsaking your own duty and fame, you will incur sin.

Note: Above translation is from Swami Gambhirananda, which suits somewhat to the said verse in the question. Usually his translations are found to be the closest among other translators. However, if we go by word by word Sanskrit then:

BG 2.33 -- Therefore, if you don't perform in this DhArmik (righteous, here) war, then by disregarding Swa-Dharma (own nature/duty, here) and fame, you will incur sin.

As far as I know there is no such verse in Bhagavad Gita which meant to say such message.

In Bhagavad Gita Krishna told Arjuna for fighting because Arjuna became overwhelmed, realize whether fighting is improper and lead to sin (1.36-46) confused about his duty:

Now I am confused about my duty and have lost all composure because of miserly weakness. In this condition I am asking You to tell me for certain what is best for me. Now I am Your disciple, and a soul surrendered unto You. Please instruct me.

So, Krishna taught him:

The Supreme Personality of Godhead said: While speaking learned words, you are mourning for what is not worthy of grief. Those who are wise lament neither for the living nor for the dead.

— O descendant of Bharata, he who dwells in the body can never be slain. Therefore you need not grieve for any living being.

And preach properly about Kshatriya Dharma:

Considering your speciﬁc duty as a kṣatriya, you should know that there is no better engagement for you than ﬁghting on religious principles; and so there is no need for hesitation.

And make aware him with the reverse/side effect of not performing religious duty of ﬁghting:

If, however, you do not perform your religious duty of ﬁghting, then you will certainly incur sins for neglecting your duties and thus lose your reputation as a ﬁghter.

I think above verse may be interpreted wrongly that:

Hope this would clear the confusion and lead to original message of Bhagavad Gita.

[1] Because Krishna clearly said [Verse 2.47 & 2.48] for abandoning all attachment to fruit of duty (success or failure). So, in the message (mentioned in question) the meaning of What you want! may violate the Krishna's teaching of Nishkama Karma and hence can be considered as improper interpretation.

Not the answer you're looking for? Browse other questions tagged krishna bhagavad-gita .

16
Which famous quotes are wrongly attributed to Bhagavad Gita?
3
Which Geeta shlok says thus?
5
Where in the Rāmāyaṇa does this quote appear? Who said this?