According to Śrī Brahmasaḿhitā (verse 5.31), Brahma says the following about Kṛiṣhṇa:

"I worship Govinda, the primeval Lord, round whose neck is swinging a garland of flowers beautified with the moon-locket, whose two hands are adorned with the flute and jewelled ornaments, who always revels in pastimes of love, whose graceful threefold-bending form of Śyāmasundara is eternally manifest."

The Indian classical dance of Odissi is characterized by various Bhangas or stance, which involves stamping of the foot and striking various postures as seen in Indian sculptures, they are four in number, namely Bhanga, Abanga, Atibhanga and Tribhanga being the most common of all.[5] The Sanskrit term Tribhanga means Three Bhanga and according to K. M. Varma the term Tribhanga is not the name of a particular standing position but is used in the Silpasastra literature to describe the group of the “Three Bhangas”, namely Abhanga, Samabhanga, and Atibhanga. 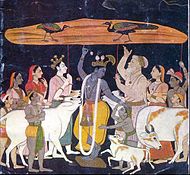 Not the answer you're looking for? Browse other questions tagged vishnu krishna bhagavata-purana .

4
Why Lord Krishna didn't marry any of the Gopies?
5
Why Krishna is called Kunj Bihari?
7
Why was Lord Krishna named 'Krishna'?
20
Why is Lord Surya also called Suryanarayana?
14
Is Vrindavan Krishna different from Dvaraka Krishna?
5
Why did Lord Krishna pick up the Govardhan Hill only with his little finger?
8
Why is Sri Krishna idol turned towards a window in Udupi temple?