Where do the Vedas mention trees doing Yagnas?

As I discuss in this question, by far the most popular school of Hindu philosophy is the Vedanta school, which bases its tenets on the doctrines laid out in the Brahma Sutras, a work by the sage Vyasa that summarizes and systematizes the philosophical teachings of the Upanishads. (You can read the Brahma Sutras here.) But the Vedanta school didn't always have the dominant position in Hindu philosophy, before the time of Adi Shankaracharya the dominant school of Hindu philosophy was the Purva Mimamsa school, which I discuss here. In contrast to the Vedanta school which is devoted to analyzing the Jnana Kanda of the Vedas, i.e. the Upanishads, Purva Mimamsa focuses on analyzing the Karma Kanda of the Vedas, i.e. the Samhitas and Brahmanas.

In any case, in this excerpt from Jaimini's Purva Mimamsa Sutras, the defining text of the Purva Mimamsa school, Jaimini refutes the argument that the Vedas are nonsense because they speak of impossible occurrences. Jaimini argues that these statements are just meant to glorify the power of Yagnas:

Asks the Opponent: — " How do you know that all this (Veda) is not like the utterance of lunatics and children? As a matter of fact, we find in it such sentences as 'Trees sat at the sacrificial session,' 'Serpents sat at the sacrificial session,' 'The old bull sings maddening songs.' Now, how could the 'old bull' sing? How too could 'trees' or 'serpents' sit at sacrifices?"

But my question is, where in the Vedas are these so-called "absurd" statements about trees and serpents performing Yagnas?

The closest statement I could find is in this Kanda of the Taittiriya Samhita of the Yajur Veda, which discusses cows performing a Yagna in order to obtain horns:

The cows performed that Sattra, being hornless and desiring to obtain horns. For ten months they performed it, and then horns appeared. They said, 'We have gained (them), let us cease (the rite), for we have attained the desire for the sake of which we began (the rite).' But others said, either half of them or as many as might be the case, 'Let us perform (the rite) for these months, the eleventh and the twelfth, and when we have made up the year, let us cease'. In their case their horns grew in the twelfth month. Whether by faith, or by lack of faith-that is, those which have no horns-both indeed were prosperous, those which gained horns and those which won strength.

But where are the statements about trees and serpents?

By the way, on a side note, where do the Vedas speak of an old bull singing?

Shabara's opponent's quotation in sanskrit is -

According to Johannes Bronkhorst in his paper "What Did Indian Philosophers Believe?", these statements are untracable in the extant Veda. See footnote 27 (reproduced below). 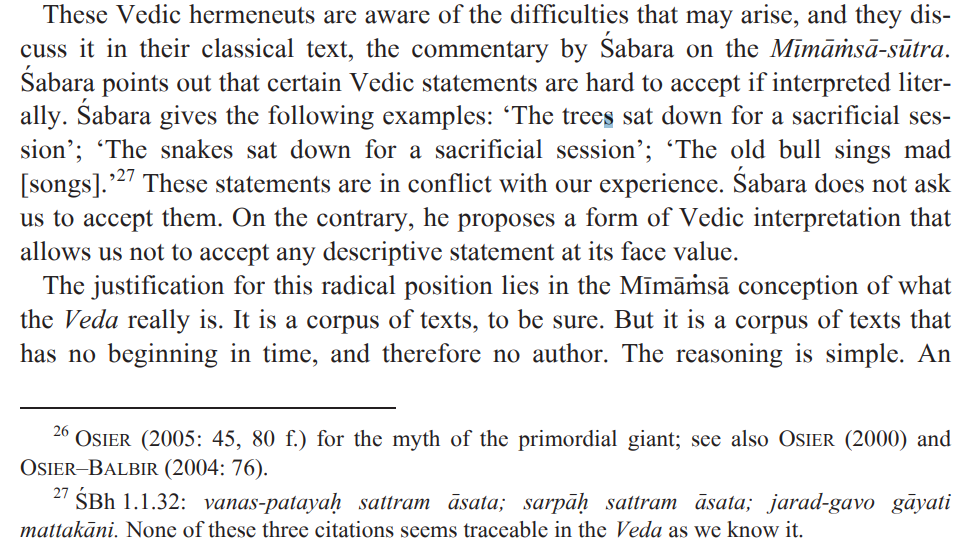 Sayana cites these in the introduction to the Rgveda Bhasya. I looked to see if an editor provided a reference but it's missing in the version I checked.

On a side note: The sanskrit word 'vanaspati' is closer translated to 'plant' / 'creeper' / 'herb' than 'tree'. It often occurs together in the compound 'oshadhi-vanaspati'; 'oshadhi' being a reference to a medicinal plant.

11
Was the Purva mimansa an atheist school?
8
Does Hinduism Say Anything About Snake People, Reptilians, or Snake/Reptilian Like Enities?
9
Whose commentaries on the Vedas and Upanishads are most followed?

4
Are the Nishada and Rathakara castes eligible for the Vedas and Jnana?
8
Where do the Vedas say the cows of the gods walk on their backs?
4
Does Purva Mimamsa believe that the law of Karma is intended to increase faith?
6
Did Kumarila Bhatta believe in Nishkama Karma as a valid means to Moksha?
3
What scriptures describe medicines to remove wrinkles and grey hair?