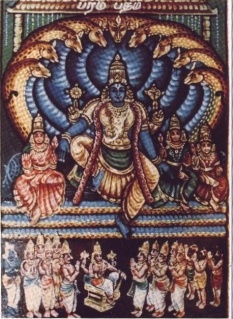 Reset to default
1
Want to improve this post? Add citations from reputable sources by editing the post. Posts with unsourced content may be edited or deleted.

I find it strange that sadashiva is twenty-five headed as he's usually described as five-headed:

According to Shaivite texts, the supreme being, parashivam manifests itself as pentads. His five deeds are known as panchakrityas and are assigned to his five aspects, panchamurti: Brahma, Vishnu, Rudra, Maheshwara and Sadashiva - that is creation, preservation, destruction, illusion and liberation.

The five faces then emanating from these five aspects 'in whom we cannot find any distinctions from himself' are then praised as 'panchabrahmas', the five creators of the five realities.

This at least explains where the twentyfive-fold aspect comes from...

22
Is there any scripture that tells story about Lord Vishnu and MahaVishnu?
11
Do Shaivites believe in something greater than Sadashiva?
7
Is Shiva or Rudra born and is he still alive? Was he killed or merged with supreme brahman at any point of time?
9
What commentary on the Brahma Sutras does the Saiva Siddhanta Church support?
5
What is the story of Siva's Incarnation (ईशान) Ishan?
13
Does Sadashiva ride a tortoise?
7
Who compiled the list of 108 Divya Desams of Vishnu?
2
When Shiva has five faces how does Subramanya have six faces?
3
Beyond Satya loka ie. the end to separate existence?
7
What does the meaning of "Vishnu" have to do with the word "Prabhu"?
See more linked questions