Why didn't Lord Shiva use a weapon to kill Aadi?

The son of Andhakasura and the brother of Bakasura called Aadi performed strict Tapas to Brahma Deva and asked for the boon of Amaratwa or immunity from death. As Brahma could not grant this advantage, Aadi amended the request that he should be able to convert his Body Form as per his wish; Brahma agreed provided that the Daitya could do so only twice. As Veerak was guarding the Entry Point of Shankara and as it was not possible to enter Shiva dwar, Aadi converted his Form as a snake and entered Shankaras abode through an under ground hole and slithered in; thereafter Aadi assumed the Form of Devi Parvati, approached Maha Deva and pretended that she had given up Tapasya as the severity of meditation just to change of body colour from Krishna Varna to Gaura Varna was not worth the strict regimen. Parama Shiva was happy initially that she changed her mind and returned back to him. But on second thoughts and knowing that Parvati would not take a flippant decision to return without achieving her objective, he suspected the fake Parvati and killed the Mayavi Daitya.

In the original text of Matsya Purana it's said that Lord Shiva killed Aadi in his Linga form (phallus).

Here is the source: 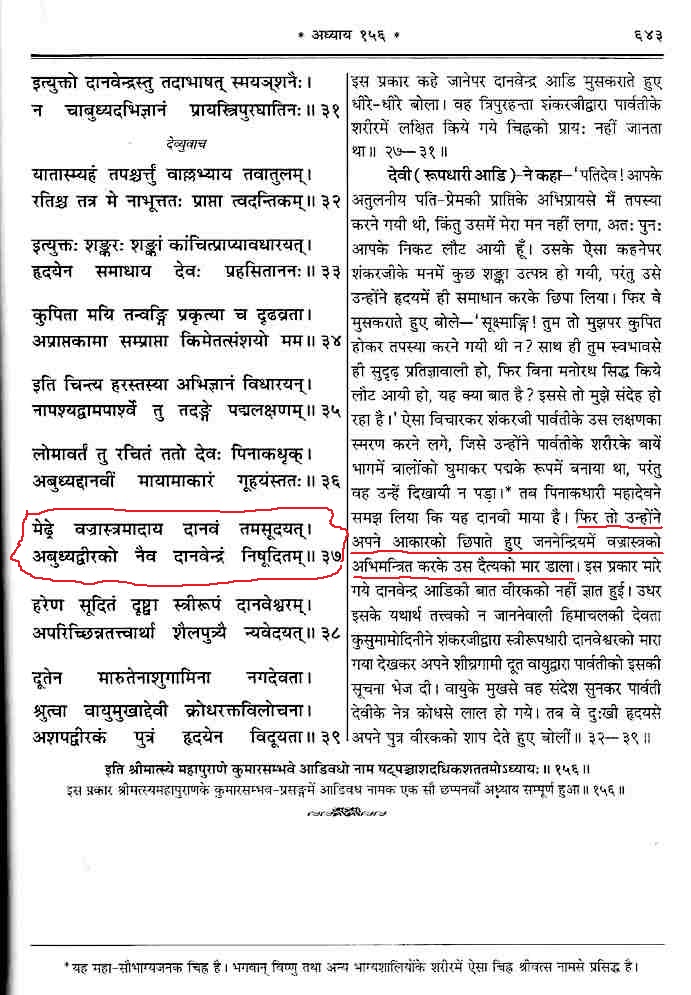 So my question is, why didn't Lord Shiva use any weapon to kill Aadi when Aadi had only one boon that he can only transform his body?

Was it due to some other boon or curse?

20
Why did Lord Shiva fight with Lord Vishnu?
8
How was the world running after Kamadev's death?
10
When did Parvati Devi marry Shiva?
12
Why and how did Lord Shiva fall in love with Mohini?
11
How did Tripura Sundari come into existence?
15
Why didn't Ravana use the Chandrahasa sword against Lord Rama?
5
Why did Shiva cry and showed such grief when Sati died as he is a god and a god is free from all the Maya which is created by him?
5
Where is it mentioned about sister of Lord Shiva in religious texts?
4
Does one eye of Lord Shiva always remain open?
5
Why does Lord Shiva apply ash on His body?