What is the story of Ashvatthama's mani (jewel)?

What is the story of Ashvatthama's mani (jewel)? How did he get it? What purpose did it serve?

Also, what is the Aishika weapon used by Arjuna? Is it a dagger?

After that, Ashvatthama, the son of Drona, determined to storm the Pandava's camp by surprise at night, and to annihilate the Pandava-army while peacefully lulled in the lap of sleep. Bent on avenging the death of his father Drona, he stealthily entered the Pandava's camp, and brooding over the death of his illustrious progenitor, he severed with his sword the heads of Dhrishtadyumna and the five sons of Draupadi. Arjuna, maddened by the agonising waitings of Draupadi, took the fugitive miscreant a captive, and cut out of his (Ashvatthama's) head the famous gem with the means of his Aishika-weapon. [Garuda Purana, Ch. 145]

From the Ganguli translation of the Mahabharata, Sauptika Parva, Ashvatthama himself explains the powers of his gem:

Drona's son said, "This my gem is more valuable than all the wealth that has ever been earned by the Pandavas and the Kauravas. If this gem is worn, the wearer ceases to have any fear from weapons or disease or hunger! He ceases to have any fear of gods and danavas and nagas! His apprehensions from rakshasas as also from robbers will cease. Even these are the virtues of this gem of mine. I cannot, by any means, part with it. That, however, O holy one, which thou sayest, should be done by me. Here is this gem. Here is myself."

In the opening chapter of The Mahabharata, Vyasa, while giving a very concise account of the whole Mahabharata story, says the following about Ashvatthama's jewel:

Ashvatthama hands over the gem to Yudhishtira who happily accepts it as a gift:

Draupadi said, "I desired to only pay off our debt for the injury we have sustained. The preceptor's son is worthy of my reverence as the preceptor himself. Let the king bind this gem on his head, O Bharata!" The king [Yudhishthira] then, taking that gem, placed it on his head, at the desire of Draupadi and regarding it as a gift from the preceptor. Holding on his head that excellent and celestial gem, the puissant king looked beautiful like a mountain with the moon above it."

This 18th century drawing of the scene shows an injured-in-the-forehead Ashvatthama walking away: 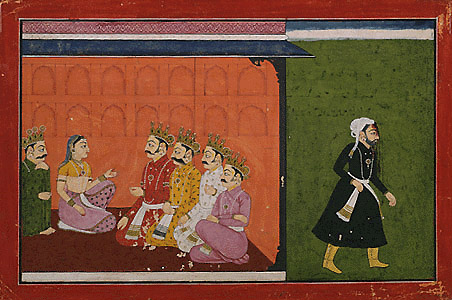 As for the Aishikastra supposedly used by Arjuna, the translators of Garuda Purana from Motilal Banarsidass Publishers footnote that it's a blade of grass and it matches with the meaning of the Sanskrit word aishika.

P.S. When Krishna curses Ashvatthama for his shameful act, he says Ashvatthama will roam the Earth "with the weight of all diseases." And I believe part of Krishna's words will come true due to the fact that Ashvatthama just gave away his gem and with it also lost all immunity from various diseases.

The holy one [Krishna] said, "The fall of this mighty weapon will not be fruitless. The foetus will die. But being dead, it will live again and have a long life! As regards thyself, all wise men know thee for a coward and a sinful wretch! Always engaged in sinful acts, thou art the slayer of children. For this reason, thou must have to bear the fruit of these thy sins. For 3,000 years thou shalt wander over this earth, without a companion and without being able to talk with anyone. Alone and without anybody by thy side, thou shalt wander through diverse countries, O wretch, thou shalt have no place in the midst of men. The stench of pus and blood shall emanate from thee, and inaccessible forests and dreary moors shall be thy abode! Thou shalt wander over the Earth, O thou of sinful soul, with the weight of all diseases on thee.

Not the answer you're looking for? Browse other questions tagged mahabharata arjuna ashwatthama .