Who is Goddess Shyamala?

Goddess Shyamala is worshipped by the Tamils in Batam, Indonesia.

Can someone give me her story?

Does it have any scriptural basis or is it a folklore?

At the end of the Homa, Lalita Devi came out of the Chidagni Homa Kunda, seated on a special chariot called “Chakra Raja Ratha”. Therefore, we find the descriptions such as “Chidagnikunda sambhoota” “Deva kaarya samudyataa” and “Chakra Raja Rathaa Roodha Sarvaayudha Parishkritaa” in Lalita Sahasranama......

Order of Creation. She extended Herself in both male and female forms and continued the process of creation.

(xviii) From her smile, she created Vighneshwara.....

According to Jahnava Nitai Das of Bhaktivedanta Ashram

Shyamala Devi is the form of Durga Devi who assists Lord Krishna in interacting with the material world during His incarnation (as Shyama). For every incarnation of Krishna or Narayana there is a form of Durga that assists Him to interact with the material energy. Narayana is nirguna, He does not have any connection with the three modes of material nature. As such He is always aloof to matter and never comes in contact with it. When He desires to interact with the material energy He does so through a via medium. It is like using a spoon to stir a pot of soup. We don’t stick our hand into the soup and stir it, we use a via medium, in this case the spoon, to do it.

In the creation and manifestation of the material nature, the Maha Vishnu uses the assistance of Shambu to impregnate the matter with the living entities. Shambu is the utensil He uses to touch the material energy.

When the Lord incarnates, a similar situation occurs. The Lord’s body is absolutely spiritual, but He is interacting with elements from the material energy. For example, when the Varaha avatara wanted to lift the Earth planet, a form of Durga named Varahi came in between and actually lifted the Earth. The Earth is material, but Varaha was purely spiritual. As such they were, in a sense, not compatible. To harmonize the interaction, Durga assumes a form and carries out the will of Narayana on the material side, thus He remains nirguna – not having come in contact with the material energy. It is because of this that some Puranas describe the same story leaving out the incarnation of Narayana. They may say Durga took the form of Narasimhi and killed Hiranyakashipu. It is not false, she did take that form, and she did perform the action on the material side of existence, but they are leaving out the complete story. This is why Durga is called as the chaya-shakti, or shadow energy. She acts as the shadow of Narayana.

In the words of the Gita:

“The material energy is functioning under My direction.”

There is a Bengali text called Chandi (Chandi Mangala, not Chandi Path) which among other things describes the various forms of Durga in relation to the forms of Vishnu. Much later Devi Bhagavatam was written, but it has become more popular now, since Chandi is written only in Bengali.

ShyAmalA is one of the chief Tantric goddesses in the Sri vidya krama. She is also one of the mahA-vidyAs of the shakta tradition as she is the mahAvidyA mAtangi herself.

She is known with many names like Raja ShyAmalA, Raja mAtangi, matangi, mantriNi etc. All these aspects are similar to goddess Sarasvati. In other words, these are tantric forms of Saraswati.

She is the goddess of music, arts, dance, speech etc.

The Dhyana Mantra of Raja-matangi from the Purashcharyarnava describes Matangi as green in colour with the crescent moon upon her forehead. She has long hair, a smiling expression and intoxicated eyes, and wears a garland of kadamba flowers and various ornaments. She perspires a little around the face, which renders her even more beautiful. Below her navel are three horizontal folds of skin and a thin vertical line of fine hair. Seated on an altar and flanked by two parrots, she represents the 64 arts.1 The Saradatilaka, adds to this description that Raja-Matangi plays the veena, wears conch-shell earrings and flower garlands, and has flower paintings adorning her forehead (wiki) 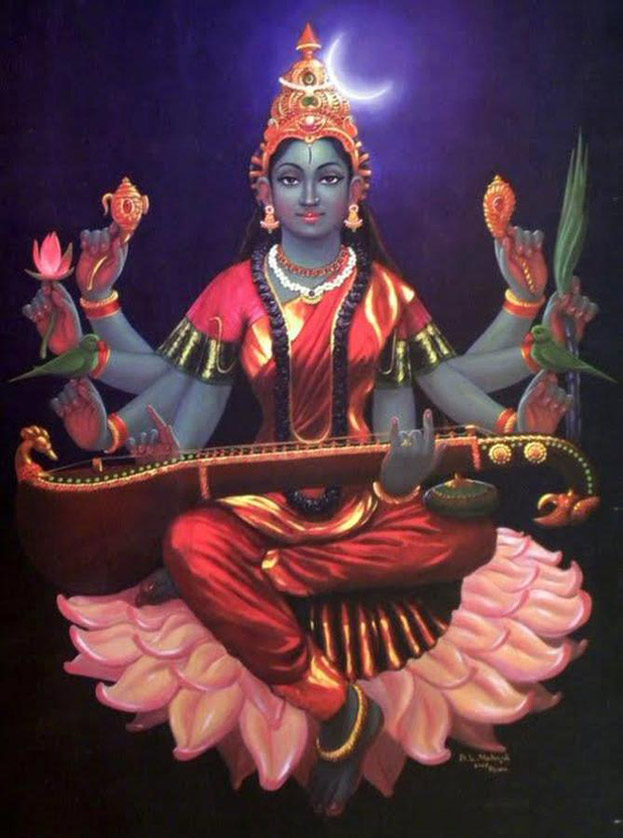 During the sacred Navarātrotsava of Rājamātaṅgī, one worships nine forms of śyāmalā during the nine days:

The great Mantriṇī of Mahāsiṃhāsaneśvarī can be worshipped in the śrīcakra itself while imagining the seven āvaraṇas within it as taught in parā tantra; or in the Geyacakra composed of bindu - trikoṇa - pañcakoṇa - aṣṭadala - ṣoḍaśadala - aṣṭapatra - caturdala and caturaśra. On each of the nine days, āvaraṇa kramas specific to the said nine forms are performed, followed by japa of the mūlamantra and the mantra of the specific form of mātaṅgī invoked that day. On the ninth day, a suvāsinī belonging to a lower caste is worshiped as verily the Goddess herself and pleased by offering gifts and sweets. Balidāna is of great significance on each of the nine days and is also offerred to Hasantī śyāmala and Kṣetrapāla along with the Mūlavidyā.

Through her grace, vaśīkaraṇa of the Trailokya i.e. Kāya, Vāk and Citta (which are already made strong and free from obstacles through the upāsanā of Mahāgaṇapati) can become possible. Thus then becomes possible the ākarṣaṇa of Manas, Prāṇa and Mantra so as to unite them within the field of pristine awareness, leading to mantra siddhi. Mantra siddhi of Mahārājñī is hence difficult without the grace of Mantriṇī who verily is the essence of Vāk and hence of every mantra. She is thus described as creating innumerable Sarasvatī-s with her mere side glance.

Raja Shyamala Devi or Raja Matangi mata is a goddess in Sri Vidya Upasana. A higher expertise can be achieved by her upasana. She is also mentioned in the Lalita Sahasranama. She is also a source of education and knowledge like Saraswati Devi.

4
Is it a fact that the city of Shimla is named after Goddess Shyamala?

5
How was Goddess Manasa born?
8
Are the 10 Mahavidyas an expansion of Goddess Sati or that of Goddess Shakambhari?
1
Did Lord Rama worship Devi Ambika?
4
Need help identifying Hindu Goddess
3
Who is NityA Devi Goddess
2
Who were the parents of Bhumi Devi(Prithvi)?