I have heard from my teacher that there is a big temple of Lord Shiva named "Brihadishwara Temple" which is located in Tanjore which is in Tamil Nadu.
Who built this temple and what is its importance?

The Brihadeeswarar Temple is one of the Most Oldest and Famous Temple in India. It is Situated in Thanjavur (Tanjore) at Tamilnadu in India.

The Main Significance of this Temple is the Deities and the way the King of Raja Raja Chola-I have built.

The Temples is as follows :

The Br̥hadīśwara Temple, or the Big Temple of Tanjore, or the "Periya Kōvil" (Big Temple), is a Śiva Linga temple built by Emperor Arul̥mozhivarman , known in history as Emperor Rājarāja I, completed in 1010 C.E. UNESCO has declared this a part of the "Great Living Chola Temples" heritage site. 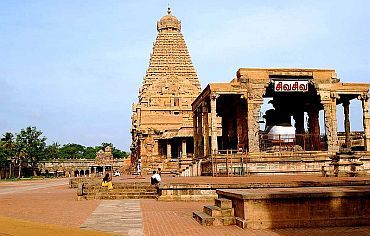 Temple Deities: The "moolavar" or prime deity of the Brihadeeswarar Temple is Shiva. All deities, particularly those placed in the niches of the outer wall (Koshta Moorthigal) like Dakshinamurthy, Surya, Chandra are of huge size. The Brihadeeswarar temple is one of the rare temples which has idols for "Ashta-dikpaalakas" (Guardians of the directions) – Indra, Agni, Yama, Nirṛti, Varuṇa, Vāyu, Kubera, Īśāna – each of whom was originally represented by a life-sized statue, approximately 6 feet tall, enshrined in a separate temple located in the respective direction. (Only Agni, Varuṇa, Vāyu and Īśāna are preserved in situ.)

It is believed that Sri Raja Raja I of Chola Dynasty wished to build such a temple during his stay at Sri Lanka. The architecture of the temple adheres to the design spelled out in ancient texts of Agamas and Vaastu Shastras. The temple architecture and engineering was completed by Sri Kunjara Mallan Raja Raja Perunthachan, who is considered as ancestor of Vaastu Vedas and belonged to the bloodline of Dr. V. Ganapathi Sthapati of Chennai. Dr Ganapathi is the chief architect of the famous Thiruvalluvar Statue of Mahabalipuram made of 133’ granite stone at the tip of Southern India. The art of ancient architecture and the marvellous engineering flows down the generation of this family and even as on date, the family members practise this art. Based on the architecture of Kunjara Mallan Raja Raja Perunthachan in building Brihadeeswarar temple, Dr Ganapathi started the American University of Mayonic Science and Technology The standard measures used in construction come from the ancient Vaastu shastras which measures 1 3/8-inch and is used even today. Other units of measure include hasta, muzam, or kishku with 24 units equalling to 33 inches. Similar measurement principles are observed in the ancient structures of Indus valley Civilisation some 4000-6000 years ago. Though different units of measurements are used in modern construction, the base comes from Vaastu Shastras, given its ancient value. This temple has the unique record of being constructed with granite stones and completing within short span of five years (beginning from 1004 AD). The temple rests on a solid base of 16 feet (about 5 metres in height). The deities made of stone are placed on this along with other idols of Shiva dance. The Kalasam, the top most portion of the shrine weighs very heavily approximately 81 tonnes of single stone block. Apparently, lack of machines in those times, this stone was believed to have been dragged using a inclined plane having length of 6.44 km. The Nandi and presiding deity Lingam weighs about 20 tonnes and height of 3.7 metres respectively. There is not much place in the prakarana area and measures approximately 125m by 240 m. The exterior wall is decorated with 81 carvings of various postures of Bharatanatyam, a classical dance belonging to Tamil Nadu State. The Amman sub-shrine was later on added by the pandyas during their rule in 13th Century. Thereafter, the shrines of Ganesha and Subramanya were added to the temple premises by Maratha Rulers and the Vijayanagara rulers respectively.

Interesting Features of The Brihadeeshwara Temple

A study in Oriental architecture or history is certainly incomplete without a mention of the Tanjore Brihadeeswara Temple or the Tanjore Periya Kovil (Big Temple). This imposing structure was built by RajaRaja Cholan and his sister Kundavai, both ardent devotees of Bhagwan Shiv. It was constructed by the King at the height of the Chola reign to signify his bhakti, power and strength. Here are few interesting facts about this Chola temple of Thanjavur:

a) The original name of the deity was Rajarajeshwar. It was the Marathas who gave it the name Brihadeeshwara or the Great Ishwara. b) The main temple is entirely built of granite. More than 130,000 tons of granite was used to built it. c) The only temple in the world wherein the shadow of its Gopuram does not a appear on the ground at noon. d) The statue of Nandi at the entrance of the temple is carved out of a single stone. e) The main Vimanam, which is at about 200 feet is often called Dakshin Meru or Southern Meru. f) The inspiration to build the temple came to Raja Raja Cholan during his visit to Sri Lanka seeing Vedic structures of Hindu kings and was a result of a divine dream he had. g) The temple has a portrait of Raja Raja Cholan paying obeisance to Bhagwan Natraj. This is undoubtedly, the first ever instance of a royal portrait. h) Inscriptions in the temple point towards Kunjara Mallan Raja Raja Perunthachan as the chief architect of the temple. His successors survive to this day and practice the art of Vastu or Vastu Shastra.

Dakshin Meru Thanjavur Tanjore Temple i) Portraying dance is the reflection of divine emotions of Bhakts (devotees) showing their joyful feelings which they sense when they see the God himself. Depictions of nartakis or dancers showing eighty one of hundred and eight karanas (108 synchronised movements of hands and feet) in Bharat Natyam are carved here. These selective karanas represented here are a part of karanas mentioned in the Natya Shastra of Rishi Bharat. There is also evidence that the temple was a platform for trained dancers to showcase their devotional talent. These depictions are first of their kind. j) The inscriptions also mention the different kinds of jewels used in the period. Each of these jewels are mentioned in detail. A total of twenty three different types of pearls, eleven varieties of diamonds and rubies are mentioned in these inscriptions. k) The chanting of ॐ in the Grabhagriha exponentially expands the positive energies in the temple.

What astounds historians is that there was not a single granite quarry in about 100 km radius of the temple. This means that transporting these stones would have been a herculean task. But Raja Raja Cholan insisted on the use of these stones. All of these features make this Chola temple of Tanjore, a magnum opus of the opulent Chola kingdom. 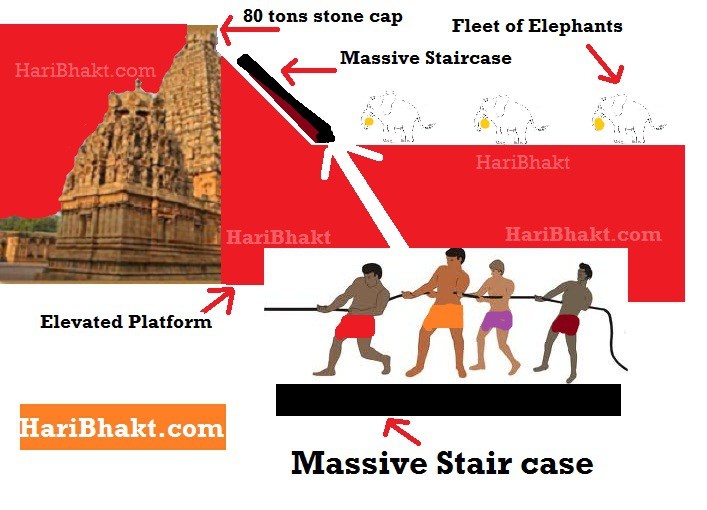 An old Image which shows how it's built 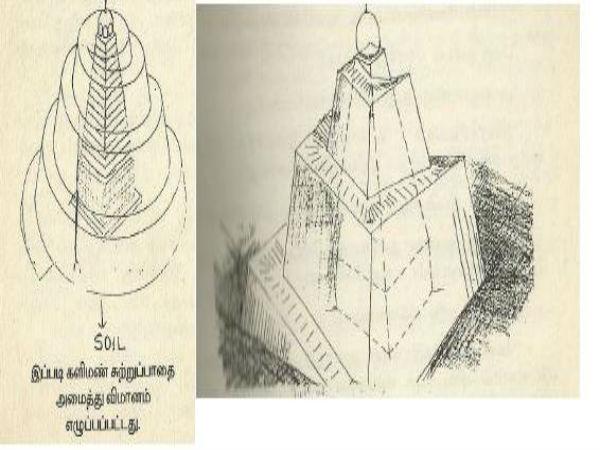 The Other Facts are :

Only granite was used to make the entire temple structure. It is believed that about 130,000 tons of granite was used to construct the Brihadeeswara Temple. The height of the temple tower (vimana) is 216 ft and among such kinds of structures, this is the tallest in the world. Just at the entrance of the temple, there is a large statute of Nandi (sacred bull) measuring about 16 feet in length and 13 feet in height. This statute of Nandi facing the inner sanctum is carved out of a single stone. The topmost structure of the temple known as “Kumbam” is also carved out of a single granite stone, weighing about 60 tons. There are two gateways, known as “Gopuras” on the eastern side of the temple to enter. Hundreds of sculptures adorn the exterior of the temple, whereas inside the temple there is a huge idol of Lord Shiva with three eyes. The third eye is closed. The entire compound of the temple has 250 lingams (representative of Lord Shiva). 108 dance poses, known as “karmas” performed by Lord Shiva have been sculpted on the inner walls of the sanctum sanctorum. The Brihadeeswara temple consists of a pillared hall and an assembly hall known as mandapas and many sub-shrines. The inner Mandapas are the most significant part of the temple. The mandapas are divided into different levels with the help of sculptures and pilasters. Idols of “Ashta-dikpaalakas” or guardians of directions, are found in the Brihadeeswara Temple making it one of the rarest temples in India. Six feet tall statues of Agni, Varuna, Indra, Yama, Vayu, Isana, Kubera and Nirriti have been placed in a separate temple. It is believed that the shadow of the tower over the gateway of the temple never falls on the ground, especially in the premises of the temple.

This temple was built by king name RajaRaja Cholan alias Arulmozhivarman. This temple is architected in great way. The main Gopuram is of 216 feet height. The stone at the top of the gopuram is of 80 ton weight. There are many more points related to the architectural marvels about this temple.

10
How should be a Shivaalay Temple?
11
Why Shivalinga sthapana in temple is unique in Hinduism?
4
What scriptures describe the story of Vishnu's "subservience" to Lakshmi in the Nachiyar Koil temple?
11
The story behind Pashupatinath temple in Nepal
6
What is the story of Rameshwaram Jyotirlinga?
9
What is the meaning behind Shiva with 26 heads and 52 hands?