Did the Vanaras manhandle Mandodari?

According to Wikipedia and other blogs, when Ravana's sons and brothers perish in the war, he performs a Yajna to ensure his success. At that time, Rama sends his army to disrupt the Yajna and as a part of the disruption, Angada and the other Vanaras drag Mandodari to the Yajnashala by her hair and torture her in front of Ravana, forcing him to leave his Yajna to rescue her. Thus Ravana's Yajna is disturbed. The story is mentioned to be present in Valmiki Ramayana. But this story is neither present in valmikiramayan.net nor in the copy I have. So which Valmiki Ramayana is this story in?

Furthermore pulling a lady's hair is supposed to be a heinous crime, at least when Duhshasana does it. So why are the Vanaras spared of punishment?

Yes, they did according to Adhyātma Rāmāyaṇa:

2–3. All those Rākṣasas were killed by Rāma in battle with sharp arrows. Himself pierced in the breast by the sharp arrows of Rāma forthwith Rāvaṇa entered Laṅkā in great distress.

5–6. Having bowed to him, the ten-faced Rāvaṇa said with folded hands, "Sir, Rāghava has destroyed Laṅkā with its hosts of Rākṣasa leaders. All the great Daityas, together with sons and relations, have been slain. How can I suffer such a load of misery with thee my good preceptor living?" Thus addressed by the ten-faced Rāvaṇa, the preceptor said to him.

7–9. "Do thou make heedfully libations unto the fire. If there be no impediment in the homa, from the fire there shall arise for thee a great car, horses, quiver, bows and arrows armed with which thou shall become unconquerable.

10–12. "Take thou the mantras communicated by me and make the homa speedily. Thus directed, Rāvaṇa, the king of the Rākṣasas, forthwith went to his palace aud there made a cavern like the nether regions.

Having carefully closed all the entrances of Laṅkā and collected all the ingredients of the homa as prescribed in books treating of magic shāstra, (abhicharaka) he entered the cavern and silently began to perform the sacrifice.

15–16. "Therefore for throwing obstacles in the performance of homa, do thou despatch the leaders of the monkeys." "Very well," so saying Rāma sent Sugrīva, Aṅgada, Hanumāna, and other powerful warriors.

16–17. Having jumped over the ramparts of Laṅkā and gone into the palace of Rāvaṇa, ten crores of monkeys pounded to dust the guards of the place, the horses and the elephants of the asura king in a moment.

25–27. There in presence of Rāvaṇa as she was weeping like one without a protector, Aṅgada tore off her dress which was studded with gems. Her garment tom there fell on the ground with all its jewels. The knot of her nether garment which was studded with gems was also broken and the garments fell on the ground in sight of Rāvaṇa. All her ornaments were scattered on all sides.

29–32. Then Mandodari crying piteously in presence of Rāvaṇa said to him.

"Thou art a shameless creature, thy wife is being dragged by the enemy in thy presence and yet thou art performing this homa and is not ashamed of it.

"He whose wife is being attacked by vile enemies in his presence, should die that very moment. His death is better than his being alive.

"Ah, Meghanāda, thy mother is being thus insulted by monkeys. If thou wert alive, how could there be such misfortune for me.

"My husband has from desire of life renounced his wife as well as shame."

The translator however notes, this episode is likely a late addition to the text:

NOTE – The story of the visit of Ravana to Sukra Acharya, his performance of homa and the assaults of the monkeys to throw obstacles in his way, do not find a place in the Valmiki. There is also no allusion there to Aṅgada having brought Mandodari to the place of the sacrifice and torn off her garments and insulted her or her appeal to Ravana's sense of shame. All these appear to have been taken by the Adhyatma from some later source.

This story is also found in Raṅganātha Rāmāyaṇa (Hindi translation) and the Mandodarī manhandling scene is also depicted in the mural paintings of the Venugopala Parthasarathy temple in Chengam, Tamil Nadu: 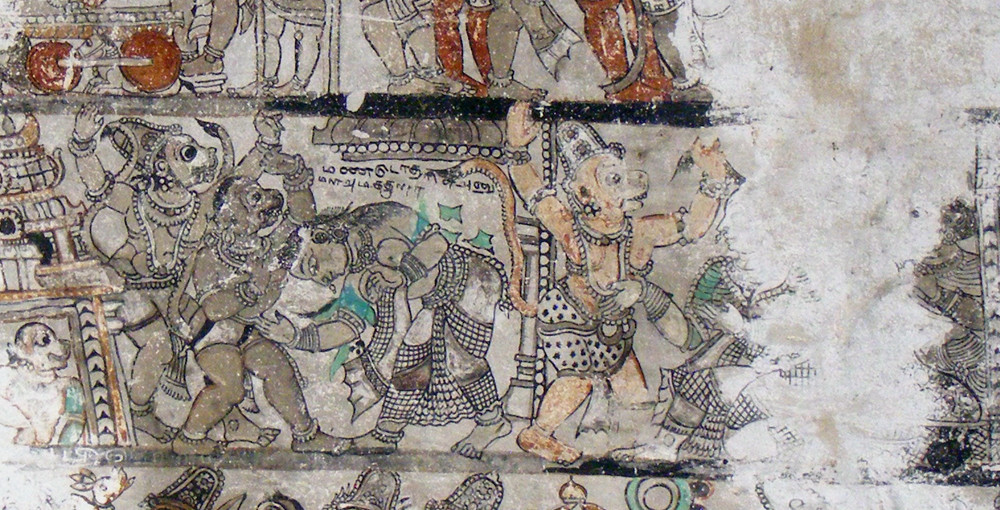 Detail from the eastern panorama. Anumāṉ pulls maṇṭōtarī (extreme right, mostly faded) by her hair. To the immediate left, there is another figure of maṇṭōtarī (bent over) which is much clearer. The artist has gone much further than the text in depicting the violence here. It can be seen clearly that maṇṭōtarī is disrobed, her blouse flying in tatters. Anumāṉ and aṅkataṉ are manhandling, monkey-handling, her. A caption, in Tamil, just over the arched figure of maṇṭōtarī describes the violence and identifies the actors.