In the famous Ram Raksha Stotra(श्रीरामरक्षास्तोत्रम्), in of the place while describing the charecteristics of Lord Rama, it is mentioned as follows:

And the meaning for above is

May he be meditated upon, who has arms reaching his knees, who is holding a bow and arrows, who is seated in a lotus pose

Also, in the Bala Kanda of Valmiki Ramayan, below is the description of Lord Rama

So, Rama is described as Ajanubahu(आजानुबाहु) which means "One whose arms are long enough to reach his knees" in Rama Raksha as well as Valmiki Ramayan.

But I do came across many images of Rama in day-to-day life (in religious places, during religious festivals etc.) but in those images, Rama does not quite appears Ajanubahu(आजानुबाहु).

Below are some images that I found on internet. 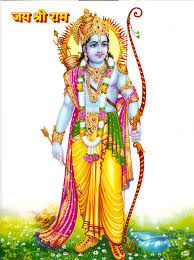 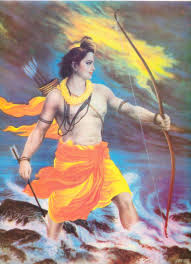 Is this intentional? Or these image-creators does not paid much attention to the fact that how Rama really was and missed this important characteristic of his?

Why Rama is not depicted as Ajanubahu(आजानुबाहु)?

Or do these image creators not pay much attention to how Rāma really looked and missed this important characteristic of his?

Yes, you are right. Moreover, we don't know if Vālmīki is using superlative terms in his poetry and did not mean his readers to take all those physical descriptions literally.

In many other instances, he uses words such as dīrghabāhu and mahābāhu for Hanumān, Daśaratha, Lakṣmaṇa, Rāvaṇa, Indrajit and so on.

Then, king Dasaratha fought a great battle there. With their weapons, demons made into pieces the long-armed Dasaratha.

That long-armed Hanuma, again taking that rod made of iron, killed all those guards.

Both Rāma and Lakṣmaṇa are long-armed:

"Lengthy are their arms, broad are their eyes and they are the wielders of arrows, bows and swords... and on seeing them, to whom there will be no scare? These two are like the sons of some divinity..." Sugreeva thus spoke to Hanuma. [4-2-20]

My eyes are getting clouded with tear, even when I think of killing him. This long-armed Lakshmana alone will finish him. O Monkeys! All of you, together, kill his servants standing beside him.

That Ravana, the long-armed, who caused people to cry, looking up at that monkey standing in front of him, was affected with violent anger, having his mind seized with suspicion, speculated (as follows) about Hanuma, the jewel among the monkeys, who was invested with splendour.

Apart from few physical characteristics, Vālmīki also attributes 16 nonphysical qualities to Rāma. Imagine an artist trying to incorporate all these in his painting; I'm not sure if we will like the final image.

Not the answer you're looking for? Browse other questions tagged belief rama .

8
What are the 16 qualities of Sri Rama?
13
What is the significance of or symbolism behind AjanubAhu (आजानुबाहु)?

8
Why did Lord Rama give a second chance to Ravana, but not to Vali?
5
Why was Lord Rama exiled for 14 years in the Ramayana? Why not 13 or 15?
4
Why do most people fast on Rama Navami but not on Janmashtami?
5
Why is Lord Rama never mentioned in the Mahabharata?
6
Why did Rama tell Lakshmana that “your father” is dead and not “our father”?
4
Anomaly in birth chart of Sri Rama? Kindly clarify
2
Did Lord Rama win as a king but fail as a husband? Why or why not?
6
Is lord ram depicted of 2 arms or 4 in ram raksha stotra?