Are the words inside Bhagvad Gita exactly the same words used in actual conversation (ie, used By Lord Krishna and Arjuna)?

i.e., each verse of Gita consisting exactly of 32 letters, arranged in 4 quarters in a specific pattern of Laghus and Gurus..(except for a few verses in Trishtup meter.)

During the real verbal discussions of Bhagvad Gita did Lord Krishna and Arjun actually speak this way in direct speech? (32 letters arranged in 4 quarters with specific arrangement of Laghu and Guru syllables ?)

OR, did Sage Veda Vyas re-format their conversation in Anushtup meter for the purpose of indirect narration or record of Mahabharat ?

ie, I mean to ask if delivered words of Lord Krishna and Arjun actually verbatim ? or did Veda Vyas convert their dialogue into such a poetic meter?

For chandas information here is a rule for Anushtup meter

As far as I know nowhere is mentioned something like VedVyasa modified/reformatted the conversation in Anushtup meter. It is believed that Srimad Bhagavad Gita which we currently have is the original/exact as said by Krishna and that's why it is called "The song of Lord".

Adi Shankaracharya has written following in his bhashya on Bhagavad Gita:

As God preached about the two 'Dharmas', knowledgeable Vedvyas exactly acquired it in the form of 700 chants called 'Geeta'.

According to the section: "Greatness of Gita" of Gujarati version (Book code:1034) of Srimad Bhagavd Gita by Gitapress Gorakhpur (ebook is not available): 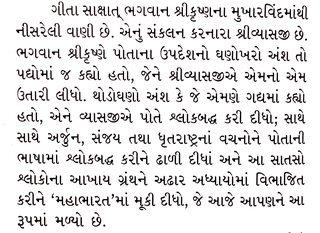 Not the answer you're looking for? Browse other questions tagged mahabharata krishna scripture history bhagavad-gita .

12
Why are there two versions of Chapter 1 - Verse 8 of Bhagavad Geetha?

21
Why did Lord Krishna tell Bhagwat Gita only to Arjuna and not anyone else?
16
According to Bhagvad Gita, Lord Krishna is the ultimate God. So why are there other beliefs in Hinduism?
3
How did the author of Mahabarata know the exact conversation between Krishna and arjuna?