The Sixth Chapter of the Uttarakanda tells about how the devas, unable to withstand the torture of Malyavan, Mali and Sumali, the three sons of Sukesha, rushed to Lord Shiva and then to Lord Vishnu for protection.

Upon hearing this, Malyavan relates what happened to his brothers. In connection he says this: 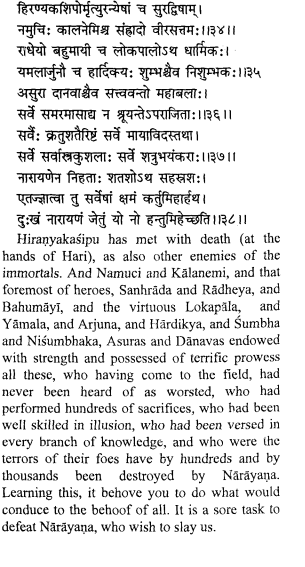 Now I know Hiranyakashipu was killed by Lord Narasimha, Namuchi was killed together by Vishnu and Indra using sea foam, Kalanemi and Samhrada were killed during the Samudra Mathana battle.

None of these asuras seem to be present prior to Malyavan (and he can't be predicting the future), so are they like some other asuras than those whom I have mentioned in brackets?

Most of all, who is Radheya, the son of Radha (NOT Karna)?

13
What are the differences among Rakshasas, Daityas, Danawas, Pisachas?
17
What is the story of Yashoda's daughter fighting the rebirths of the demons Shumbha and Nishumbha?
4
Asuras/Rakshasas who became good?
1
Which king was more powerful between Kārtavīryārjuna and Rāvaṇa, and did they ever share their thrones with each other?
8
What happened to the asuras?
3
Can Asuras or Rakshasas be summoned by any ritual?
2
What does Narada mean by when he says "those Asuras.......who sprang from Vishnu"?
3
Is anti-Brahminism a quality of Asuras and Rakshasas?
4
Are non-Hindus secretly assisted by asuras and rakshasas in their translations of the Vedas?