What is the reason behind use of crackers for temple festivals? [closed]

Burning crackers is an integral part of Diwali, the festival of lights. Crackers are burnt in each and every household and the festival is celebrated with a lot of dazzle and splendor. It is popular belief that burning of crackers marks the victory of good over evil and for attaining peace, prosperity, health and wealth.

It is true that fireworks was invented by the Chinese.However, burning of cracker has become an intergal part of Diwali celebration.Hence, I believe this can not become any off-topic just because there is not mention about them in scriptures.

It is believed that Mughal emperor Akbar started organising mammoth firework displays during Diwali(This celebration is due to direct relation with Jodha Bai,as they she was allowed to follow her tradition and religion).

They called it aatishbazi or a grand show of fireworks. It is said that the fireworks display at Akbar’s capital Agra, could be seen from the Qutab Minar in Delhi as well. 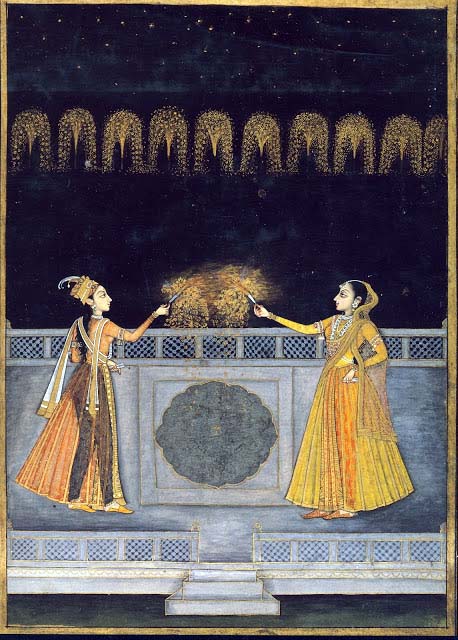 The earliest known Sanskrit text(16th century, possibly dated between 1497 and 1539,) to mention fireworks is Kautukacintamani, by Gajapati Prataparudradeva of Orissa, contains a few Sanskrit verses on the ingredients needed to manufacture fireworks, including sulphur, charcoal, saltpetre, quicksilver, a hollow piece of bamboo and cow urine.

Before this text, in 1466, fireworks were said to be introduced in Kashmir, according to a Persian treatise on the manufacture of fireworks by Kashmiri king Zain-ul-Abidin, who reigned from 1421-1472.

Also a treatise from Karnataka dated after 1400 describing a form of fireworks for display for the king, and a text in Marathi from the early 1500s describing the use of fireworks in a wedding procession. Duarte Barbosa, a Portuguese voyager who traveled to India in 1518, made a reference to firecrackers in his own writing, where he described a Brahmin Gujarati wedding that included “firing of bombs and rockets in plenty, for their pleasure”. These passage are extraction from a book titled 'A History of Fireworks in India', published in 1953 by PK Gode.

Evidently, the tradition of bursting firecrackers on Diwali day has been around for a 300 years or more, even if it may not have been a part of the festival in ancient times. Incorporating fireworks into the celebrations of Diwali make a symbolic sense.Famous mythologist Devdutt Pattnaik comments “Sound and light were traditionally meant to scare away misfortune.” In this sense celebrating Diwali with fireworks is not against the religion.

No, it does not please God and there is not any such mention in the scriptures. As you mentioned, the reason is rather historical because crackers were used to scare away wild animals in ancient times. This is not needed now and is just followed due to tradition. Sri Sri Ravi Shankar talks about it in this video:

Not the answer you're looking for? Browse other questions tagged history temple festivals india .

7
Why are crackers used on Diwali?