Which is the oldest known Hindu text in recorded history?

I know that Vedas are the oldest Hindu scriptures. Although, this question is limited in context to finding out which Hindu text is considered oldest in recorded history i.e. with its year of origin recorded.

Rigveda is believed to be the oldest. Since Hindu considers Vedas to be eternal and maintains that these were heard by seers. The seers only complied them. However, people who research in Rigveda or Indologist suggest that Rigveda is oldest based on the following criteria:

Language of RV and Avestan hymns composed by Zarathustra bear close resemblance for eg. Avestan one can be converted into Vedic Sanskrit one by simple substitution 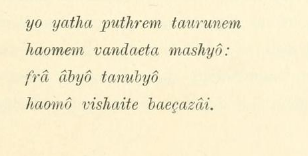 So based on the grammatical and lexical structure of the hymns, it is suggested that RV was composed at ~ 1700 BC. This date is also corroborates with the treaty between Mitanni-Aryans and Hittie in ~ 1400 BC where Indra, Ashvins and Varuna are invoked as witnesses of the treaty. Also based on astronomical observation Subash Kak maintains that Rigveda became older even in 1900 BC at that time later text like works on jyotish started to appear and he concludes that by ~3300 BC all the Vedas were complied in their final forms.

Now within RV, various mandalas are dated depending on lexical structure. Now there are two schools of thought here one mentions that Vedic people which call themselves Aryan come from outside and imposed their belief system on indigenous inhabitants so they divides the mandalas in chronological order as follows:

The other school maintains that Aryan were indeginous of India and they went eastwards. So their chronology is as follows:

Also, Atharvavedic hymns resemble in language to RV's middle period hymns so based on that all vedas are arranged in following order where RV is the oldest and YV being the youngest:

Not the answer you're looking for? Browse other questions tagged scripture history .

2
Which is the most ancient scripture?

13
Where are the original versions of the Vedas?
5
Is Kamasutra a Hindu religious text?
10
Is Bhagavad Gita text Shruti or Smriti?
1
What is the oldest surviving commentary on the Vaisheshika Sutras?
4
in which sect of hinduism manusmriti is canonical text?
2
Which is the oldest of all Purāṇas?
2
What are the most accepted and authentic Hindu texts across the different traditions?