If Lakshmana Rekha is not in Valmiki's Ramayana, then where is it mentioned?

From this article by Devdutt Pattanaik:

This story of Lakshman Rekha, the line drawn by Lakshmana around Sita's hut, comes to us from regional Ramayanas like the Bengali Krittivasa Ramayana and the Telugu Ranganatha Ramayana, written about seven centuries years ago.

From the Wikipedia article Krittivasi Ramayana:

The original Krittivasi Ramayan is dated to the first half of the 15th century. In the next four centuries, it underwent various changes at the hands of various puthi scribes. The current version of the epic was revised by Jaygopal Tarkalankar and was published in 1834. Later in the 20th century, various editions were published based on the Jaygopal Tarkalankar version.

Ranganatha Ramayana was written by the poet Ranganatha—also known as Gona Budda Reddy—between 1300 and 1310 A.D. This Ramayana was composed in 17,290 couplets (in Dwipada metre). This meter is lyrical and can either be recited like the Valmiki Ramayana (written in Anustupa metre) or sung like the Ramcharitmanas (written in Doha-Chaupai). It is quite popular with both scholars and illiterates.

As you can see, these are merely 'adaptations' of the Valmiki Ramayana, but still very popular.

From the Ranganatha Ramayana (Telugu) available at this link, I was able to locate the exact verse wherein the incident of Lakshmana drawing the line (Lakshmana-rekha) along the perimeter of the hut or the parnashala they were staying in, is mentioned. Here Lakshmana is telling Sita that whoever dares to cross this line, his head will break into a thousand pieces:

Luckily, there's also a Hindi translation of the same:

So it looks like Sita without giving a second thought to the Lakshmana-rekha just crossed the line to greet Ravana who's disguised as a sanyasi: 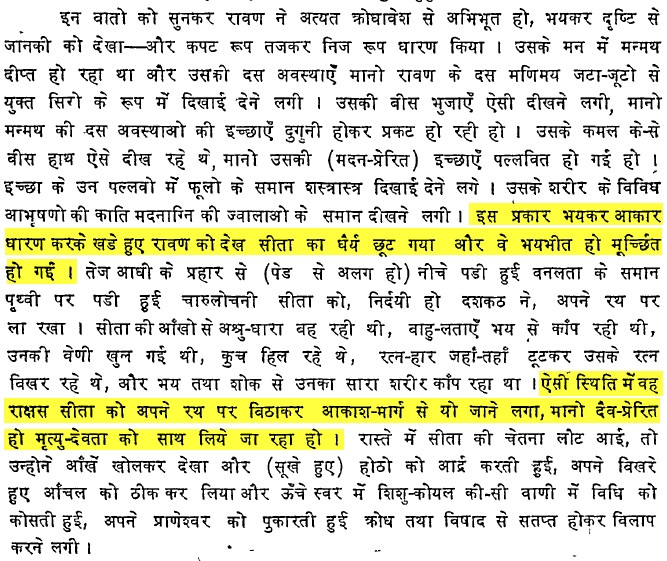 While the much of the discussion between Sita and Ravana is taking place outside Sita's dwelling (for obvious reasons) in Ranganatha Ramayana, in Valmiki Ramayana however, it appears to be happening inside the house because clearly Sita invites and seats Ravana as she would a normal Brahmin guest:

"Oh, auspicious lady, who are you? Whose are you? Also from where are you? And being lonely, what for you are moving in dreadful Dandaka forest that is adored by demons?" Thus Ravana spoke to Seetha.

When the wicked minded Ravana praised her in this way, Vaidehi the princess from Mithila has seen him who has arrived in the getup of Brahman and started to revere him with all the respects affordable to a casual guest.

She firstly fetched a seat him, then invited him with water for feet-wash, and then said to him who looked gracious in his bearing, 'alms are ready.'

Maithili explored him who arrived with the features of a Brahman, with a saffron-robe and alms-bowl, and finding no reason to refute him flatly, as he has come like a Brahman, she invited him as a Brahman.

Not the answer you're looking for? Browse other questions tagged ramayana history sita valmiki lakshmana .

15
Where is it mentioned that Shabari offered to Lord Rama the fruits that she has already tasted?
15
Different Ramayanas

15
Different Ramayanas
7
Is 'Janani Janmabhumischa Swargadapi Gariyasi' wrongly attributed to Rama? Is it even part of Valmiki Ramayana?
2
Did Shri Rama break Parashurama's Dhanusha during the Swayamvara? If so, how did Parashurama respond to this?
5
What are the main differences between Valmiki Ramayana and Agastya Ramayana?
13
Sri Rama and squirrel.. where did this story originate?
16
Is the story of Sita's banishment present in any scriptures other than Valmiki Ramayana?
6
Lakshmana Rekha Mythology?