Do any of the scriptures mention the story of Badavagni/Vadavagni?

I heard a story in which Shiva sees only demons are left on earth and opens third eye. Saraswati takes powers from shiva's third eye and saves the world. 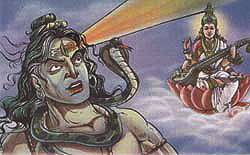 Once Shiva saw the world filled with evil. He decided to clean it and opened his third eye from which came a great fire.

Lord Shiva opened his third eye Saraswati took the form of a river and absorbed the fire. She took it into the sea where it formed a fire-spitting creature called Badavagni. Saraswati declared, "As long as man is wise, the animal will remain here, but if man becomes corrupt, this beast will destroy the world."

Is this true story from scriptures or just a story?

Yes the story is mentioned at various places but it is not Shiva's energy but that of a rishi Aurva that turns into the Vadavagni.

SECTION CLXXX of the Adi Parva of Mahabharat gives the detailed story:

There was a celebrated king of the name of Kritavirya. That bull among the kings of the earth was the disciple of the Veda-knowing Bhrigus. That king, O child, after performing the Soma sacrifice, gratified the Brahmanas with great presents of rice and wealth. After that monarch had ascended to heaven, an occasion came when his descendants were in want of wealth. And knowing that the Bhrigus were rich, those princes went unto those best of Brahmanas, in the guise of beggars. Some amongst the Bhrigus, to protect their wealth, buried it under earth; and some from fear of the Kshatriyas, began to give away their wealth unto (other) Brahmanas; while some amongst them duly gave unto the Kshatriyas whatever they wanted. It happened, however, that some Kshatriyas, in digging as they pleased at the house of particular Bhargava, came upon a large treasure. And the treasure was seen by all those bulls among Kshatriyas who had been there. Enraged at what they regarded as the deceitful behaviour of the Bhrigus, the Kshatriyas insulted the Brahmanas, though the latter asked for mercy. And those mighty bowmenbegan to slaughter the Bhrigus with their sharp arrows. And the Kshatriyas wandered over the earth, slaughtering even the embryos that were in the wombs of the women of the Bhrigu race.

And while the Bhrigu race was thus being exterminated, the women of that tribe fled from fear to the inaccessible mountains of Himavat. And one amongst these women, of tapering thighs, desiring to perpetuate her husband's race, held in one of her thighs an embryo endued with great energy. A certain Brahmana woman, however, who came to know this fact, went from fear unto the Kshatriyas and reported the matter unto them. And the Kshatriyas then went to destroy that embryo. Arrived at the place, they beheld the would-be mother blazing with inborn energy, and the child that was in her thigh came out tearing up the thigh and dazzling the eyes of those Kshatriyas like the midday sun.

This child was called Aurva since he came out of the thigh of his mother. He is the one who gave rise to the Vadavagni as mentioned in the next section:

And that best of Brahmana Rishis, in consequence of his having been born after tearing open his mother's thigh, came to be known throughout the three worlds by the name of Aurva (thigh-born). And those princes regaining their eye-sight went away. But the Muni Aurva of the Bhrigu race resolved upon overcoming the whole world. And the high-souled Rishi set his heart, O child, upon the destruction of every creature in the world. And that scion of the Bhrigu race, for paying homage (as he regarded) unto his slaughtered ancestors, devoted himself to the austerest of penances with the object of destroying the whole world. And desirous of gratifying his ancestors, the Rishi afflicted by his severe asceticism the three worlds with the celestials, the Asuras and human beings.

The next section of the text tells us that he is stopped from causing all this destruction by the Pitris or ancestors who advise him to cast the Vadava fire in the waters:

The Pitris replied saying, O, throw this fire that is born of thy wrath and that desireth to consume the worlds, into the waters. That will do thee good. The worlds, indeed, are all dependent on water (as their elementary cause). Every juicy substance containeth water, indeed the whole universe is made of water. Therefore, O thou best of Brahmanas, cast thou this fire of thy wrath into the waters. If, therefore, thou desirest it, O Brahmana, let this fire born of thy wrath abide in the great ocean, consuming the waters thereof, for it hath been said that the worlds are made of water. In this way, O thou sinless one, thy word will be rendered true, and the worlds with the gods will not be destroyed.'

"Vasishtha continued, 'Then, O child, Aurva cast the fire of his wrath into the abode of Varuna. And that fire which consumeth the waters of the great ocean, became like unto a large horse's head which persons conversant with the Vedas call by the name of Vadavamukha. And emitting itself from that mouth it consumeth the waters of the mighty ocean. Blest be thou! It behoveth not thee, therefore, to destroy the worlds. O thou Parasara, who art acquainted with the higher regions, thou foremost of wise men!'"

The story of how the fire actually reaches the ocean via Saraswati is detailed in the Skanda Purana Section VII.1. 33. 11-100 & Chapter 34:

Ganga said: 11. O Lord, O master of the worlds, I do not have the strength to carry Aurva. He is huge and terrific in form. This Anala (Fire) burns excessively. 12. Thereupon the liberal-minded Lord spoke to Yamuna first, to Sindhu thereafter, and to various rivers severally.

13-15. They were asked by the excellent one among Suras and they proved unable to take (Aurva). Then Janardana, the Lord of Devas, spoke to Sarasvati: “O auspicious one, you yourself go over to the west of the briny sea. If this is carried out, all the Suras will be rid of their fear. Otherwise they will be burned by the Vadava through its refulgence. So, save Vibudhas (Suras) from this terrible fear. O lady of excellent waist, like a mother ^ou alone can bestow freedom from fear on the Suras.”

16-18. On being told thus by Visnu, the powerful one, she said: “I am not free. My father, the ancient one, is waiting. Being a daughter and having Vratas to be performed, I can only do what he orders. A daughter is never independent in the past, present and future. So learned men say. O Hari, without the specific command of my father, I will not move even a step, . So, may some other means be thought of.”

19-20. Having known her attitude, Vasudeva approached Pitamaha (Brahma) and said: “This is the task of Devas. Carry it out. Excepting this virgin daughter of yours, without any apparent defect, no one else can carry the Vadava fire of great prowess.”

21-23. On hearing the words uttered by Visnu, the Great- grandfather sniffed the head of his virgin daughter and said lovingly: “O fair lady, do go. Save all the Devas caught in the midst of fearful danger. Take this Vadava with you and cast it into the salt sea.” On hearing her father’s words she said: Sarasvati said: At your instance, O dear father, I am now setting out undoubtedly. This Vadava fire is very horrendous. He will consume my body.

24-30. It is the advent of the terrible Kali Age now on the earth. O Lord, folks of evil conduct will be coming into contact with me. What can be more painful than contact with sinners! Brahma said: If you do not like the earth’s surface fully infested with sinful folks, do take the Vahni (Fire) to the great ocean con- fining yourself to the Patalatala (nether worlds). If you find yourself exceedingly over-burdened and weary and get scorched by the Vahni pierce through the ground, O dear daughter, and reveal yourself. O lady of wide eyes and excellent waistline, turn your face eastwards. Thereupon, the (other) Tirthas will approach you in that weary state of yours, O lady of charming smiles. O lady of excellent countenance, they will come to you for help. At my bidding thirty-three crores of them will render you help. Do proceed ahead, dear daughter. Do not be worried at any cost. Let your path be free from misfortune and loss. May there be no antagonists.

The goddess then turns into a river and reached the mountain Himavan and emerging from a PLaksha tree and holding the Vadavagni she rushes towards the ocean:

44-48 With the rapidity of her current, she pierced the ground and came to the surface of the Earth. Whenever she (the river) became weary and got scorched by the Vadava fire, the river became visible in the mortal world. Thereupon, Praci (Eastern quarter) became scorched by the Vadava. Thereat all the Tirthas glorified by the ancient seers, O beautiful woman, the Tirthas of heaven, intermediate space and the earth asserted their presence there. On being consoled by them, the river Sarasvati went over to the nether worlds to the ocean, the abode of sharks and crocodiles. O beautiful woman among the Suras, she (river) reached Khadiramoda and there saw the ocean. Afterwards she took up the Vahni and began to proceed onwards. She thought of the fact that it was at the behest of the Lord that she had herself taken up the burden and was there- fore delighted. With a clear conscience, she went ahead facing the South.

Many more adventures happen on the way but by the end of it she is able to deposit the Vadava fire into the ocean at Prabhas.

Not the answer you're looking for? Browse other questions tagged scripture shiva saraswati rivers .

24
Where is the Saraswati river according to Hindu scriptures?
8
How was the world running after Kamadev's death?
10
Who eliminated Manmatha - Lord Indra?
6
Lord Shiva as Adi Yogi taught Yoga to seven sages and in turn these seven sages spread across the world. Is this theory a new look to our mythology?
14
How did Tripura Sundari come into existence?
9
What scriptures mention correlation between Kailasa and Sahasrara?
15
Is there any mention of boon deadlock in scriptures?
9
Do any scriptures describe fish to be vegetarian/Sattvic?
14
Are there any scriptures available (or mention) that are related to GyanVapi mandir?