Is Indradhanush really bow of Indra?

This question came to my mind when I heard/noticed about Indradhanush (hindi/Sanskrit name for Rainbow). So If Indradhanush is really Bow of Indra does it have a significance?

Scientifically Indradhanush is made by Surya and Varuna i.e. Sunlight and Rain Droplets, is it mentioned in Hindu scriptures with same scientific accuracy?

The exact answer is found In Atharva-Veda - Kanda -15 –Sukta 1 - Adhyatma Prakaran Sukta – Verse -6 The Devata of this Sukta is Vrtaya. This entire Sukta Is revering deity Vratya.

He is singularly the leader of the Vratya’s group (Vratya Samuha) , He touched the BOW , which was called Indra-Dhanushya.

You can read the English translation of the verse - Here

Here it is said that the deity Vratya took a bow , touched it . And that is why the Bow is called Indra_Dhanushya.

This Vratya description resembles to Shiva , there are word like Nila-Lohita etc. in that sukta.Which are of Lord shiva. 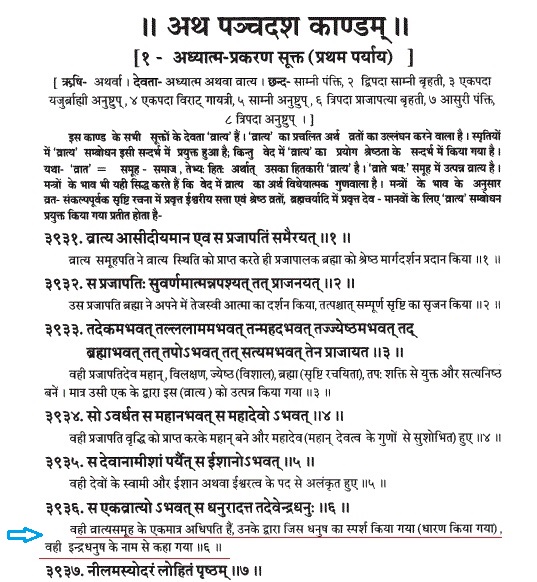 According to Karna, Vijaya dhanush used to be the bow of Indra.

Below is an excerpt from Karna Parva section 31.

My bow, called Vijaya, is the foremost of all weapons (of its kind). Desirous of doing what was agreeable (to Indra), it was made by Vishakarman (the celestial artificer) for Indra. With that bow, O king, Indra had vanquished the Daityas. At its twang the Daityas beheld the ten points to be empty. That bow, respected by all, Sakra gave to Bhrigu's son (Rama). That celestial and foremost of bows Bhrigu's son gave to me. With that bow I will contend in battle with the mighty-armed Arjuna, that foremost of victorious warriors, like Indra fighting with the assembled Daityas. That formidable bow, the gift of Rama, is superior to Gandiva. It was with that bow that the Earth was subjugated thrice seven times (by Bhrigu's son).

Not the answer you're looking for? Browse other questions tagged vedas scripture indra weapon .

13
What scriptures say Indra has right/authority to test sages with Kama, Krodha, lobha, Moha, Madha and Matsarya?
5
What are the weapons used by Indra other than Vajra