In hinduism how has “Kala” or time been described? [duplicate]

Ask Question
Asked 4 years, 10 months ago
Active 3 years, 1 month ago
Viewed 897 times
5
This question already has answers here:
Who is kaal? What is kaal? (3 answers)
Closed 3 years ago.

How exactly time has been defined? And are their any stories related to starting and ending of time in Hinduism scriptures?

Lord Krishna(Narayan) is the Lord of Time

Lord Krishna(Narayan) Himself is time like he is mentioned in Bhagvad Gita:

I am the water-god, and the manes. I am the controller of death. I am the time or death among the healers, lion among the beasts, and the king of birds among birds.

There are many scriptures which is provided the time/kal details 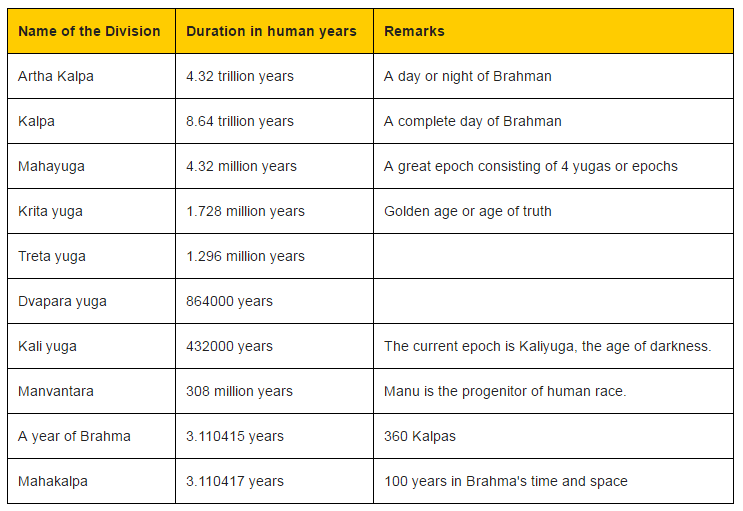 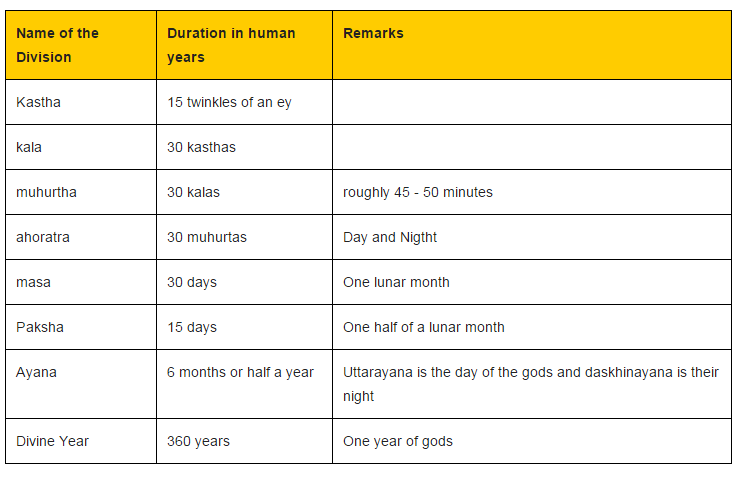 Measure of time. Moments or Káshthás,; day and night; fortnight, month, year,divine year: Yugas, or ages: Maháyuga, or great age: day of Brahmá: periods of the Manus: a Manwantara: night of Brahmá, and destruction of the world: a year of Brahmá:his life: a Kalpa: a Parárrdha: the past, or Pádma Kalpa: the present, or Váráha.

MAITREYA.--How can creative agency be attributed to that Brahma, who is without qualities, illimitable, pure, and free from imperfection?

PARÁSARA.--The essential properties of existent things are objects of observation, of which no fore knowledge is attainable; and creation, and hundreds of properties, belong to Brahma, as inseparable parts of his essence, as heat, oh chief of sages, is inherent in fire.Hear then how the deity Náráyána, in the person of Brahmá, the great parent of the world,created all existent things. Brahmá is said to be born: a familiar phrase, to signify his manifestation; and, as the peculiar measure of his presence, a hundred of his years is said to constitute his life: that period is also called Param, and the half of it, Parárddham. I have already declared to you, oh sinless Brahman, that Time is a form of Vishnu: hear now how it is applied to measure the duration of Brahmá, and of all other sentient beings, as well as of those which are unconscious, as the mountains, oceans, and the like.

Oh best of sages, fifteen twinklings of the eye make a Káshthá; thirty Káshthás, one Kalá; and thirty Kalás, one Muhúrtta. Thirty Muhúrttas constitute a day and night of mortals: thirty such days make a month, divided into two half-months: six months form an Ayana (the period of the sun's progress north or south of the ecliptic): and two Ayanas compose a year. The southern Ayana is a night, and the northern a day of the gods. Twelve thousand divine years, each composed of (three hundred and sixty) such days, constitute the period of the four Yugas, or ages. They are thus distributed: the Krita age has four thousand divine years; the Tretá three thousand; the Dwápara two thousand; and the Kali age one thousand: so those acquainted with antiquity have declared. The period that precedes a Yuga is called a Sandhyá, and it is of as many hundred years as there are thousands in the Yuga: and the period that follows a Yuga, termed the Sandhyánsa, is of similar duration. The interval between the Sandhyá and the Sandhyánsa is the Yuga, denominated Krita, Tretá, &c. The Krita, Tretá, Dwápara, and Kali,constitute a great age, or aggregate of four ages: a thousand such aggregates are a day ofBrahmá, and fourteen Menus reign within that term. Hear the division of time which they measure.

Seven Rishis, certain (secondary) divinities, Indra, Manu, and the kings his sons, are created and perish at one period; and the interval, called a Manwantara, is equal to seventy-one times the number of years contained in the four Yugas, with some additional years: this is the duration of the Manu, the (attendant) divinities, and the rest, which is equal to 852.000 divine years, or to 306.720.000 years of mortals, independent of the additional period. Fourteen times this period constitutes a Bráhma day, that is, a day of Brahmá; the term (Bráhma) being the derivative form.

At the end of this day a dissolution of the universe occurs, when all the three worlds,earth, and the regions of space, are consumed with fire. The dwellers of Maharloka (theregion inhabited by the saints who survive the world), distressed by the heat, repair then to Janaloka (the region of holy men after their decease). When the-three worlds are but one mighty ocean, Brahmá, who is one with Náráyana, satiate with the demolition of the universe, sleeps upon his serpent-bed--contemplated, the lotus born, by the ascetic inhabitants of the Janaloka--for a night of equal duration with his day; at the close of which he creates anew.

Of such days and nights is a year of Brahmá composed; and a hundred such years constitute his whole life. One Parárddha, or half his existence, has expired, terminating with the Mahá Kalpa called Pádma. The Kalpa (or day of Brahmá) termed Váráha is the first of the second period of Brahmá's existence.

You can also refer Shrimad-Bhagvad Puran, For More details of Creation of this world and minute details of creations and time.

The calculation of time with respect to atom is mentioned in third canto of Srimad-Bhagavatam in great detail.

Time is the potency of the almighty Personality of Godhead, Hari, who controls all physical movement although He is not visible in the physical world.

Atomic time as well as gross time(as we know it) is described in subsequent verses.

Atomic time is measured according to its covering a particular atomic space. That time which covers the unmanifest aggregate of atoms is called the great time.

The duration of time of three lavas is equal to one nimeṣa, the combination of three nimeṣas makes one kṣaṇa, five kṣaṇas combined together make one kāṣṭhā, and fifteen kāṣṭhās make one laghu.

It is calculated that there are four praharas, which are also called yāmas, in the day and four in the night of the human being. Similarly, fifteen days and nights are a fortnight, and there are two fortnights, white and black, in a month.

Then 12 months constitute a year. That around 43 Lakh years make one Chatur-Yuga(Divya-Yuga) etc has been described in detail in Shree Krishna's answer. 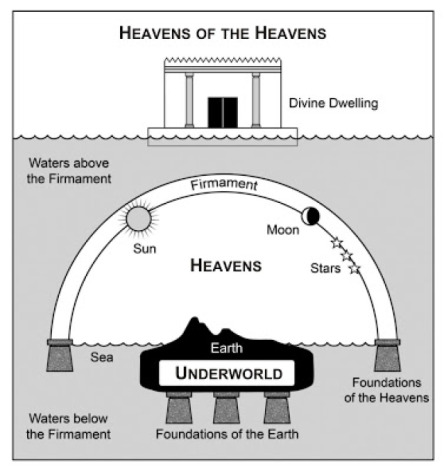 we basically follow time calculation system called Kalpa...a day of brahma is of 4320000000 yrs & so much length is night too...like this 360 day+nights in 1 yr & his life span is of 100(in brahmanda puran it is 108) yrs...now we r at 51st yr's 1st day's 7th manvantar's 28th kaliyuga's 5117th yr...world starting is said like a bubble from karanodakshayi vishnu's body rises..just like story of chinese pangu in 1000 yrs it breaks & 1 man appears...he is brahma & after his 1st day the brahmanda gets filled with water & there appears & resides garbhodakshayi vishnu on who's navel lotus next day brahma rises...btw time speed is different at different places like our 1 yr is 1 day+night of heavenly gods..our 1 month is 1 day+night of pitr...any more further info u need tell me!:)

& sorry i have to find iskcon's those so many articles like on 1 article i can't tell i got all this info...it took various articles but iskcon will support as yes they do say so!sorry my tantrums again but pls pardon as i have a point in answer so..sorry me very casual type guy so pardon pls pls i can prove why my answer right but tell me what exactly i didn't told so as all i understood was this & i know i m mistaking somewhere so...

Not the answer you're looking for? Browse other questions tagged vedas puranas .

5
Who is kaal? What is kaal?
16
Why Lord Shiva is depicted as Lord of Time?
7
What is the Hindu view of time?
2
Question about Dwapara Yuga and Treta Yuga

7
What is the “essence of the earth and heaven” given by Brahma to sage Gautama at his marriage?
17
How has Lord Vishnu's understanding developed and what was his role initially?
13
Do we have any record of events in any previous Kaliyuga?
3
Description of seasons in Hindu Scriptures
12
Can it be precisely known exactly how much amount of Vedas has been lost?
4
Do any Hindu scriptures say that Hinduism is not a religion but simply a way of life?
4
How has Hell been described in the Vedas and Upanishads?