What are the symbols and weapons in the hand of Sadashiva?

Sadashiva is described as being eternal form of Lord Shiva. He is represented with Five-faces and ten hands. The five heads of Sadashiva are known as Sadyojata [West facing], Vamadeva [North facing], Aghora [South facing], Tatpurusha[East facing] and Ishana [Upward facing]. He is shown with weapons and various symbolisms in his 10 hands. 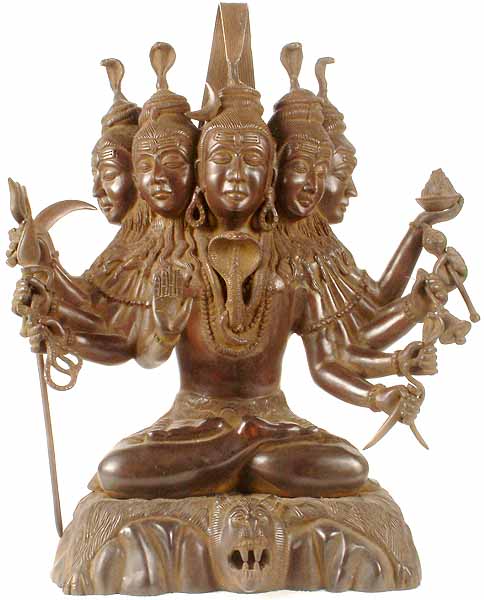 What are these weapons and symbolisms that are in the hands of Sadashiva? And what do they Signify?

Kamika Agama is one of the principle Shaiva Agamas. It was revealed from the Ishana face of Sadasiva. It describes weapons, symbols and form of Sadashiva as:

Five faces; ten shoulders; effulgence of crystal; three eyes; tranquil composure; crest adorned with the crescent moon; locks of matted hair bound with serpent; mounted on the lion-throne constituted of mantras; seated on the white lotus(designed on the throne); adorned with various ornaments such as the ear-rings, karnika, hara, kati sutra, bandhana, keyura, kataka, channavira and others; eternal age of sixteen years; supremely beautiful and auspiciously charming; face beautified with gentle smile; holding the trident, parasu, khadga, vajra and fire in His right hands; holding the abhaya-mudra, pasa, ghanta, naga and ankusa in His left hands. Or, the weapons held in the hands are told in a different way. Varada-mudra, abhaya- mudra, khadvanga, sakti and sula in the right hands; damaru, sarpa, aksha mala and indivara-flower in the left hands. Lord Sadasiva should be meditated as associated with these lineaments. [Kamika Agama 330-334]

So the weapons and symbols in right hands are:

The weapons and symbols in left hands are:

His three eyes are to be considered as symbolizing the three powers- iccha, jnana and kriya; the cresecent moon denotes His power of all-knowing; ten hands represent the ten directions; the trident denotes His three qualities –sattva, rajas and tamas functioning in the pure realm; parasu denotes His nature of eterenal existence; khadga represents His invincible prowess; vajra denotes His state of unshakable firmness; fire denotes His destructive power, the power which incinerates the roots and knots of bondage and the luminous power which illumines the objects of the worlds for the sake of those existing in the pure maya; the naga denotes the power of supporting and sustatining everything and the power of disposing the things allocated to all the beings; pasa denotes the three bonds- maya, karma and mala; the ghanta represents the the nuture of basic sound which makes known the the form constituted of mantra; abhaya-mudra denotes His power of protecting all the worlds; ankusa represents the power of regulating and meting out the enjoyments obtainable to the souls according to their karmic fruits and controlling the souls to experience only those pertaining to them. In this way, the weapons held in His ten hands should be understood as representative of the power relevant to each of them. [ Kamika Agama 335-340]

Thus the symbolic significance is as:

Not the answer you're looking for? Browse other questions tagged shiva shaivism symbolism weapon agamas .

2
How Lord Shiva got name as "PanchaMukhan" and when did he become Five faced?
8
What is the meaning behind Shiva with 26 heads and 52 hands?
3
5 Incarnations of MahaDeva

8
What is the significance of weapons? Why do gods carry multiple weapons?
5
How much destructive the earlier weapons were?
13
Does Sadashiva ride a tortoise?
5
What are the weapons used by Indra other than Vajra
13
What is the significance of the weapons and other items held by the Lord Vishnu?
2
When Shiva has five faces how does Subramanya have six faces?
5
What are the differences between the names Parashiva, Paramashiva, Rudra, Sadashiva and Shiva?
2
Is the roudra weapon really the same weapon as the pashupata weapon?