There are different symbols present on Lord Vishnu's Lotus Feet, I found from Internet,But my question is that what they represent and Is there any evidence in Scripture and Is there any meaning behind this symbols.? 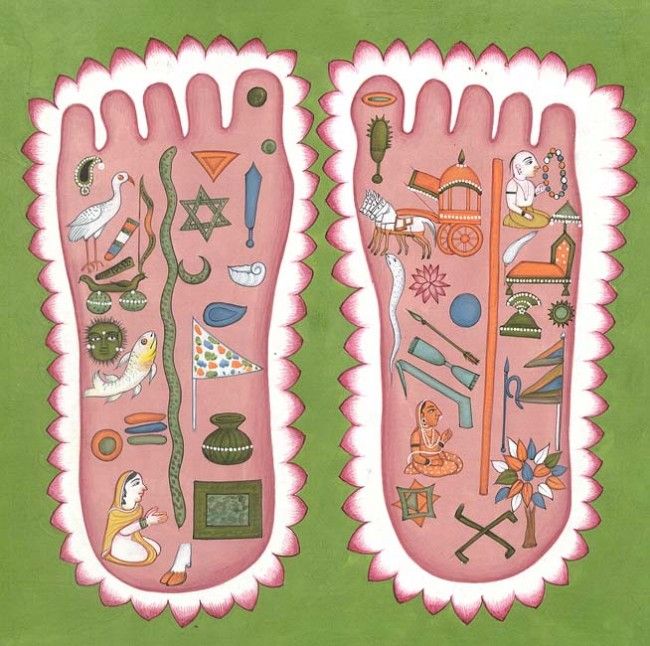 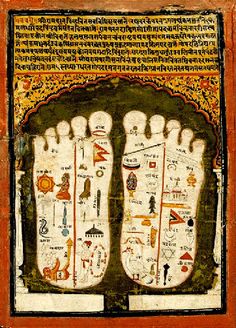 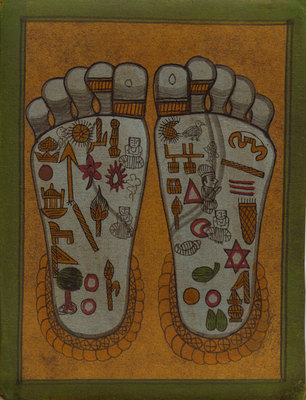 Jaya Nitai! Accept my Pranams. My Gurudeva compiled a few meanings of these auspicious marks on the hands and feet of the Lord, which you can read here:

Note, here my Gurudev is talking about the marks on the Lotus Feet and Hands of Sri Sri Nitai Gauranga Bhagavan (whom we Gaudiyas worship as non-different from Sri Sri Balaram Krsna), so these meanings can also be applied to Lord Vishnu too. The Gaudiya acharyas wrote quite a lot on this. Jiva Goswami wrote a short work called "Shri-kara-pada-yugala-samsmrti", which reveals the meanings of the marks on the Lotus Hands of Sri Radha Krsna. You can read the descriptions from that here:

This is the closest I can find online, to the meanings of these auspicious symbols.

edit: So I will give you a few quotes of the most important marks:

Conch (shankha) - This auspicious mark indicates that those who take shelter of The Lord lotus feet are always rescued from all sorts of distress. Just as during the arati ceremony the conchshell is used to hold water that is offered directly after the fire of the ghee-lamp, similarly His feet hold transcendental water that soothes Their devotees from the blazing fire of material miseries.

Fish (matsya) - This mark shows that just as a fish cannot live without water, similarly the surrendered devotees cannot live a moment with-out directly associating with The lotus feet of the Lord and His Holy Names.It also means that the mind is very fickle, just like a fish who wavers this way and that, and so only after much medita-tion on Their lotus feet while chanting Their Holy Names it will finally become steady and fixed of the Lord. It also indicates that Their feet will come to live in one's heart only if the heart has been liquified by soft loving emotions; Their feet do not thrive where it is dry. And it is a reminder that during the great universal devastation and flood Lord Hari assumed the form of Matsya, the fish-incarnation, and thereby saved His devotees.

Lotus (kamala) - This mark increases greed for nectar in the minds of the beelike devotees who meditate on The lotus feet of The Lord. Furthermore, This mark also shows that the goddess of fortune, Shri Lakshmi Devi, always resides at His feet rendering humble service. It signifies that His feet are so soft that they can only be compared to lotus petals; indeed, upon first glancing at Their lotus feet. you would think you are directly seeing fresh lotus blossoms. It also reveals that just as a lotus blooms by day and contracts by night, similarly those who remain steeped in meditation on the Lotus Feet and Holy Names of Their Lordships always feel the blossoming unfolding of' brilliant spiritual ecstacies that dispel the darkness of ignorance. This mark also indicates that just as bees live inside lotus flowers, similarly the minds of the Vaishnavs always reside in the nectar of Their lotus feet. It also shows that this lotus (or consciousness of Their lotus feet) will not grow unless there is profusion of prema-jala or the water of pure divine love. It also means that the bee of the devotee's mind cannot fly beyond the bondage of gyana (speculative knowledge) and vairagya (renunciation) without the temptation offered by the superior nectar of Their lotus feet. It denotes that

Barleycorn - This mark signifies that the devotees of The Lord receive all enjoyable opulences of prosperity by serving Their feet. It also means that once one finds shelter at Their feet and Holy Name, then the devotee's former journey through many many births and deaths is actually very tiny, just like a single grain of barley. It further demonstrates that just as the barley grains are the sustenance of life for living beings, similarly it is widely celebrated that Their glorious feet are the nourishment for all souls.

Disc (chakra) - This mark cuts down the six enemies of The devotees of The Lord - lust. anger, greed, illusion, envy, and bewilderment. It indicates tejas or the principle of brilliance by which. They destroy the darkness of sin from within Their own devotees' hearts.Furthermore, this mark on Krsna's feet shows that He is the ruler of His own kingdoms formed by the circle of Navadvipa-mandala and Vraja-mandala.

Half-moon (ardha-chandra) - This mark symbolizes how The lotus feet of Their Lordships truly accomplish the desired objectives of the devotees. It signifies that even gods like Lord Shiva have decorated their own heads with the soles of Their feet and their mouths by Their Holy Name. It also shows that devotees who likewise decorate their own heads with Their feet can become exalted like Shiva. Just as the moon showers nectar with its cooling rays, similarly Their feet shower nectar upon Their devotees, extinguishing the three-fold material miseries. So that the minds of thedevotees may reside at Their feet. They bear the symbol of the moon (which is the devata or presiding deity of the mind) upon Their feet. Just as the moon is one, yet destroys the darkness seen by many people simultaneously, similarly the Lord Gauranga is one and yet by His cleverness can deliver many souls at the same time. The half-moon also indicates that since Their toenails appear like ten splendorous full moons, the real moon has shriveled up in shame and appears in half-form. It also means that the half-hearted attempts of those who are abhakta (improperly devoted), kurasika (relishing transcendental topics with the wrong attitude); and kutila (crooked or duplicious) cannot approach Their feet. Also, just as the half-moon is in the process of increasing, similarly the benefit for one who is day-by-day expanding the glorification of Their feet and Holy Names in a spotless manner certainly increases.

There are many more beautiful meaning but there are the primary ones.

Not the answer you're looking for? Browse other questions tagged vishnu scripture symbols .

4
Where does sage Vashishta describe Vishnu's immeasurable greatness?
5
Why even Lord Vishnu put Tilak (Gopi-Chandan) on his forehead?
4
Actual origin of Ganga was from Lord Vishnu's Lotus feet?
5
Do Scriptures confirm about the “Swayambhu” nature of Shalagramas and Banalingas?
5
How did sanatkumars reach Lord Vishnu's abode?
7
Which Acharyas believe in the two-Kapilas theory and which don't?
7
What is Adi Shankara referring to when he says “He has Vajra marks on his feet”?