Are all incarnations of Vishnu born at moonrise?

In Vedic astrology, the sidereal zodaic, the band of stars surrounding the Sun's apparent path in the sky, is divided into 12 equal Rashis or zodiac signs. A person's Janma Rashi is the zodiac sign that the Moon appears in at the time of their birth. And a person's Janma Lagna is the zodiac sign that appears at the Eastern horizon at the time of their birth. For example, my Janma Rashi is Rishabha or Taurus, and my Janma Lagna is Simha or Leo; see my birthchart here. (I actually have the same Nakshatra and Rashi as Krishna!)

Now in my case, my Janma Rashi is different from my Janma Lagna, but based on scriptural descriptions of their births, I found out that in the case of Rama and Krishna they're the same. Rama had Karkata Rashi and Karkata Lagna, and Krishna had Ribhasa Rashi and Rishabha Lagna; see this answer. And I just found out that Chaitanya Mahaprabhu, whom Gaudiya Vaishnavas consider to be an incarnation, had Simha Rashi and Simha Lagna. And Ramanujacharya, whom Sri Vaishnavas (like myself) consider to be an incarnation, had Karkata Rashi and Karkata Lagna, just like Rama!

So my question is, is there some kind of rule that all incarnations of Vishnu have their Janma Rashi and Janma Lagna as the same? Now if someone's Janma Rashi is the same as their Janma Lagna, that would mean that at time of their birth, the moon was aligned with a certain zodiac sign, and the Eastern horizon was aligned with the same zodiac sign, so the moon and the Eastern horizon were aligned with each other. That means that all the figures mentioned above were born at moonrise, i.e. the time when the moon first emerges in the sky (which is not necessarily at night).

So are there any scriptures which say that incarnations of Vishnu are always born at moonrise? By the way, if I'm not mistaken the orbit of the moon relative to the Earth and the rotation of the Earth relative to the fixed stars (in the sidereal zodiac) are completely uncorrelated, so the probability that Rama, Krishna, Chaitanya Mahaprabhu, and Ramanujacharya would all have this property by chance is less than 1 in 20,000. So clearly something is going on here. Do any works on Vedic astrology say that there's something special about people born at moonrise, and do all incarnations of Vishnu belong to this category? What about at least the Purna Avataras?

This is a well kept secret of Achyuta Nanda tradition of Jyotish which roots back to Chaitanya Mahaprabhu himself, and has been recently been revealed by Pt. Sanjay Rath and his students through various texts.

So my question is, is there some kind of rule that all incarnations of Vishnu have their Janma Rashi and Janma Lagna as the same?

Almost there. The exact rule (a part of it, to be precise) is:

Moon should be placed in the lagna, and the nakshatra occupied by it has to be same as the Lagna Nakshatra for the Jataka to qualify as an amsha or purna avatar of Visnu.

This of course is not the only criteria, but one of the principal ones used for confirming as well as debunking avatar claims.

Infact, using these set of rules, one can easily conclude that Gautama Buddha was not an avatar of Vishnu. 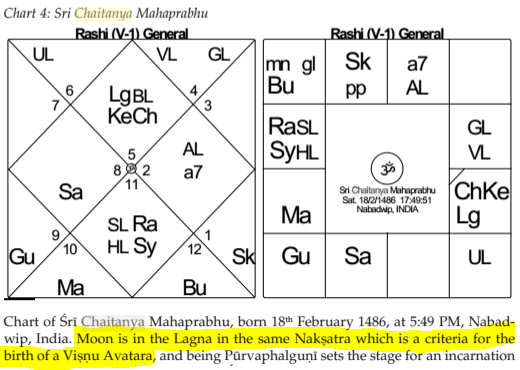 This is an excerpt from the book Jyotish Fundamentals by Visti Larsen, who happens to be one of the students of Pt. Sanjay Rath.

Not the answer you're looking for? Browse other questions tagged vishnu krishna avatars astrology .

40
Why doesn't Shiva worship anybody where as Vishnu worships him in all his incarnations?
3
In jyotish (vedic astrology), how is a sign (rasi) ruled by a planet (graha)
6
राशि(zodiac sign) of Krishna and Rama
11
Did Rama or Krishna ever practise meditation?
6
What is the story of Narasimha being born in the ocean?
11
Why are the names of Lord Krishna and Lord Rama superior to the name of Lord Vishnu?
24
Are there any scriptures that portray Lord Rama to be the source of all incarnations including Lord Vishnu?
6
What exactly are incarnations according to Sri Vaishnavism?