Did the story of Mahabharata start (and end) with a dog?

Some people say that the tale of Mahabharata starts and ends with a dog. When they say ends with a dog, they are referring to Yama-disguised-as-a-dog who follows Yudhishtira and other Pandavas on their final walk up the Himalayas to retire from the world. This is narrated in the Mahaprasthanika Parva of the Mahabharata and the picture below depicts the scene. 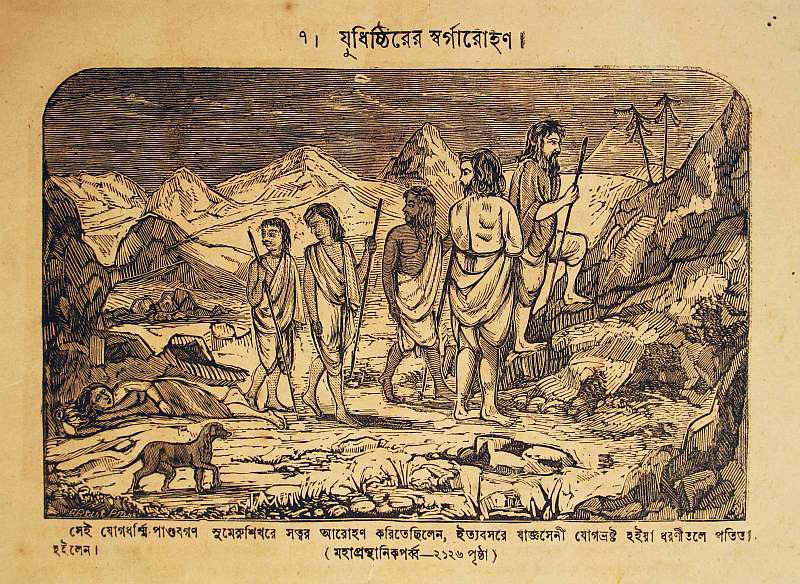 But where is the story of Mahabharata starting with a dog narrated?

This Wikipedia article has the following picture of Janamejaya's brothers beating up a dog which came to see the yajna proceedings just out of curiosity. 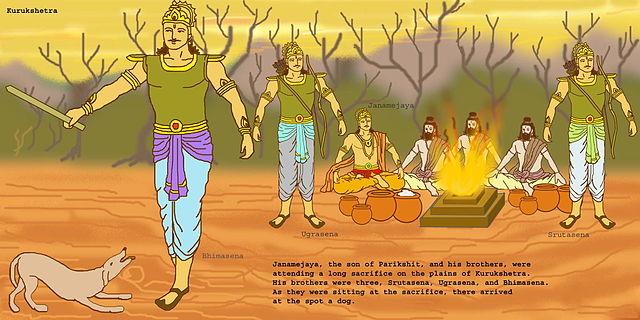 Yes, it is true that Mahabharata starts with a dog. The story is mentioned in Adi Parva, Section 3 (Paushya Parva) as follows:

Sauti said, "Janamejaya, the son of Parikshit, was, with his brothers, attending his long sacrifice on the plains of Kurukshetra. His brothers were three, Srutasena, Ugrasena, and Bhimasena. And as they were sitting at the sacrifice, there arrived at the spot an offspring of Sarama (the celestial bitch). And belaboured by the brothers of Janamejaya, he ran away to his mother, crying in pain. And his mother seeing him crying exceedingly asked him, 'Why criest thou so? Who hath beaten thee? And being thus questioned, he said unto his mother, 'I have been belaboured by the brothers of Janamejaya.' And his mother replied, 'Thou hast committed some fault for which hast thou been beaten!' He answered, 'I have not committed any fault. I have not touched the sacrificial butter with my tongue, nor have I even cast a look upon it.' His mother Sarama hearing this and much distressed at the affliction of her son went to the place where Janamejaya with his brothers was at his long-extending sacrifice. And she addressed Janamejaya in anger, saying, 'This my son hath committed no fault: he hath not looked upon your sacrificial butter, nor hath he touched it with his tongue. Wherefore hath he been beaten?' They said not a word in reply; whereupon she said, 'As ye have beaten my son who hath committed no fault, therefore shall evil come upon ye, when ye least expect it.'

"Janamejaya, thus addressed by the celestial bitch, Sarama, became exceedingly alarmed and dejected. And after the sacrifice was concluded returned to Hastinapura, and began to take great pains in searching for a Purohita who could by procuring absolution for his sin, neutralise the effect of the curse.

Not the answer you're looking for? Browse other questions tagged mahabharata pandavas animals janamejaya .

5
What is the role of dogs in Hinduism?
7
Why was Yudhishtira accompanied by a dog during the ending stages of his life?
2
Wolves appear often in religion, with many wandering, houseless people/deities having wolves as companions Why, then, are there no domesticated dogs?

4
Did Kaurav's son participate in the Mahabharata battle?
11
Story of a rishi converting a dog to a dragon that tries to eat the same rishi
2
How did the Ramayana and Mahabharata wars officially end?
7
Why was Yudhishtira accompanied by a dog during the ending stages of his life?
6
Sahadeva knew future events in Mahabharata. How many times did he use this knowledge in Mahabharata?
8
What is the story of Kichak and Draupadi?