How many lokas are there?

I know very little about what Hindus believe about the existence of different lokas (worlds). For example:

I want to know, - Exactly how many lokas (or worlds) are there? - Who lives there?

I just know that we people live on Bhuloka (Earth).

I heard once there are 54 lokas but I don't know anything about them.

Besides just listing 14 Lokas, I think an answer describing bit about who lives in each Lokas would be useful. Though one answer is already there but it is unsourced. So, I am here posting an answer with references:

Sources I do have: Recently while reading Vyasabhashya on Yogasutras of Patanjali, I have found that in his commentary on Yog Sutra 3.26, Vyasa described 7 Khanda of Prithivi and 14 Lokas in detail. I wanted to cite Shastra than commentary so, needed to refer Puranas. I have only Bhagavata Purana and Vishnu Purana unabridged to refer.

Urdhva Lokas (7 Lokas above Prithivi) are described in Vishnu Purana 2.7

2.7.1 Maitreya said-The sphere of the whole earth has been described to me by you, excellent Brahmana, and I am now desirous to hear an account of the other spheres above the world, the Bhuvar-loka and the rest, and the situation and the dimensions of the celestial luminaries.

I'm quoting a text from commentary of Vyasa. Vyasa's text is good in classifying these 7 Lokas and in describing who lives on them. Vishnu Purana should be refereed to learn the time and space aspect of these Lokas.

So, we see that 7 Urdhva Lokas are well described by Vyasa in his commentary and also in Vishnu Purana. But 7 Patala Lokas are not described in detail. They are described comprehensively in Bhagavata Purana. 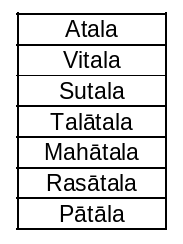 So, Quoting from Bhagavata Purana 5.24:

Similar information regarding 14 Lokas can be found from other Puranas.

Patala-loka (where dwell the snakes)

Yama-loka (where the evil get punishment for sins)

I don't think there could be 54 lokas. These are all of them.

Most of them are where a soul or living being goes (if they are not reborn) after death on the basis of their karma.

We live on Bhu-lok (our dear dear Earth).

Not the answer you're looking for? Browse other questions tagged lokas .

3
What are the different types of Lokas?
6
In which lokas are the Apsaras born and which other lokas do they go on to inhabit?

4
Gayatri mantra and three Lokas (planes)
9
Where are Heaven and Hell?
12
Want to know about Brahmaloka
13
Interpreting Bhagavad Gita verse 8.16
6
In which lokas are the Apsaras born and which other lokas do they go on to inhabit?