More information about the idea of Asvattha, the tree of transmigration found in Chapter 15 of Bhagavad Gita 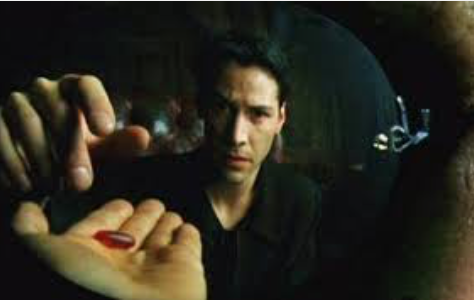 Almost a decade ago I saw the movie the Matrix. I had to see it twice to understand the full idea. It seemed like a new idea at the time: that the world we live in is just an imaginary world; in the real world we are enslaved by machines.

Now in the course I took on meditation, the instructor, Robert Wright, mentioned that many people he spoke to drew parallels between the movie The Matrix and and also Buddhism.

It wasn't until I picked up the Bhagavad-Gita sometime after seeing the movie that I was able to see the same idea in the Asvattha Tree, the tree of transmigration found in Chapter 15 of the Bhagavad Gita.

Its branches spread from earth to the heavans, and the powers of nature give them life. Its buds are the pleasures of the senses. Far down below, its roots roots stretch into the world of men, binding a mortal through selfish actions.

Men do not see the changing form of the that tree, nor its beginning, nor its end, nor where its roots are. But let the wise see, and with the strong sword of dispassion let him cut this strong strong-rooted tree, and seek that path where-from those who go for refuge never return...

I also found a picture of the Asvattha tree that I found in a book owned by my aunt. 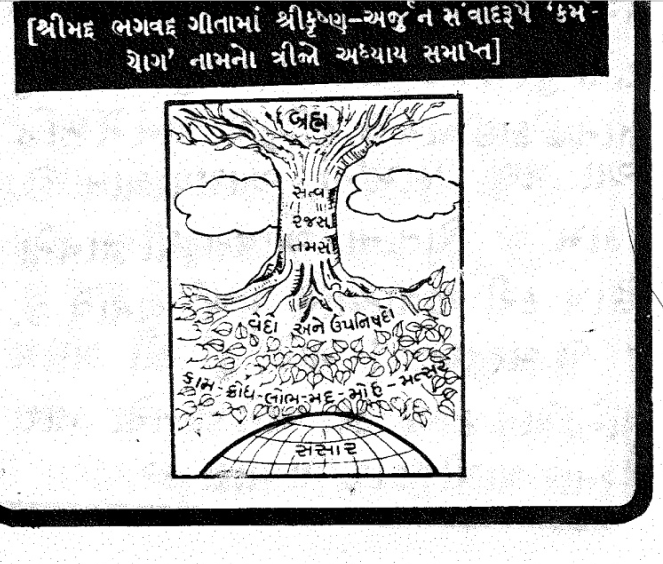 I'm really fascinated by this idea.Are there any other mentions of the Asvattha tree anywhere else that I can go to to find out more information? Is the tree mentioned in any of the commentaries?

bhagavad-gita philosophy
Share
Improve this question
edited May 21 '17 at 17:36

'There is that ancient tree, whose roots grow upward and whose branches grow downward;--that indeed is called the Bright, that is called Brahman, that alone is called the Immortal. All worlds are contained in it, and no one goes beyond. This is that.'

You may also read the commentaries by Shri Shankaracharya, Shri Ramanuja etc of the 15th chapter of Bhagavad Gita.

15.1 The Blessed Lord said They say that the peepul Tree, which has its roots upward and the branches downward, and of which the Vedas are the leaves, is imperishable. He who realizes it is knower of the Vedas.

15.1 Urdhva-mulam, that which has its roots upwards:- Brahman, possessed of the unmanifest power in the form of Maya, is referred to by the word 'upward' because of Its subtleness in point of time by virtue of Its being the Cause, and also because of Its eternality and vastness; and That is the root (mulam) of this world. The Tree of the World which is such, is urdhva-mulam. This accords with the Upanisadic text, 'This has its roots above and branches below' (Ka. 2.6.1). In the Purana also we have: It sprouts from the Root in the form of the Unmanifest; it grows through the sturdiness of that very One. And it has abundance of intelligence as its trunk, and the appertures of the organs as the hollows. The great elements are its boughs [A.G. takes the word visakha (boughs) in the sense of stambha, perhaps meaning the aerial roots.-Tr.]; so also, it has the objects of perception as its leaves. It has virtue and vice as its beautiful flowers, and happiness and sorrow are the fruits it bears. This eternal Tree presided over by Brahman is a means of livelihood to all creatures. And this verily is the resort of Brahman [Or, etat brahma-vanam means: This Tree has Brahman as its object of adoration, its support. For, the world has nothing but Brahman as its support.] in it Brahman dwells for ever. Having felled and split this Tree with the great sword of Knowledge, and then attaining the bliss of the Self, one does not return from that (bliss).' (Cf. Mbh. As. 47.12-15.) That Tree which has its roots upwards and is constituted by the enchantment of mundane existence, and adhah-sakham, which has the branches downwards-mahat, [See under 7.4.-Tr.] egoism, subtle elements, etc. are its branches (sakhah), as it were, extending downwards (adhah); so, it has its branches downwards-; that Tree with its branches downwards, which does not (a) last (stha) even for the morrow (svah), is asvatthah (lit. Peepul tree). Ahuh, they say; that the asvatthah, Peepul Tree, undergoing destruction every moment; is avyayam, imperishable, and constituted by the enchantments of mundane existence. Having been in existence from time without beginning, that Tree of the World is imperishable. It is, indeed, will known as the sustainer of the beginningless and ceaseless series of bodies etc. They call that the imperishable. Of that very Tree of the World here is another alification: Yasya, that Tree of the World of which; chandamsi-chandas being derived in the sense of covering (protecting)-, the Vedas in the form of Rk, Yajus and Sama; are the parnani, leaves, as it were. As leaves serve as protectors of a tree, so the Vedas serve as the protectors of the world; for they reveal what are virtue and vice as also their causes and results. Yah, he who; veda, knows; tam, that-the Tree of the World along with its root, as has been explained; sah, he; is a vedavit, knower of the Vedas, i.e. versed in the meaning of the Vedas. Since, apart from this Tree of the World along with its root, not even an iota of any other thing remains to be known, therefore he who knows the purport of the Vedas is omniscient. In this way the Lord euligizes the knowledge of the Tree together with its root. An imagery of the other parts of that very Tree of the World is being presented:

15.1 The Lord said The Vedas speak of the imperishable 'Asvattha tree' called Samsara, which has its 'roots above and branches below', in such passages as the following: This Asvattha tree with its roots above and branches below is eternal' (Ka. U., 6.1), and 'He who knows the tree with its roots above and branches below' (Tai. A., 1.11.5). It has its roots above since it has its roots in Brahma (the Creator otherwise known as Hiranyagarbha) who is seated above the seven worlds. It has 'branches below' ending with denizens like men, animals, beasts, worms, insects, birds and immovables. It is 'immutable' since it cannot be felled, being of the form of a continual flow. It can be felled only at the dawn of perfect knowledge which causes detachment. They say that the leaves of this Asvattha tree constitute the Vedas. 'The Vedas are said to be the leaves', since this tree of Samsara increases by actions prompted by worldly desires as taught in certain Srutis as, 'He who desires prosperity should sacrifice a white animal to Vayu' (Taitt. Sam., 2.1.1) and 'The desirer of offspring shall offer to Indra and Agni a sacrifice with eleven cups of rice-cakes' (Ibid., 2.2.1). Indeed the tree flourishes with the help of leaves. He who knows the Asvattha of such a nature 'knows the Vedas'. The Vedas also set forth the means of felling this tree of Samsara. He who understands this is called the knower of the Vedas, since knowledge of the nature of the tree to be cut off is helpful to the knowledge concerning the means of felling the tree. This tree spreads downward with men etc., who are the products of their Karma, as branches. It again spreads above into Gandharvas, Yaksas, gods, etc. They are nourished by the Gunas of Sattva etc. They have tender shoots augmented by sense-objects. How does this happen? Sri Krsna explains:

Not the answer you're looking for? Browse other questions tagged bhagavad-gita philosophy .