What is the story of Rameshwaram Jyotirlinga? 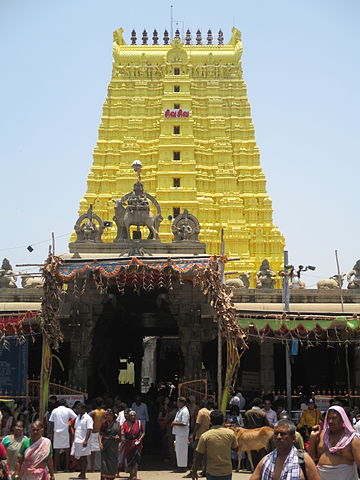 Lord Rama worshipped Lord Shiva in Linga form during the Setubandha event and Lord Shiva established himself as Jyoti Swarupa there and that Linga became popular as Rameshwaram Jyotirlinga.

Rameshwaram is one of the popular pilgrimage site and it is one of the Char-Dham. Rameshwara Jyotirlinga is described in several Puranas like Shiva Purana, Brahmanda Purana, Padma Purana, etc..

In the Adhyatma Ramayana of Brahmanda Purana, Lord Rama gives boon that "Whoever after having Darshan of Rameshwara Mahadeva, goes Kashi and brings water in pot and offers to Rameshwara and throws that pot to sea, He gets salvation."

Here is how Yuddha Kanda of Adhyatma Ramayana of Brahmanda Purana narrates the event:

One may get confused whether Rama installed idol form or Linga form. But it is Linga form and Lord Rama himself states it in Padma Purana Patala Khanda chapter 104:

Oh, how is it that Vibhisana seeing the Linga of Shiva, (called) Ramesvara and installed by me, is bound with chains.

In the above verse Rama tells "Mat Sthapitam Shiva Linga"... ie. That Shiva Linga installed by me.