What is the story of Nageshwar Jyotirlinga? 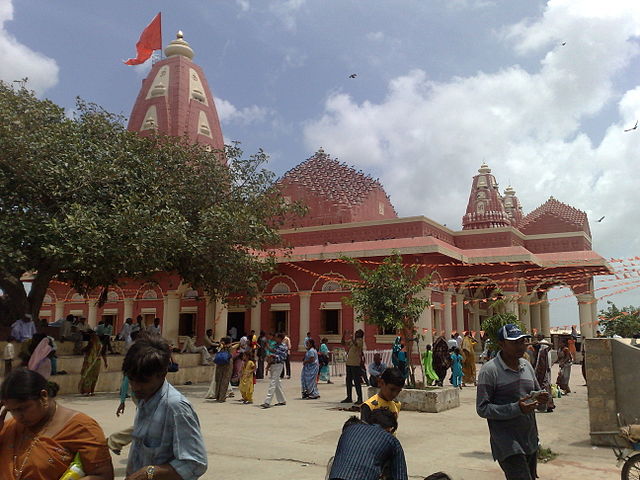 Shree Nageshwar Joytirlinga Temple or Nagnath Temple is located on the route between Gomati Dwarka and the Bait Dwarka Island on the coast of Saurashtra in Gujarat state of (India).

In this Jyotirlinga lord Shiva is worshipped as Nageswara form . Two other sites with same name are in India, one near Audhgram near Purna in Andhra Pradesh and another near Almora in Uttar Pradesh also enshrine temples to Nageswara. The actual location of the legendary forest of Darukavana is debated. No other important clues indicate the location of the Jyotirlinga. 'Darukavana' remains the only clue. See

Nageshwar was believed to be known as 'Darukavana', which is an ancient epic name of a forest in India. Below are two well-known legends attached to this mystical temple:

Their is a special feature of this Nageshwar Shivlinga apart from round black-stoned Shivalingas, this one is made up of Dwaraka Shila, a raw yellowish stone with sharp edges comprising of small chakras. The Linga at Nageshwar is a Tri-mukhi Rudraksha which is around 40 cm high and 30 cm in diameter. At Nageshwar we can also find goddess Parvati along with the Shivlinga.

Literally, the word Nageshwar is given to the Lord of all Cobras (Naag) who is always found coiled around the neck of Lord Shiva. Hence, it is said that any person who prays at Lord Nageshwar Temple permanently attains a poison free mind and body. The temple has great mythological importance i hinduism and it is believed that Lord Krishna used to pay his obeisance to Lord Shiva by performing Rudrabhishekam and in the later period Shree Shankaracharya founded his Western Math here at Kalika Peeth.

According to the first legend, 'Balakhilyas', a group of dwarf sages worshipped Lord Shiva in Darukavana for long a time. To test their devotion and patience, Shiva came to them as a nude ascetic wearing only nagas [serpants] on his body. Wives of sages got attracted to the saint and went after him, leaving their husbands behind. Sages got very disturbed and outraged by this.They lost their patience and cursed the ascetic to loose his linga [one of the limited meanings is Phallus, but it has has a deeper theistic symbolism]. Shiva linga fell on the earth and the whole world trembled. Lord Brahma and Lord Vishnu came to Lord Shiva, requesting him to save the earth from destruction and take back his linga. Shiva consoled them and took back his linga. [From Vamana Purana CH.6th & 45th]. Lord Shiva promised his divine presence in Darukavana as 'jyothirlinga' for ever.

goes hundreds of years ago in the Shiv Purana, about a demon couple named Daruka and Daruki, after whom was named Daruka Van (forest), later known as Dwarka. Daruki was a devotee of Parvati and was blessed by her. He misused her blessings and tryranized the local folks. One day he captured a Shiva devotee called Supriya who was one of the pilgrims on a boat. The demon imprisoned her along with several others at his capital Darukavana. Supriya advised all prisoners to recite the Shiva mantra ‘Aum Namaha Shivayay’ to protect them. When Daruka came to know about this he ran to kill Supriya. Instantly Lord Shiva appeared in the form of a jyothirlinga from the earth. He could not kill the demon who was blessed by his own wife, Parvati, but he assured Supriya that he would protect him in the form of a linga. The linga here thus came to be worshipped. Source - One and Two

**Add original source of this if found.