Do the gods incarnate as mythical creatures in other lokas?

Gods are often born on Earth (Bhulok). As you know these incarnations are known as avatars. A popularly known avatars is Shree Krishna. However as per my knowledge, avatars are born as humans (Manava) on Bhulok. Are there any avatars who are not Manavas, e.g. Apsaras, Nagas in other lokas? If not, why don't the gods incarnate as mythical creatures in other lokas?

Yes it would seem that the Avatars of the Lord are more numerous on Earth. But that is only because the scriptures that we have talk in more detail about our own Loka or the ones that are relevant to us rather than the others with whom we have no connection.

Shrimad Bhagavatam Canto 8. Chapter 14 clearly mentions that the Avatars in different Manvantars are for the guidance of Manu, the sons of Manu, the rishis and other beings. Even if we just see the list of Manvantars, we can still find some Avatars who were neither born on Earth nor lived here: 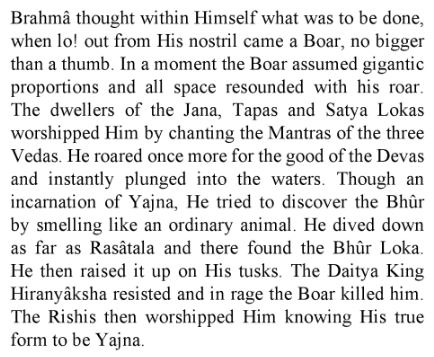 We can see from these examples that the Lord is definitely born in different forms all over his creation wherever he is required & there may be more that are not recorded in our scriptures.

10
How did Nahusha marry Viraja, daughter of the Pitris?
20
Partial and full incarnations: When divine beings incarnate on earth, do they continue to exist in their original abode?
6
Does Karma (going from a higher life-form to a lower one) only apply to humans?
2
Does Lord Narayana take incarnation to change era?