What is the story of Kasi Vishwanatha Jyotirlinga?

Vishwanatha temple is situated on the bank of River Ganga in Varanasi, Uttar Pradesh. 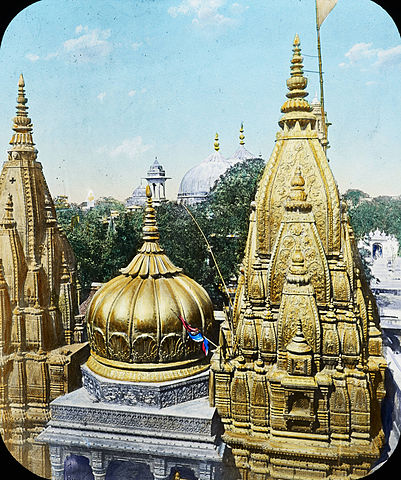 The Greatness of Kasi (Varanasi) and Kasi Vishwanatha Temple are described in many Puranas. Kasi is known as Avimukta Kshetra. Chapter 22 of Kotirudra Samhita of Shiva Purana describes the origin of city of Kasi and Lord Vishwanatha in detail.

During creation, Nirguna Brahman got split into a Purusha and Prakriti (Saguna form as Shiva-Shakti; metaphorically Atma and Nature). The Nirguna Brahman (Sada Shiva) ordained Suguna forms to do a Tapasya for creation of first best being.

Whatever things are visible on earth as substantive, as an entity in the form of knowledge or bliss, are eternal, free from blemish, desired for a second. That second, of the tree of salvation, was possessed of attributes and is called Śiva.

It split into two- the male and the female forms. The male is known as Siva, while the female is shown as Sakti (Saguna forms).

Thereafter a divine voice emerged out from the great Atman free from attributes, “You perform penance, for the generation of the excellent creation.”

Then these Purusha-Prakriti or Shiva-Shakti asked the Supreme Nirguna SadaShiva the place where they could do tapasya. The Nirguna Shiva by staying in Sky or Cosmos then created wonderful city of five Koshas in length in cosmos. Then Lord Vishnu did Tapasya in that city and waters emerged from Him and the creation happened. The Jewel of his ear fell on a place on Earth when He came back to normal state after Tapasya and that Place is known as Manikarnika which is now called as Manikarnika Ghat.

Thereafter a beautiful city was built, which was the essence of the lustre and was spread in five kosas and was quite beautiful in which all the amenities could be found. Siva built the city while remaining in the sky in the firmament near the Purusa.

Visnu having been lodged in that city, became desirous of starting creation. He performed tapas sitting in meditation.

Because of his efforts, several streams of water emerged from that place. At that point of time, nothing was visible there.

Then a gem emerging out of his ear fell on the ground, which was turned into a great place of pilgrimage known as Manikarnikā.

The Cosmic Shiva held that city with His trident and placed it on Earth where Jewel fell and this city of five Koshas is called Kashi.

When the said Manikarnikā in the form of water kept on flowing upto five kosas (Pañcakosi), then Siva held it over the tip of his trident.

To get rid of evil karmas and to remove bondage and to grant Moksha, Nirguna Shiva consecrated a Jyotirlinga with amsa of Him known as Avimukta Linga which grants the Moksha.

Thus speaking lord Śiva, grounded Kāši, with the tip of his trident and established it on earth.

Even after the completion of a divine day of Brahmā, the city of Kāšî does not get destroyed. O Sages, at that point of time, Siva holds it over the tip of his trident.

O Brähmanas, then Brahmā again recreates the universe, then he again establishes Kāśī. Because of the bondages of the karmas and their attraction thereto, it is called Kāši.

Nirguna Shiva then ordained Saguna Shiva to never leave this place. From that time, Suguna Vishwanatha Shiva (Shankara or Rudra) always stays at that place with Avimukteswara (formed from amsa of Nirguna Shiva).

And Lord Shiva also grants Moksha in Kashi area for the beings. Kailash Samhita of Shiva Purana in 3.2 states:

Hence he who aspires for salvation and is free from aberration shall understand the Pranava as the cause of all, and Me as the Nirguna Parameshwara. I give this crest-jewel of mantras at Kashi for the liberation of all individual souls.

54
Why is Shiva primarily worshipped in a linga form?
20
Why did Lord Shiva take 44 avatars if his primary role is to be the destroyer?
9
What is the Yogic meaning of getting liberation by reaching Varanasi?
14
How is Mount Kailash, the abode of Lord Shiva, described in Hindu scriptures?
8
What is the story and significance of the Dashashwamedh Ghat?
9
Where in scriptures it is written that those who die in Varanasi will never return to this material world?
9
Why doesn't the holiness of Ganga spread to all the cities on its bank?
7
What is the story of Mallikarjuna Jyotirlinga?
6
What is the story of Rameshwaram Jyotirlinga?
6
What happens to Lord Shiva's trishul during dissolution of universe?
See more linked questions