What is the story of Trayambakeshwara Jyotirlinga? 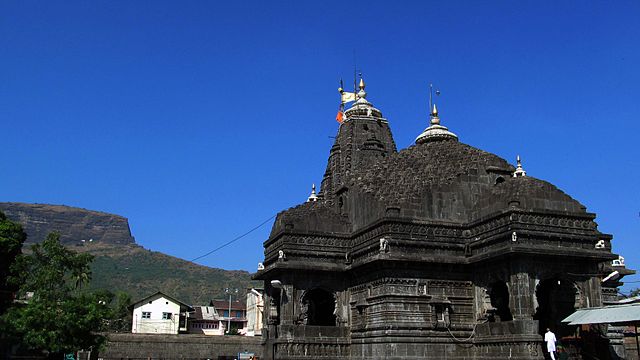 Chapters 24, 25, 26 and 27 of Koti Rudra Samhita of Shiva Mahapurana describes the story of Triyambakeswara Jyotirlinga in detail.

Once the region near Brahmagiri Hills of Sahyadri Mountains (Western Ghats) got inflicted with drought. Gautama Rishi with his wife Ahalya and disciples lived there. For benevolence of region, Gautama Maharshi did hard tapasya of Pranayama for 10,000 years. Varunadeva granted him the boon and asked him to dug a pit and divine water emerged out from pit and region prospered with various crops.

The Sages to retaliate prayed sincerely to Lord Ganesha. Lord Ganesha appeared before them and sages requested Ganesha to send Gautama out of hermitage. Ganesha initially was reluctant but finally obliged saying to sages that they must accept the consequences their action.

Ganesha went to the paddy fields of Gautama disguised as Cow and started grazing those paddy fields. Gautama Muni drove the Cow with straw and Cow died instantly by mere touch and other sages censured him of Go-Hatya.

O excellent sages, staggering and faltering, the cow, because of the boon grazed fields of barley and paddy.

In the meantime, the merciful Gautama also arrived there as a matter of chance. He drove out the cow with the use of Straw.

Those wicked sages ordered Gautama to leave that place. Sage Gautama moved to new place which was at distance of Krosa. Gautama Muni feeling repented requested other sages to prescribe a method to get rid of sin of killing the cow. The sages suggested some methods and asked to choose one method. gautama Muni chose to Worship Parthiva Linga.

Saying that, “As per your command I shall resort to the adoration of Parthiva linga and shall go round the mountain.”

Thus speaking the excellent sage, after going round the mountain, made a Pärthivalinga and adored it.

For his tapasya, Lord Shiva appeared with His Ganas and asked for a boon. Gautama Muni asked to relieve from sin of killing cow. Lord Shiva enlightened him saying that it was conspiracy hatched by wicked Brahmanas.

Śiva said, “O Sage, you are quite graceful, successful, unblemished and sinless. The wicked sages have cheated you, they are sinful, wicked and killers.

Gautama Muni considered wicked Brahmanas plan as boon as he got the opportunity to see Lord Shiva. Lord Shiva asked him another boon and Gautama Muni asked Shiva to give Ganga for benevolence of world.

Then Siva, took out the essence of the heaven and earth, which had been extracted earlier, and was given by Brahmā to Śiva in the marriage of the latter, besides the remaining water of the Gangă, was given away to Gautama by lord Śiva, who is well disposed towards his devotees.

The water of the Gangă, then took to the form of a damsel. The sage Gautama, then eulogising her, bowed in reverence to her.

Gautama said, “You are graceful, blessed and successful. You have purified the earth. O Gangă, you purify me since I am falling in the hell.

Ganga then said to sage that after purifying him, she would go to her abode. Then Shiva ordered Ganga to stay there till end of 28th Kaliyuga of Vaivasra Manvantara.

Then Ganga requested Mahadeva to stay there with His consort and Ganas. Devas eulogized them and said they would visit that place when Jupiter comes to Leo. There Ganga and Shiva stayed there as Gautami (Godavari) and Triyambakeswara.

All the gods said, “When the Jupiter, the most friendly to all, comes to the zodiac of Leo, then all of us will arrive here. There is no doubt about it.

Since that date, at the time of Jupiter’s entry into the zodiac Leo, all the tirthas, kşetras, and the gods visit the place.