In Indian tradition,before a newly constructed house or rented house is occupied Griha pravesham(house warming ceremony) is performed.What are the real significances of this ritual? What is the consequence of not performing this ritual?

Vastu Pooja or Griha pravesha pooja is a common procedure for house warming ceremony in India.

The basic principle lies in the worship and propitiation of various deities of different direction and places of the house.

It also involves worship of Ganesha as a mark of auspiciousness and removal of obstacles along with Nava graha pooja for shanti of planet related doshas.

Vastu mandala pooja is performed along with yogini poojas and many others.

In Hindu cosmology the surface of the earth is represented as a square, the most fundamental of all Hindu forms. The earth is represented as four-cornered in reference to the horizon's relationship with sunrise and sunset, the North and South direction. It is called Chaturbhuji (four cornered) and represented in the form of the Prithvi Mandala. The astrological charts or horoscopes also represent in a square plan the positions of the sun, moon, planets and zodiac constellations with reference to a specific person's place and time of birth. 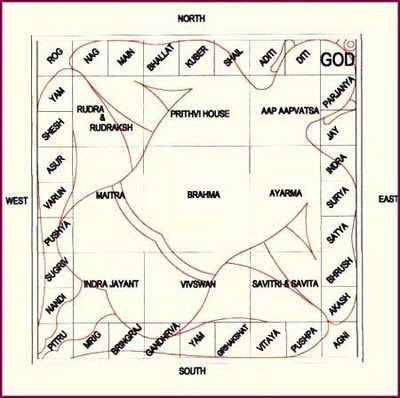 The legend of the Vastu Purusha is related thus. Once a formless being blocked the heaven from the earth and Brahma with many other gods trapped him to the ground. This incident is depicted graphically in the Vastu Purusha Mandala with portions allocated hierarchically to each deity based on their contributions and positions. Brahma occupied the central portion - the Brahmasthana- and other gods were distributed around in a concentric pattern. There are 45 gods in all including 32 outer deities.

Hence it is a pooja of various deities inside and outside the mandala before beginning the official stay in the house/plot. It helps in warding off the negative energies and also for appeasing the deities and planets.

Not the answer you're looking for? Browse other questions tagged belief rituals tradition vastu-shastra .

15
What is the significance of breaking a coconut in Hindu rituals?
9
How do the different Hindu sects complete the line "Sri Bhagavat Agna"?
2
Can rituals like 'Tila tarpana' be performed on "Ratha sapthami" day?
3
Why Satyanarayan Puja is preferred for griha pravesh (house warming ceremony)?
6
What is the consequence of performing deity worship using stale flowers?
4
Marriage tradition of brushing the grooms legs, hands, shoulders and head
4
Are the human sacrifice based practises by "tantrika babas" a part of any tantra system, as popularly shown in the tv shows?