As I discuss in this answer, one of the early movements that was important to the development of Vaishnavism was the ancient Pancharatra movement, whose sacred texts consisted of detailed procedures to worship the sage Narayana, an ancient incarnation of Vishnu. Since the Pancharatra texts originated from Narayana himself, they are followed by pretty much all mainstream Vaishnava Sampradayas, whether Sri Vaishnavas, Madhvas, Gaudiya Vaishnavas, etc. But as I discuss in this question, there's another group of Vishnu-worshippers who worship Vishnu according to an entirely different set of texts, the Vaikhanasas. The Vaikhanasas form a tiny minority, but they run a lot of famous Vishnu temples including the world-renowned Tirumala Venkateshwara temple.

Now compared to mainstream Vaishnavas, Vaikhanasas put less emphasis on Vedantic philosophy and more emphasis on rituals; Vaikhanasa doctrines are more about the construction and worship of idols and the like. But they still do engage in philosophy; the most famous Vaikhanasa philosopher is Srinivasa Dikshitar, a 13th century priest of Tirupati who wrote the Vaikhanasa commentary on the Brahma Sutras as I discuss in my question here. But my question is about another work of Srinivasa Dikshitar, the Dashavidhahetunirupana, which is a commentary on the Sutra texts of the Vaikhanasa Shakha (which I discuss here). In chapter 105 of that work he says this (translation courtesy of @Surya):

In the Srimad Bhagavatam, in the tenth Skandha [there is a quote which says] this: "Lord Krishna begat Upashloka in Trivakra. He was the sincere disciple of Devarshi Narada and learnt from him the Satvata Tantra which gives Moksha to its knower. The Satvata Tantra narrates the Vaishnava Samskaras for women, Shudras and Dasas."

This quote interests me for two reasons. First of all, it alludes to the story of Krishna having a child named Upashloka with the hunchback Kubja, AKA Trivakra or Sairandhri, immediately after killing Kamsa. As discussed in this question, this is a story mentioned in the Narayaneeyam, a poem summarizing the Srimad Bhagavatam, but it doesn't seem to be mentioned in the Srimad Bhagavatam itself.

Second of all, it relates to an important Vaikhanasa belief. The Pancharatra Agamas, referred to as Satvata Tantra here, prescribe an initiation ritual called Pancha Samskara, which among other things involves the branding of one's shoulders with the Shankha and Chakra symbols as you can see in this video. But as I discuss in this question, Vaikhanasa Brahmins consider themselves to be "Garbha Vaishnavas", i.e. they believe the Vishnu comes and initiates them in the womb into Vaikhanasa. So as described in page 130 of this book, Vaikhanasas believe that only low-caste people and women should do the branding ritual, and Srinivasa Dikshitar cites the putative Bhagavatam quote above to justify this belief. Now as a Sri Vaishnava, I think Brahmanas should also perform the Pancharatra initiation ritual, and I think that quote is just saying that the ritual can also be done by low-caste people and women. But regardless I'm interested in finding the quote.

So my question is, where in the 10th Skandha of the Srimad Bhagavatam is the quote given by Srinivasa Dikshitar? Here is the ISKCON translation of the 10th Skanda by A.C. Bhaktivedanta Prabhupada; the quote doesn't seem to be there.

But is it possible that there are multiple recensions of the Srimas Bhagavatam, and that the quote is simply not present in the particular manuscript used in the ISKCON translation?

Srimad Bhagavatam is one of the most widely recognised Puranas among the 18 Puranas, for its one-pointed focus on Bhakti. Thus it has been commented upon by many scholars from various schools of Vedanta, like:

(Note: Out of these commentaries, the one that deviates the most from the extent version of Srimad Bhagavatam is the commentary of Vijayadhvaja Tirtha, whose version of the text contains an excess of slokas (and many chapters as well, in the Dasama Skandha).)

In Viraraghavacharya's version of the text, we find the verse quoted in the question:

"Trivakra's son Upasloka was exclusively devoted to Krsna. He was a direct disciple of Narada. He adopted the vow of life long celibacy. the Sattvata Tantra was composed by him. It laid down the Vaishnava purificatory rites for women, Sudras and slaves. By studying the Tantra, one attains liberation from Samsara."

These verses appear (in his version) in the 90th chapter (last chapter) of the Tenth Canto, between verses 34 and 35 of the common version of Bhagavatam. 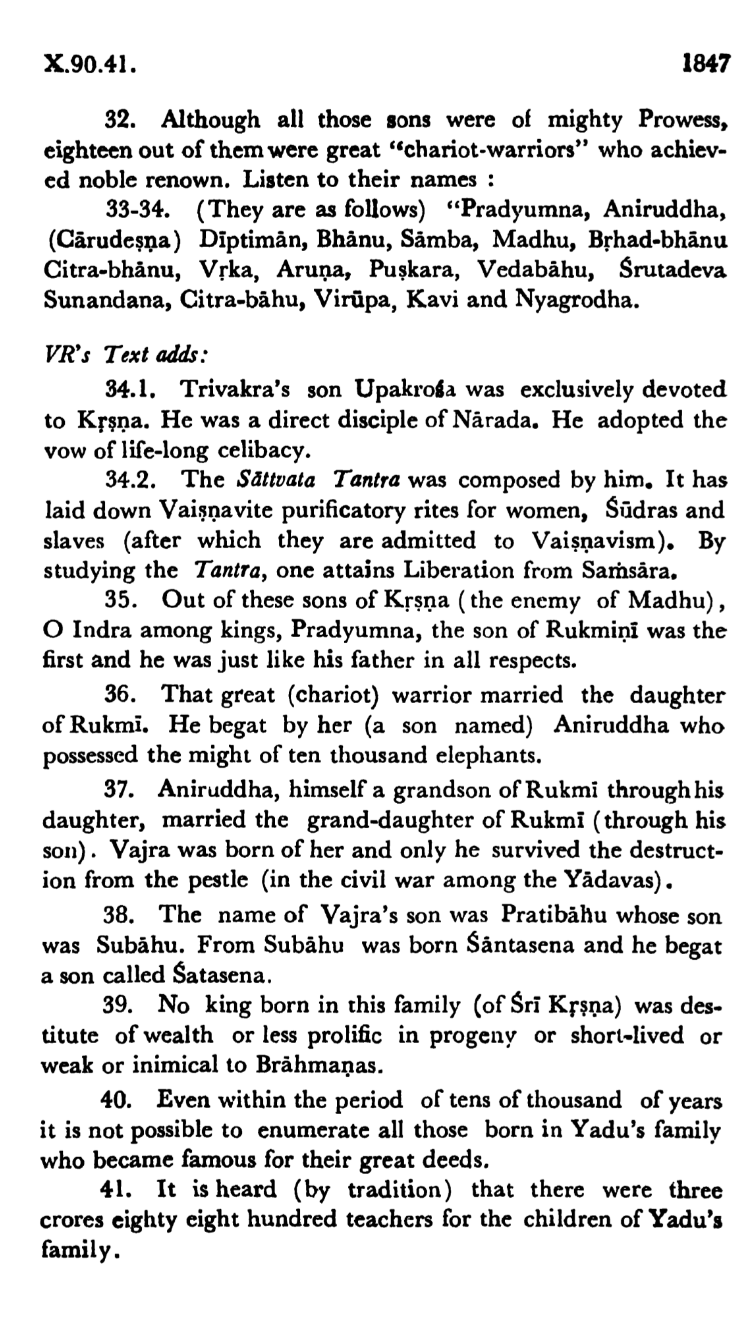 Considering that this was sung about by poets from Kerala in their summaries of the Bhagavatam, we can infer that it must occur in the Southern Recension of the Bhagavatam, which must have been the dominant version in Tamilnadu and Kerala until the advent of Chaitanya Mahaprabhu(?).

The translation of Srimad Bhagavatam including all additional verses and important commentaries of the Acharyas can be downloaded from this website.

Not the answer you're looking for? Browse other questions tagged krishna bhagavata-purana vaishnavism vaikhanasa .

20
How has Lord Vishnu's understanding developed and what was his role initially?
10
Do any non-Vaishnava Agamas trace their origins to a Vedic Shakha?
2
What is the story of Upashloka?
4
What is the story of Vikhanasa, founder of the Vaikhanasa school?
6
Is the Vaikhanasa commentary on the Brahma Sutras available in English?
6
Are there any low-caste Vaikhanasa priests?
4
Is it true that Madhvācārīs used to emboss their bodies with hot iron blocks?
3
Is it true that a person can only become Vaikhanasa by birth and not by Samskara?

4
What is the story of Vikhanasa, founder of the Vaikhanasa school?