Was Parsvanatha, the 23rd tirthankara of Jainism, an avatar of Lord Shiva?

Parsvanatha was the 23rd tirthankara of Jainism. He was very popular and belonged to Ikshvaku dynasty like other tirthankaras.

He has a lot of temples across India, the most popular of which is at Shikhar Ji, also known as Parsvnatha hills where it is believed he got Moksha. There is another temple that belongs to him which is present in Nakoda, Rajasthan known as Nakoda Parsvnath. It is extremely popular Jain temple but the most popular deity there is not Parsvnath but Bhairav! Because the area is Nakoda, he is known by the name of Nakoda Bhairav. 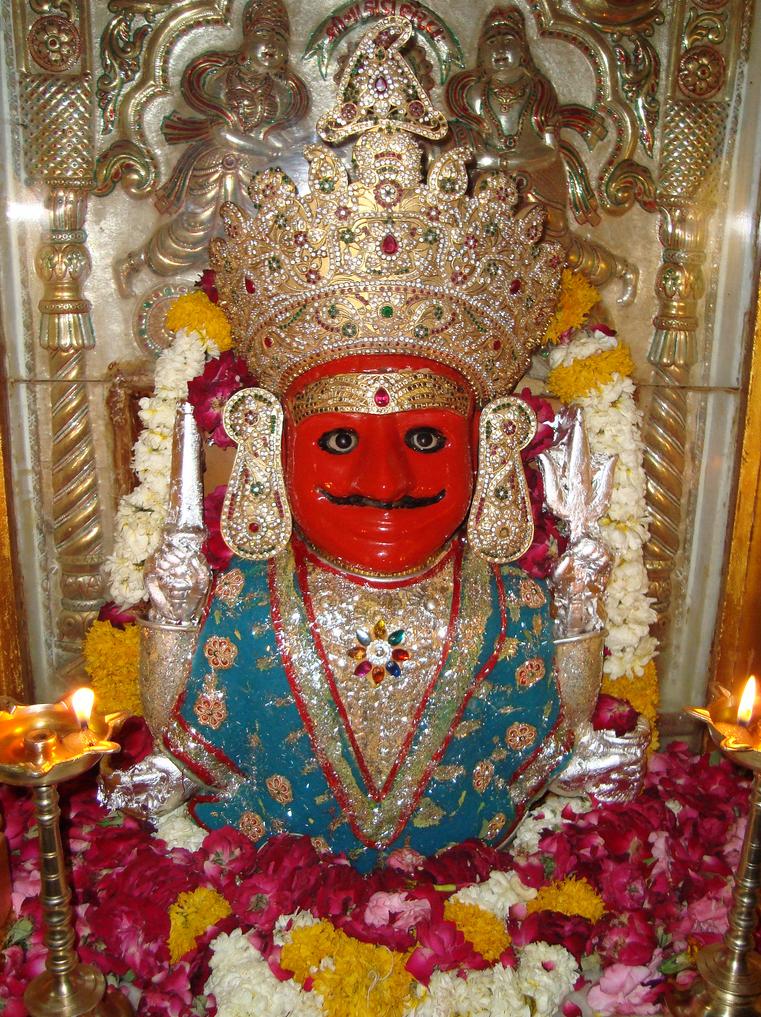 In his lower left hand is the Damaru and in upper left hand is Trishula so he is the same Bhairava which can be found in many Shiva temples. The story of the origin of this idol in Nakoda goes like this:

There are stories of Jain statues that were hidden underground to protect them from attacks by intolerant rulers and chieftains during the first half of the second millennium. Many such statues were forgotten and some are still dug out today. The statue of Pārśvanātha or Lord Pārśva in Nākoḍā – Nākoḍā Pārśvanātha – was rediscovered in this way in 1455. According to the story, a Jain lay man had a dream in which Nākoḍā Bhairava told him of the long-forgotten statue of Pārśvanātha or Lord Pārśva, the 23rd Jina, and where it was hidden. The statue was then discovered and installed in the Nākoḍā temple by the Kharatara-gaccha monk Kīrtiratna-sūri. As Kīrtiratna-sūri was carrying the rediscovered statue of Pārśva, people spontaneously formed a procession behind him. They saw Nākoḍā Bhairava in the form of a boy dancing and walking with them, eventually causing them to stop in Nākoḍā. Kīrtiratna-sūri decided to keep the Pārśvanātha statue there and installed the aniconic image – piṇḍākar – of Nākoḍā Bhairava by the temple entrance.

According to the story, Bhairava was extremely happy to see the Parsvnath idol which is pretty odd because Bhairava has nothing to do with Jainism. So there has to be something special in Parsvanatha that made Bhairava very happy. I think Parsvanatha might be an avatar of Shiva. Interestingly enough, Parsvanatha was born in Kashi, the city of Shiva.

Another unique aspect of Parsvanatha is that he is associated with snake. When I read snake and Shiva, it only reminds me of Vasuki so could that mean Parsvanatha was avatar of Vasuki?

Parsvanatha was an avatar of Rudra.

Guru Gobind Singh wrote a composition - Parasnath Avatar which is present inside Rudra Avatar which itself can be found in Dasam Granth.

Dasam Granth contains a lot of topics that cover the 24 avatars of Vishnu, 7 avatars of Brahma and includes 2 avatars of Rudra - Dattatreya and Parsvanatha.

Lord Parshvanath is the 23rd Tirthankara of the present chobisi(चौबीसी ).

Sri Parshvanath was born in Kashi (Varanasi, now) on posh krishna ekadashi (पौष कृष्णा एकादशी). His father was king AsvaSen(अश्वसेन) and mother was queen Vamadevi(वामादेवी). His birth was celebrated not only by the town people but Indra and Narendra from heaven.

Prince Parshvanath was impressive and extraordinarily intelligent since childhood. Although he had every kind of glory, yet he was not slightly attracted to them. His parents urged him to marry but he decided to remain celibate throughout his life.

The incident that caused his detachment from the world(वैराग्य प्रसंग): 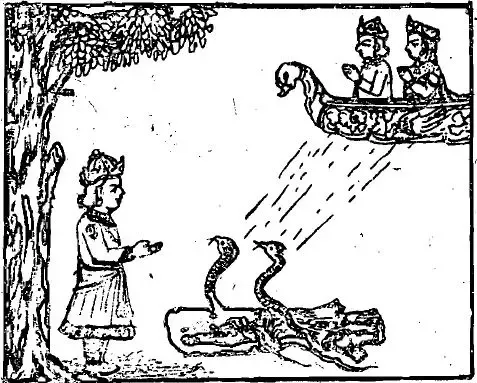 Once he was travelling with his friends. In the path, he saw his grandfather doing Panchagni tap(पंचाग्नि तप). A pair of snakes was also burning in the lighted woods. Parshvanath detected this with his AvadhiGyan(अवधिज्ञान) and denied him to burn the woods. But no one believed him until they broke the wood into pieces and saw half burned snakes.

Parshvanath addressed their karmic agony with the all auspicious "Namokar Mahamantra" and they became Dharnendra-Padmavati(धरणेन्द्र -पद्मावती) in heaven because of dying with low Kashaya(मंद कषाय). This heart-rending incident made Parshvanath detach from the world. He took Diksha and became a saint on Posh Krishna Ekadashi(पौष कृष्णा एकादशी).

Once he was meditating in the Ahi area(अहि क्षेत्र). His previous birth enemy named Samvar Dev(संवर देव) was passing from the above. On seeing saint Parshwanath, he remembered his previous enmity and started troubling him by showering heavy rains, hailstones, stones and thunderstorms. But Parshvanath continued his soul-practice. During this, Dharnendra-Padmavati(snakes in the woods above) took the form of a large snake and tried to protect saint Parshwanath. Thats why some idols of Lord Parshvanath have serpants on the head. However, Parshvanath was already been safe by his own soul-practice.

Parshvanath attained supreme knowledge(केवलज्ञान ) on Chaitra Krishna Ekadashi(चैत्र कृष्णा एकादशी ). After attaining Kevalgyan, the Samvar Dev apologised for his deeds. Lord Parshvanath along with his samosaran(समवसरण ) moved in the entire Bharat for 70 years and gave his preachings in the form of Divyadhwani(दिव्यध्वनि ). 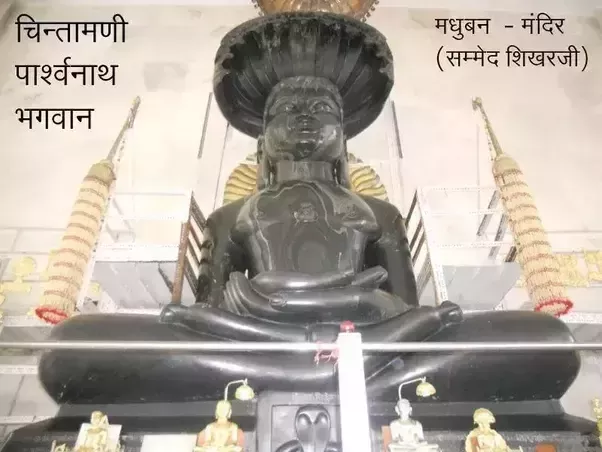 P.S.: This is a brief of parshvanath's story taken from Vitrag Vigyan Pathmala-2. To read full story of parshvanath, please refer to chobis tirthankar mahapuran.

Is he Lord Shiva?

Jainism believes lord Shiva as that state of Samadhi which is the highest level of happiness a jiva can achieve-- Shivsukh is the highest ever happiness that can be achieved and what jain monks call it Kaivalya/ kaialya gyaan.

So yes, Sri Parasnath Bhagwaan attained kaivalya moksha, and attained the divine Shiva Sukh through complete "Karma-kshay"(voiding off karma gatis by penance), being Arihant he has the power to bestow the same Sukh whoever believes in him, until he becomes a Siddha at the end of this kalpa period But Jainism strictly informs the truth about that a soul needs to shed of all the karmas through penance to attain salvation.

Since, Tirthankaras are free from worldly affairs, so they never grant a wish when happy neither curse when not happy from a devotee i.e. is they are fee from worldly affairs unlike the gods. But there are fixed highly devoted disciples/worshippers or the ruling deities (known as Adhisthayak dev) of tirthankaras, who in turn fulfills the desires of the devotees and always guards the Tirth as well. Surprisingly, we can find all the deities associated with God Shiva as Parshvanath's yaksha(protecting deities who guards the tirth, it's followers from bad happenings, fulfills wishes). 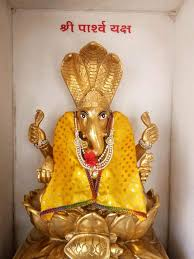 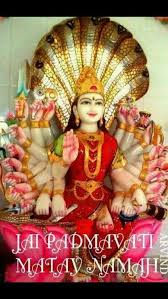 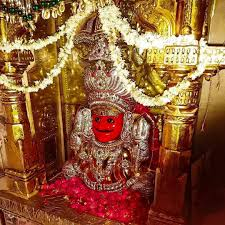 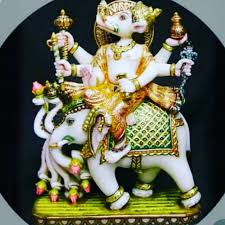 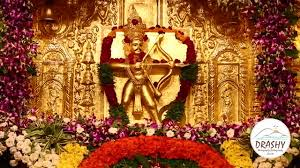 etc. and also, there are 108 Parshvanathji all having different number of snakes associated.

Also, Sri Parshavanath is most worshipped Tirthankar as mostly all Shvetambar Jain temples has the idol of Sri Parshvanath, Bhairavdevji.

The current place was known as Veerampur in old days. Two brothers, namely Veersen and Nakorsen, had established two cities at a difference of 20 miles and named them as Veerampur and Nakornagar respectively. Veersen established the temple of Shri Chandraprabh Bhagwan while Nakorsen of Shri Suparshwanath Bhagwan in their cities. The establishment (Pratishtha) of the temples was performed by Arya Shri Sthulibhadra Swamiji at both places. King Samprati pratibodhak Acharya Shri Suhasti Surishwarji, Acharya Shri Siddhsen Divakar - the Ratna in kings court of King Vikramaditya, writer of Bhaktamar Strotra Acharya Shri Mantung Surishwarji, Shri Kalakacharya, Shri Haribhadra Suriji, Shri Dev Suriji and many other scholar Acharyas has initiated the then kings with their efforts from spiritual speeches to perform the renovation works at these temples. Nakornagar existed up to 13th century. Later on people migrated to other nearby place at the time of attacks by Alam Shah. He destroyed the temple but the priests of the temple took measures to safeguard the idols of the temple and shifted them to Kalidrah village situated at a distance of 4 miles from the temple. During 909, 2700 Jain followers settled in the Veerampur city. One among them, Shri Harakhchandji renovated the old temple and established Shri Mahaveer Bhagwan idol as the Moolnayak. Descriptions of renovation work done in 1223 also exist. Alam Shah also attacked Veerampur and damaged heavily the temple in 1280. It was the beginning era of 15th century that the renovation works to rehabilitate the damaged temple started. The idols of Nakornagar, kept at Kalidrah village were brought here and the idol of Shri Parshwanath Bhagwan was chosen & established in the temple as the Moolnayak of it in 1429. As the Moolnayak idol belonged to Nakornagar, this teerth was called as the Nakoda teerth.

As per the passtime, Acharyaji got in-dream divine Darshan of Sri Bhairavdev who instructed to recover the Moolnayak idol from a pond situated next to Sinadari village near Nakornagar, which later on was brought & established as the Moolnayak idol in Nakodaji temple in 1429 by Bhattarak Acharya Shri Uday Surishwarji. And from this day onwards this teerth place became famous as Nakoda teerth. Sri Bhairavji ON REQUEST from Acharyaji agreed wearing Janeyu,accepting Sukhdi,Srifal prasad instead of tamasic,rajasic things and to protect Tirth as he's the Adhistayak Istadev of followers. Acharyaji also placed Hanumanji as a mark of victory of righteousness over evil. The miraculous deity of this place, Shree Bhairavji Maharaj was ceremoniously installed here in samvat 1511 by Acharya Kirtiratna Suri. This pilgrimage continuously prospered after the installation of Nakoda Bhairav. Once a mad king tried attacking the temple, but due to Sri Bhairavdev's might the king,army went home badly injured by the big honeybees who stung tortured them. The miracles of this place found abode in the minds of the people. The devotees poured in from various places of the country and abroad. From time to time the pilgrimage has been restored and salvaged too, then renovated again.

Till the seventeenth century, Jains were in majority in this pilgrimage, but later on, the residents of this place went to other villages and towns nearby and settled there. Today irrspective of caste, people throng to view the beautiful deities of Tirthankars, Sri Batuk Bhairavdev and Kala Bhairavdev,etc especially on all auspicious days. 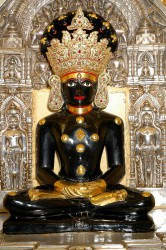 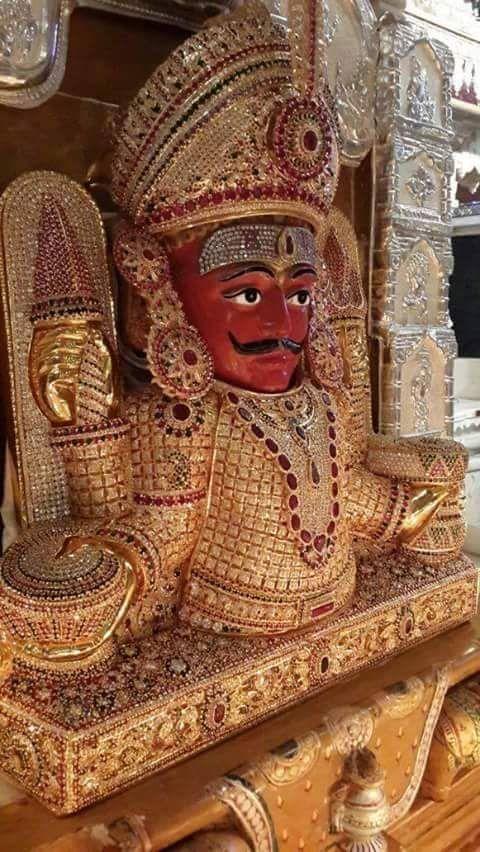 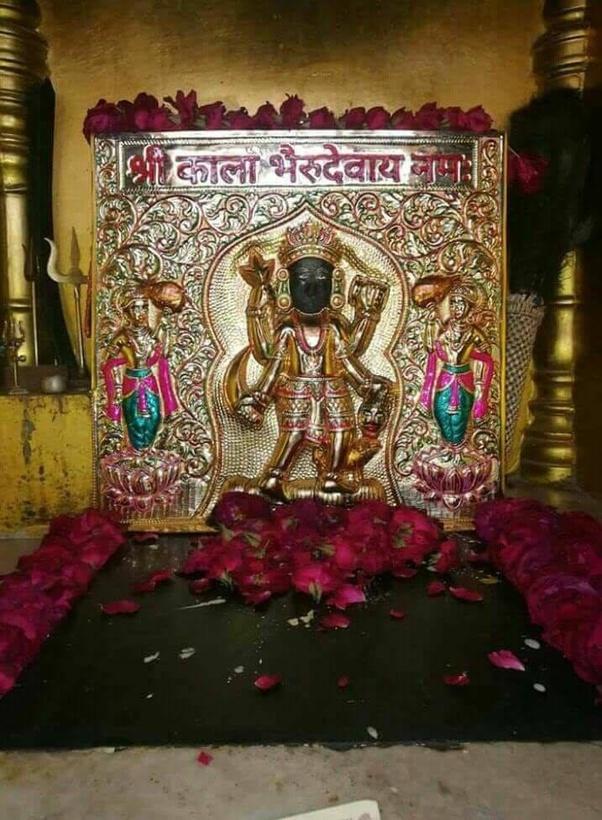 Note: people might think the path prescribed by Parshvanath Bhagwan seems impossible to practice-- it is so and the benefits too are incomparable. Srimad BHAGWAD GITA- completely in Chapter 6 DHYANA YOGA God Krishna too guides Arjuna about this successful path-- lastly Arjuna after hearing and knowing the truth speaks the following verse-

SBG 6.33: Arjun said: The system of Yog that you have described, O Madhusudan, appears impractical and unattainable to me, due to the restless mind.

So, it's a one way journey, the one who attained kaivalya by penance, will for sure won't have to re-birth.

Not the answer you're looking for? Browse other questions tagged shiva avatars other-religions .

2
Is Hinduism related to Jainism?

29
Who is Govindaraja and how is he related to Venkateshwara?
11
Was Rishabha, the first tirthankar of Jainism, an incarnation of Lord Vishnu or Lord Shiva?
10
Do any scriptures apart fom Sabarimala Sthala Purana foretell the birth of Ayyappa?
5
How was Goddess Manasa born?
5
Which Purana mentions about Sati's death?
5
Where is it mentioned about sister of Lord Shiva in religious texts?
4
Where is it written that Ramakrishna Paramahamsa was an incarnation of Lord Vishnu?
4
Which Purana talks about the incident of Lord Shiva saving The Sage Markandeya?