Why Durva grass is dear to Lord Ganesha

Why is Durva grass offered to Lord Ganesha ? What is the significance of praying Ganesha with durva grass ?Can any other flower or leaves used as a substitute for this. 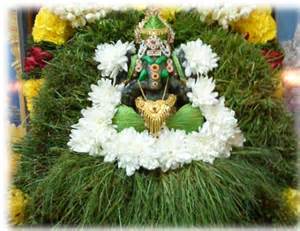 The legend Of Analasura and Shree Ganesh -:

The Story Of Durva -: Once a demon named Analasura caused trouble in the heavens. He emitted fire from his eyes and destroyed whatever came in his way. The Gods frightened and asked Lord Ganesha’s help . Shree Ganesha assured them that He will finish off the demon and restore peace. In the faught with , Analasura attacking Lord Ganesha with fire Him. At that time Lord Ganesha, took the giant form and swallowed the demon . After this , Lord Ganesha felt extremely uneasy due to the heat inside His body. So, the moon came to His help and stood on Ganesha’s head. Thus, He was named ‘Bhaalachandra’ (भालचंद्र). Lord Vishnu gave His lotus to bring down the heat, Lord Shiva tied His cobra around Ganesha’s belly. But nothing could cure the heat. Finally, a few sages came with 21 durvas and placed it on Ganesha’s head. Miraculously, the heat went off. And thus Durva grass became dear to Shree Ganesha .So Lord Ganesha declared that whoever worships Him with durva grass will forever receive His blessings.

Sri Ganesh is easily pleased. Just by offering Him a little durva grass. (21 blades). According to Ayurveda Durva grass also has some medicinal properties.

Not the answer you're looking for? Browse other questions tagged rituals ganesha puja .

3
Why is Durva grass offered to Lord Ganesha?

21
Why does Lord Ganesha have an elephant head?
10
Why we do not keep Tulsi on Prasada offered to lord Ganpati?
10
Why did Vyasa seek the help of Lord Ganesha?
4
Who propounded the method of doing Puja using akshatas?
5
Did Lord Vishnu pray to Lord Ganesha? If yes, in which scripture is it written?
7
Which scriptures portray Lord Ganesha to be the supreme God?
6
About UcchistaGanapathi and why its regarded as highest Ganesha form