How many human births does the soul take before it merges with the Almighty?

The soul passes through a cycle of successive lives (samsara) and its next incarnation i.e., birth is always dependent on how the previous life was lived (karma). Finally, the soul travels back to Godhead. In this process, how many human births does the soul take? Is the number fixed or changes from person to person based on their karma? 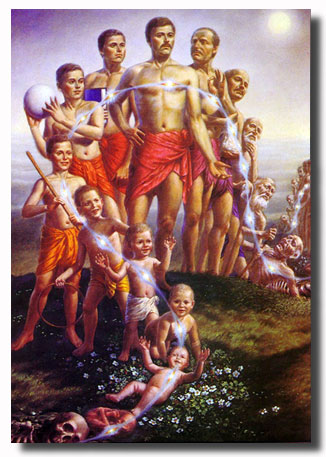 Although this may not give us the exact number of human births but this is the closest information I could get about this topic:

The duration of time that a Jiva spends in the human form is aluded to in SECTION CCLXXX of the Shanti Parva of Mahabharat when Sanat Kumar, one of the mind-born sons of Lord Brahma lectures Vritra.

The stages of existence, O Daitya, through which Jiva must pass are not unlimited. They are FOURTEEN HUNDREDS OF THOUSANDS in number. In consequence of them Jiva ascends, stays, and falls down as the case may be. 4 The end that is attained by a Jiva of dark flue is very low, for he becomes addicted to acts that lead to hell and then has to rot in hell. 5 The learned say that in consequence of his wickedness, the continuance (in such form) of a Jiva is measured by many thousands of Kalpas.

1 Having passed many hundred thousands of years in that condition, Jiva then attains to the colour called Tawny (and becomes born as an intermediate creature). In that condition he dwells (for many long years), in perfect helplessness. At last when his sins are exhausted (in consequence of his having endured all the misery they are capable of bringing), his mind, casting off all attachments, cherishes Renunciation. 2 When Jiva becomes endued with the quality of Sattwa, he then dispels everything connected with Tamas by the aid of his intelligence, and exerts (for achieving what is for his good). As the result of this, Jiva attains to the colour called Red.

If the quality of Sattwa, however, be not gained, Jiva then travels in a round of rebirths in the world of inert, having attained to the colour called Blue. 3 Having attained to that end (viz., Humanity) and having been afflicted for the duration of ONE CREATION by the bonds born of his own acts, Jiva then attains to the colours called Yellow (or becomes a Deity). Existing in that condition for the space of a hundred creations, he then leaves it (for becoming a human being) to return to it once more. 4 Having attained to the Yellow colour, Jiva exists for thousands of Kalpas, sporting as a Deva.

Without, however, being emancipated (even then), he has to stay in hell, enjoying or enduring the fruits of his acts of past Kalpas and wandering through nine and ten thousand courses. 5 Know that Jiva becomes freed from the hell (of acts) as represented by heaven or godship. After the same manner, Jiva gets, off from the other births (corresponding with the other colours). Jiva sports for many long Kalpas in the world of Devas. Falling thence, he once more obtains the status of Humanity. He then stays in that condition for the space of a HUNDRED AND EIGHT KALPAS. He then attains once more to the status of a Deva. If while in the status of humanity (for the second time) he falleth through (evil acts as represented by) Kala (in the form of Kali), he then sinks into the Dark colour and thus occupies the very lowest of all stages of existence.

As regards that Yogin who is unable to abandon the felicities that Yoga-puissance brings about, he has to dwell (in one and the same body) for one century of Kalpas in auspiciousness and after that in four other regions (called Mahar, Jana, Tapas, and Satya). Even that is the highest end of one belonging to the sixth colour, and who is Unsuccessful though crowned with success, and who has transcended all attachments and passions.

1 That Yogin, again, who falls off from Yoga practices after having attained the measure of eminence described already resides in heaven for a century of Kalpas with the, unexhausted remnant of his past acts (to be exhausted by enjoyment or endurance as the case may be), and with the seven (viz., the five senses of knowledge and mind and understanding) purged of all stains in consequence of their predisposition or proneness towards the attribute of Sattwa. And the expiry of that period, such a person has to come to the world of men where he attains to great eminence. 2 Turning back from the world of men, he departs for attaining to new forms of existence that run higher and higher in the upward scale. While engaged in this, he courseth through seven regions for seven times, his puissance being always increased in consequence of his Samadhi and the re-awakening from it. 3 The Yogin who is desirous of final Emancipation suppresses by Yoga-knowledge the seven, and continues to dwell in the world of life, freed from attachments; and taking those seven for certain means of grief, he casts them off and attains afterwards to that state which is Indestructible and Infinite.

I know this is not the exact number of births but it does give a fair idea of the process that you have asked in the question - It depends on the merit/demerit earned through our Karma how many times we come back to this human form and how much time we spend in it.

Not the answer you're looking for? Browse other questions tagged karma moksha atma rebirth sin .

9
Unlimited reincarnations before moksha or only 7?

7
Does Karma (going from a higher life-form to a lower one) only apply to humans?
8
Is every Jeeva "eternal" like the ultimate God (nirguna Brahman) or "temporary" within cycle?
6
If soul gets rebirth into another body, will pinda pradanam and shraddha rituals reach that soul?
8
How many rebirths does a soul go through?
4
What is the purpose of sending a soul to Svarga or Narka?
2
How does one know that how many births he/she is yet to take? And is his/her present level of conciousness?
5
Critics on Karma