Is Hinduism brought by Aryans or Dravidians to India?

What is the origin of Hinduism? Is Hinduism brought by Aryans or Dravidians? Besides this there is a saying that North Indians are Aryans and South Indians are Dravidians. As per Saivism, Dravidians are dark complexioned worshipped Lord Shiva and Aryans are white complexion well built and worshipped nature. If it is so Lord Narayna has so many divyadesas in south compared to North. Any scriptures supporting this?

Hinduism is eternal as it has no Aadi and No Anant. It is a set of governing principals of universe. So it is simple a philosophy of everything.

Is Hinduism brought by Aryans or Dravidians? Philosophy is experienced or felt, just like we feel gravity, just like feel sun light. Who brought gravity and light? None, right? So everyone is a part of this philosophy inlcluding every living and non living beings.

Besides this there is a saying that north Indians are Aryans and south Indians are dravidians. Aryans are noble people of any society. So, thus by hard work, intelligence and ability to "Shashtartha" one used to become noble or aryan.

Dravid shabda means "covered from three sides with sea water". So, this is the reason southern India is dravid, but if we consider its definition, then gujrat is also dravid, since it is also covered from 3 sides. Kindly have a look at the map.

As per Saivism, dravidians are dak complexioned worshipped Lord shiva and Aryans are white complexion well built and worshipped nature.

Philosophy has no connection with anyone's color, physique.It is a mental exercise. I am also dark skinned, and I am a north Indian. Krishna was also dark in color.

If it is so Lord Narayna has so many divyadesas in south compared to north. Any scriptures supporting this?

It is not true. We love Ram as a king and We love Krishna. They were also rulers. We also feel as emotions about Ram as you guys do. Why are you just separating us from you? We are you and you are we.

We all love you for your culture saving preservation.

Bharat or Bharatha has a sanskrit verb "Bha" and which is the root verb for other words like Anuvibha, prabha, prabhat and they are connected to light.

You know what Bharat means. It means The light of Param Aatma. And we must all be happy that we share such a great civilization togetherness.

Read below image, how Bha verb has a meaning. Based on upsarg and pratyay, you get a meaning 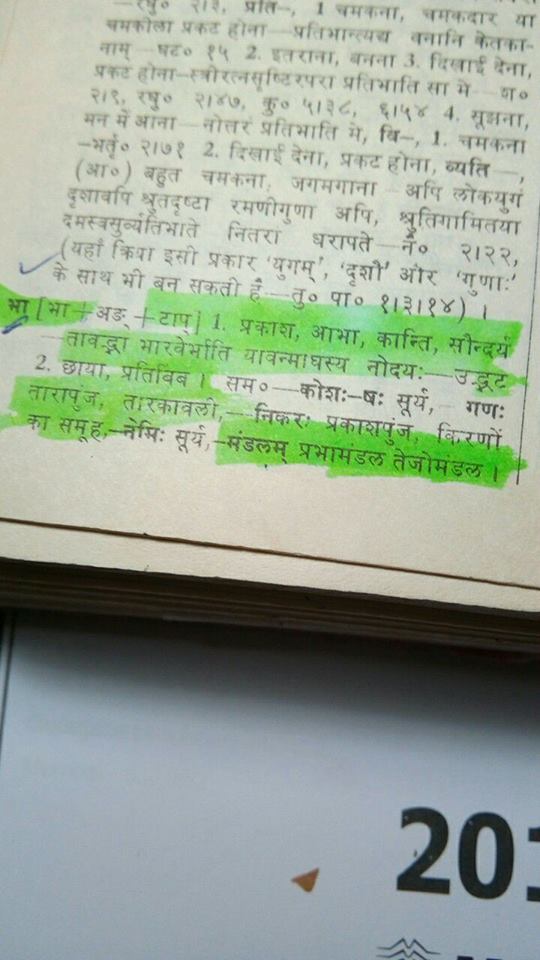 Bha here means Light or reflection or light spectrum (rainbdow). But when we refer this word spiritually, this light does not mean actual sun light, but the parmatmaya: prakasham. The other part 'rata' means devoted to something.

Now coming back to bharat, a land where people are seekers and seers of knowledge with devotion.When knowledge of person increases, we often say person's aura (tej) has increased. And all people do this, the land becomes a place of Aura yet another symbol of light.

Bharat== where all people are devoted to knowledge or paramatma's light. Bharat= Land of Prakash (of Paramatma or of paramatma's knowledge).

I would like to add a few points to@Yogesh Sanchihar's excellent answer.

No one has ever discovered or brought Hinduism anywhere as it is a timeless philosophy to be realized by and to uplift the individual. The Aryan-Dravidian divide is also largely political and/or fictious. Therefore, the questions raised by you do not arise.

Not the answer you're looking for? Browse other questions tagged scripture history .

7
Why hinduism did not get propagated to entire world?

8
Were Aryans the forefathers of Hindus?
6
Fulfilled prophecies in Hinduism?
5
When did Hinduism spread to south India?
13
Is Mahishasura Mardini Lakshmi or Durga?
3
How castes were produced in India?