What is the legend of the Bāhudā river?

How did the Bāhudā river near Kanipakam, Andhra Pradesh, India get its name? Is there a story behind it? Is the river mentioned in any of the scriptures? 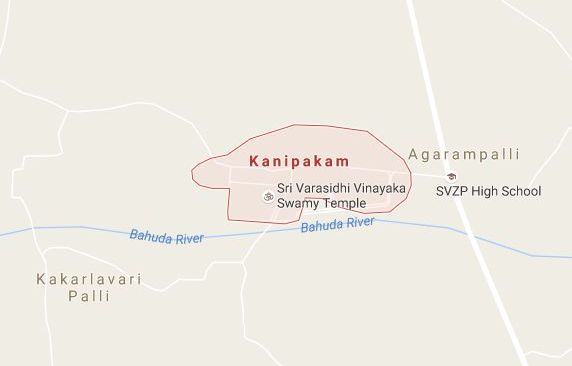 The legend behind Bahuda River

Long ago there lived two brothers Sankha and Likhita. They were on a pilgrimage to Kanipakam. As the journey was tiring, the younger brother Likhita felt hungry. Disregarding the advice of the elder brother he plucked a mango from the mango grove. Sankha felt bad and reported this to the ruler of that area and pleaded for punishment for the sin committed during the pilgrimage. Thus Likhita was punished severely being deprived of both arms.

Later they took bath in the river near Kanipakam temple. Lo Behold! The chopped arms were restored to Likhita as soon as he had a dip in the sacred waters of the river. These incidents lead the ruler to rename the river as 'Bahuda' (Bahu means human arm).

Thus the river beside Kanipakam temple is now known as 'Bahuda River'.

Longer version of the story from Mahābhārata, Śānti-parva, Ch. 23 is below.

Yudhishthira said, 'O holy one, by what acts did Sudyumna, that lord of the earth, obtain the highest success? I desire to hear the history of that king!'

"Vyasa said, 'In this connection is cited this old history. There were two brothers, viz., Sankha and Likhita, of rigid vows. The two brothers had two separate dwellings both of which were beautiful. Situate by the bank of the stream called Vahuda [Bāhudā], both of those residences were adorned with trees that were always burthened with flowers and fruits.

Once on a time Likhita came to the residence of his brother Sankha. At that time, however, Sankha had gone out of his asylum on no fixed purpose. Arrived at the asylum of his brother, Likhita plucked many ripe fruits. Obtaining them the regenerate Likhita began to eat them without any qualms of conscience. While still employed in the act of eating, Sankha came back to his retreat. Beholding him eating, Sankha addressed his brother, saying, 'Whence have these fruits been obtained and for what reason art thou eating them?' Approaching his elder brother and saluting him, Likhita smilingly replied, saying, 'I have taken them even from this retreat.' Filled with great rage, Sankha said unto him, 'Thou hast committed theft by thyself taking these fruits. Go and approaching the king confess to him what thou hast done. Tell him, O best of kings, I have committed the offence of approaching what was not given to me. Knowing me for a thief and observing the duty of thy order, do thou soon inflict upon me, O ruler of men, the punishment of a thief.'

Thus addressed, the highly blessed Likhita of rigid vows, at the command of his brother, proceeded to king Sudyumna. Hearing from his gate-keepers that Likhita had come, king Sudyumna, with his counsellors, advanced (for receiving the sage). Meeting him, the king addressed that foremost of all persons conversant with duties, saying, 'Tell me, O revered one, the reason of thy coming. Regard it as already accomplished.' Thus questioned, that regenerate sage said unto Sudyumna, 'Do thou promise first that thou wilt achieve it. It will then behove thee, after hearing me, to accomplish that promise. O bull among men, I ate some fruits that had not been given me by my elder brother. Do thou, O monarch, punish me for it without delay.' Sudyumna answered, 'If the king be regarded as competent to wield the rod of chastisement, he should be regarded, O bull among Brahmanas, as equally competent to pardon. Purified in respect of thy act, O thou of high vows, consider thyself as pardoned. Tell me now what other wishes thou hast. I shall certainly accomplish those commands of thine!'

"Vyasa continued, 'Thus honoured by the high-souled king, the regenerate sage Likhita, however, did not solicit him for any other favour. Then that ruler of the earth caused the two hands of the high-souled Likhita to be cut off, whereupon the latter, bearing the punishment, went away.

Returning to his brother Sankha, Likhita, in great affection, said, 'It behoveth thee now to pardon this wretch that hath been duly punished (for what he did).'

Sankha said, I am not angry with thee, nor hast thou injured me, O foremost of all persons conversant with duties. Thy virtue, however, had suffered a shock. I have rescued thee from that plight. Proceed without delay to the river Vahuda and gratify duly, with oblations of water, the gods, Rishis and the Pitris, and never again set thy heart on sin.'

Hearing these words of Sankha, Likhita performed his ablutions in the sacred stream and set about for commencing the water-rite. Upon this, two hands, resembling two lotuses, appeared at the extremities of his stumps. Filled with wonder he came back to his brother and showed him the two hands.

Sankha said unto him, 'All this has been accomplished by me through my penances. Do not be surprised at it. Providence hath been the instrument here.' Likhita answered, 'O thou of great splendour, why didst thou not purify me at first, when, O best of regenerate ones, such was the energy of thy penances?' Sankha, said, 'I should not have acted otherwise. I am not thy chastiser. The ruler (who has punished thee) has been himself purified, as also thyself, along with the Pitris!'

Through this story Vyasa is reminding Yudhishtira the principal duties of Kshatriyas.

"Vyasa continued, 'That king, O eldest son of Pandu, became eminent by this act and obtained the highest success like the lord Daksha himself! Even this is the duty of Kshatriyas, viz., the ruling of subjects. Any other, O monarch, would be regarded as a wrong path for them. Do not give way to grief. O best of all persons conversant with duty, listen to the beneficial words of this thy brother. Wielding the rod of chastisement, O king, is the duty of kings and not the shaving of the head.'"

Not the answer you're looking for? Browse other questions tagged mahabharata dharma india rivers .

5
Who is the Rishi who cut off his own hands for stealing?

8
Why is India also called Bharata?
24
Where is the Saraswati river according to Hindu scriptures?
5
When did Hinduism spread to south India?
2
What is the story Of River Narmada from Puranas and significance of Narmada Parikrama?
1
Geography of Malini river
4
Why did Muni Jahnu drank entire water of holy river Ganga?
9
Story of river Samanga which cured Ashtavakra