Can i offer worship/prayers in Shiva or Shakti temples after having meat and without bathing?

Suppose, i am going to Assam's kamakhya temple (shakti peeth with lot of killing of animals for offering to devi), then can i eat meat and wash hands properly and then without taking bath, can i enter temple/pray devi in valid sense of shakt scriptures. In bengal and assam, i have seen people largely not following any such restrictions.

whether that same i applicable in case of shaiva temple? hanuman temple(as he was reincarnation of shiva)?

First of all,which meat are you talking about?

Was it offered to you from the temple itself as prasadam?If so,then by consuming it you will become pure as opposed to impure.

If not,then please read on the next few lines:

It is clearly stated in our Shastras that without proper Suchi(cleaniness), if a Punya Karma is done, then that karma bears no fruit.In your case the Punya karma is visting temples and offering prayers and worship .

A human being becomes impure in each of the following cases: 1)On waking up from sleep. 2)On evacuating bowels. 3)On touching dead bodies,attending funerals etc. 4)On having sexual intercourse. 5)On shaving,cutting hair,nails. 6)After applying oils on body. 7)After eating meat,drinking alcohol.

So,it is mandatory, that you bath. if after having done one of those above,you want to participate in a religious ritual.

Duswapnam yadi pashettu vaante vaa khurakarmani, Maithuney preta dhume cha snaanameva vidheetate/ ( In the cases of viewing disturbing dreams, after vomittings for whatever reasons, after shaving and haircuts, after the act of feminine congress, and nearing and touching a dead body, one ought to purify by Snaana(Parashara Smriti). 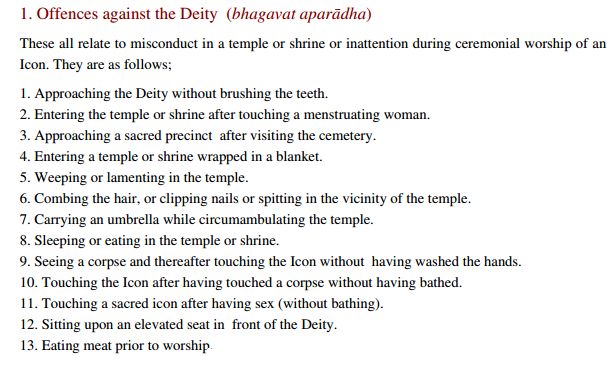 Offences against the Deity (bhagavat aparādha) These all relate to misconduct in a temple or shrine or inattention during ceremonial worship of an Icon. They are as follows;

13. Eating meat prior to worship

Not the answer you're looking for? Browse other questions tagged non-vegetarian shaktism .