How many times has Shiva opened his 3rd eye?

According to Hindu mythology, how many times has Shiva opened his 3rd eye and why?

Lord Shiva opened His 3rd eye infinite number of times, if we consider cyclic nature of time, as many events repeat in every Manvantara.

However, we know four instances where Mahadeva opened His 3rd eye, as per Puranas.

When Shiva was doing Tapasya on Kaliasa, Parvathi was serving Mahadeva with permission of her father Himavat. As Tarakasura was tormenting Devas, they couldn't tolerate him and Indra wanted to ignite desires in Shiva, so that Shiva would marry Parvathi and their son would kill demon Taraka. Indra commanded Kama (with Rati) to go to Kailasa and asked him to inginte desires in Shiva.

This incident is described in Rudra Samhita (Parvathi Khanda) chapter 18 and 19 of Shiva Maha Purana.

Finding the weak point, Kamadeva who was present in the vicinity, shot an arrow named Harsana which delighted Siva.

At that point of time Parvati went to Siva with emotions of love accompanied with spring.

After this Mahayogi (as a part of His divine Leela) praised beauty of Parvathi. He felt this as disgrace and saw His surroundings and found Kamadeva.

Then he spotted to his left the arrogant and foolish Kamadeva, who placing the arrow over the bow was about to shoot the arrow.

The infallible arrow, shot at Siva, became futile, without displaying its might. It calmed down. At this Siva was enraged.

Finding the arrow shot by Kamadeva,getting infructuous, Kámadeva was terrified and started shaking looking at Siva.

Getting frightened, and becoming unsuccessful in his efforts, he started remembering Indra and other gods.

Even though other Devas were eulogizing Lord Shiva, he opened His 3rd eye and burned the Kama Deva to Ashes.

While the gods were so eulogising, Siva opened his third eye, which had been fixed in the middle of the forehead. At once the fire flame emerged from the same, which started rising up words like the fire of the time of dissolution.

Before the gods could beg forgiveness from Siva, for Kama, the fire reduced Kamadeva to ashes. 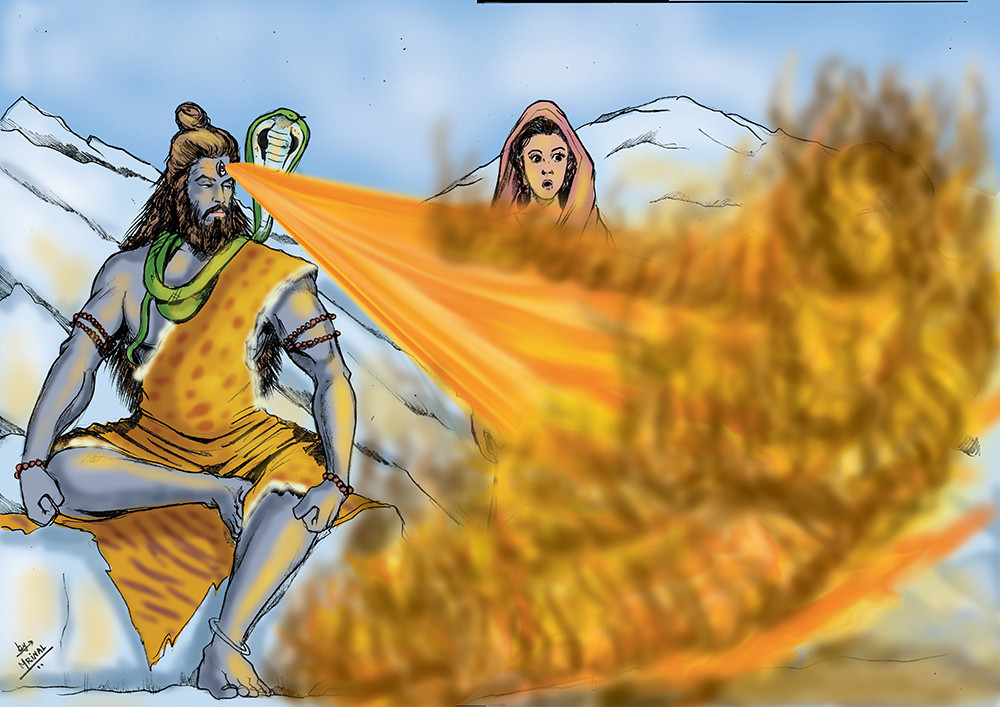 When Indra and Brihaspathi were going to Kalisa, Lord Shiva as a part of leela, went to them naked with matted hair and confronted them. Indra, who was haughty, argued with naked man and threatened to kill Him with Vajra.

Shiva enraged by Indra's behavior opened his 3rd eye. Just before opening 3rd eye, Brihaspathi identified Him as Lord Shiva and eulogized Him.

This incident is described in Rudra Samhita (Yuddha Khanda) Chapter 13 and 14 of Shiva Maha Purana.

Then the naked ascetic who was none else than Siva himself, wearing the matted locks of hair over the head and was illumining with his own splendour, was recognised by Brihaspati who offered his Salutation to him.

The extremely wise Brihaspati, offered his salutation to him while prostrating before him. Then he started praying him.

Shiva then forgiving, directed fire towards ocean and Jalandara was born out it.

At the confluence of the Ganga and the ocean, the terrific child started crying aloud.

Goddess Parvathi as a part of love sports, closed eyes of Great Lord from back and whole world became dark. Then lord Shiva opened His 3rd eye and fire emanated from it and blind creature (Andhaka) was born.

Once he went to the Mandara mountain, to witness its excellent beauty, where also he sported with Pārvatī and other ganas.

In the eastern region of the Mandaracala mountain, Parvati playfully, closed both the eyes of Siva.

A child emerged out of it. With an awful face, filled with rage, ungrateful, blind, crooked, black in colour, having a form different than a human, deformed and with many diseases. 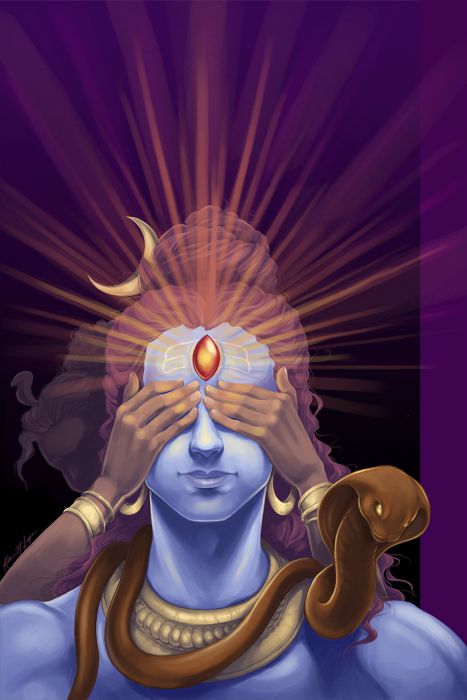 This story might have happened in one of the previous Kalpas, probably during Sveta kalpa as Shiva Purana mentions mainly stories of Sveta Kalpa.

Andhaka was born from Diti in this Kalpa as mentioned in Harivamsa Parva of Mahabhartha.

Incident 4 : When Shiva sported with Parvathi

This is similar story to above but Andhaka was not born and this might have happened in Sweta Varaha Kalpa (Present kalpa) as this is mentioned in Mahabhartha.

The beautiful Uma, with smiling lips and desirous of playing a jest,covered from behind, with her two beautiful hands, the eyes of Mahadeva. As soon as Mahadeva's eyes were thus covered, all the regions became dark and life seemed to be extinct everywhere in the universe. The Homa rites ceased. The universe became suddenly deprived of the sacred Vashat also. All living creatures became cheerless and filled with fear.

Indeed, when the eyes of the lord of all creatures were thus closed, the universe seemed to become sunless. Soon, however, that overspreading darkness disappeared. A mighty and blazing flame of fire emanated from Mahadeva's forehead. A third eye, resembling another sun, appeared (on it). That eye began to blaze forth like the Yuga-fire and began to consume that mountain. The large-eyed daughter of Himavat, beholding what occurred, bowed her head unto Mahadeva endued with that third eye which resembled a blazing fire.

She stood there with gaze fixed on her lord. When the mountain forests burned on every side, with their Was and other trees of straight Trunks, and their delightful sandals and diverse excellent medicinal herbs, herds of deer and other animals, filled with fright, came with great speed to the place where Hara sat and sought his protection. With those creatures almost filling it, the retreat of the great deity blazed forth with a kind of peculiar beauty.

Meanwhile, that fire, swelling wildly, soared up to the very heavens and endued with the splendour and unsteadiness of lightning and looking like a dozen suns in might and effulgence, covered every side like the all-destroying Yuga-fire. In a moment, the Himavat mountains were consumed, with their minerals and summits and blazing herbs. Beholding Himavat crushed and consumed, the daughter of that prince of mountains sought the protection of the great deity and stood before him her hands joined in reverence.

There's another legend involving Shiva's 3rd eye, where Pippalada, partial avatar of Rudra, in order avenge his father Dadichi's death from Devas, did a tapasya for Shiva.

Shiva pleased with his tapasya manifested and asked him whether he could see his 3rd eye. Pipalada said he couldn't see His (Shiva's) 3rd eye. Shiva told him to do a tapasya til he could see His 3rd eye. Finally, Pippalada was able to see Shiva's 3rd eye and the very moment when He saw the 3rd eye, Demon was born to take revenge on Devas.

However, this story doesn't involve opening of Shiva's 3rd eye. This is mentioned in detail in Chapter 40 Gautami Mahatmya of Brahma Purana (Pg No -910).

33
Why did Vyasa depict different Supreme Gods in different Puranas?
31
Repetition of Time and Yugas in Hinduism
16
Why does lord Shiva have three eyes?
9
Is Kamadeva (Manmatha) still alive or dead?
10
Who eliminated Manmatha - Lord Indra?
9
Wouldn't most of the incarnations of Devi be of Sati, not Parvati?
5
Lord Shiva and demon-king Jalandhara?
4
In which Yuga was Tarakasur born?
4
Does one eye of Lord Shiva always remain open?

29
Why Shiva (an asectic god) has family while most other Gods don't?
9
Is Kamadeva (Manmatha) still alive or dead?
8
Do any of the scriptures mention the story of Badavagni/Vadavagni?
4
Does one eye of Lord Shiva always remain open?
9
How could Satyaki have defeated Karna so many times?
6
Is it true that lord Vishnu gave his own eye to lord Shiva?
6
Sahadeva knew future events in Mahabharata. How many times did he use this knowledge in Mahabharata?
8
The third eye of lord shiva