What is the procedure , what things we need to perform Agnihotra?

What's the timing and the mantra's associeated with Agnihotra?

Agnihotra is a process that uses healing fire to purify the surroundings. The fire is prepared through a specific process, which is performed twice a day – during the sunrise and the sunset. In other words, Agnihotra is a ‘vedic yagna’ or a ritual that is mentioned in the Vedas, which is followed by the class of “Nambudiri Brahmins” of Kerala in India. There has been a worldwide increase in awareness about the innumerable effects of Agnihotra homam in the recent past.

The procedure of Agnihotra incorporates preparation with Agnihotra kit a small fire using cakes of cow dung in a tiny copper pyramid of specific shape and size into which ghee and grains of rice are added during the sunrise and the sunset. The significant part of the whole process is the two mantras that are chanted while adding the ghee and rice grains to the special fire, which is what is supposed to enhance the power of the process. The entire process is said to release tremendous energy in the surroundings. 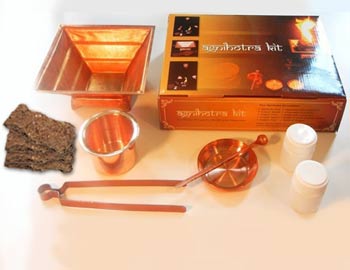 At the exact time of sunrise, chant the morning mantra as follows:

At the exact time of sunset, chant the mantra as follows:

Similar to the morning process, immediately on uttering swaaha both times, offer the two portions of rice mixture respectively to the fire.

There is a lot of incorrect information being spread about Agnihotra. Much of what can be found on the internet or YouTube about Agnihotra on neo-Hindu websites is pure fiction.

It is incorrect that it is simple/easy to perform Agnihotra (well, simple/easy is a perspective). It is also incorrect that anyone and everyone can perform Agnihotra. Agnihotra is a Vedic ceremony/lifestyle and thus comes with all rules/eligibility criteria that Vedic yajnas do. For an example of Agnihotra in Shukla Yajur Veda see the recording of Ram Prasad Gautam of Nepal. For an example of Agnihotra in Krishna Yajur Veda, see this video and related recordings of the fortnighly sacrifices.

I am going to describe Agnihotra in the context of Brahmin performers. It is possible that Kshatriyas and Vaishyas also are eligible to perform it, but I only know about the eligibility of Brahmins.

A Brahmin student after completing his basic Vedic education (learning to recite the text of his own recension/shakha) tend specialize one of the following paths:

These four paths are not mutually exclusive. E.g. one can learn advanced Vedic recitation, learn Tarka Sastra and perform Agnihotra while also being a family priest. However it is not typical for people to do so.

There are other eligibility criteria to pursue the path of Agnihotra. E.g. One must be married with a living wife (the ceremony is jointly performed) and must have a son (jAta-putraH). His hair must still be predominantly black (kRRiShNakeshI).

Agnihotra is performed in three fires: Garhaptya, Ahavaniya and Dakshinagni. The setting up the the three fires is performed in a ritual called agnyAdhAna. Once lit, the fires must not burn out until the sacrificer, or his wife dies. In practice, the Dharma Sastras allow some flexibility about this for exceptional circumstances, OR old age.

Performing daily agnihotra is accompanied by the fortnightly, monthly and quarterly yajnas. Having performed this for one year, the performer becomes eligible to perform advanced Vedic Yajnas like the Seven Soma sacrifices.

I would guess that there are less than one hundred living performers of traditional Agnihotra today! Some Kalivarjya texts prohibit the performance of the Agnihotra in the Kali Yuga.

I was able to find more details about Agnihotra Homa which helps in purification of surroundings, cleansing of air and elimination of bacteria, viruses etc. As one answer says there are lot of incorrect videos and blogs describing Agnihotra , so I went looking for an answer in scriptures and found some information in Asvalayana Grihya Sutra

To the deities of the Agnihotra, to Soma Vanaspati, to Agni and Soma, to Indra and Agni, to Heaven and Earth, to Dhanvantari, to Indra, to the Viśve devās, to Brahman.

The deities of the Agnihotra are Sûrya, Agni, and Pragâpati.

Materials required as per Adhyaya 1, Kandika 3

11. Now wherever he intends to perform a sacrifice, let him besmear (with cowdung) a surface of the dimension at least of an arrow on each side; let him draw six lines thereon, one turned to the north, to the west (of the spot on which the fire is to be placed); two (lines) turned to the east, at the two different ends (of the line mentioned first); three (lines) in the middle (of those two); let him sprinkle that (place with water), establish the (sacred) fire (thereon), put (two or three pieces of fuel) on it, wipe (the ground) round (the fire), strew (grass) round (it), to the east, to the south, to the west, to the north, ending (each time) in the north. Then (follows) silently the sprinkling (of water) round (the fire).

3[2]. Having taken two Kuśa blades with unbroken tops, which do not bear a young shoot in them, of the measure of a span, at their two ends with his thumbs and fourth fingers, with his hands turned with the inside upwards, he purifies (the Ājya, from the west) to the east, with (the words), 'By the impulse of Savitṛ I purify thee with this uninjured purifier, with the rays of the good sun'—once with this formula, twice silently.

4[3]. The strewing (of grass) round (the fire) may be done or not done in the Ājya offerings.

5[4]. So also the two Ājya portions (may optionally be sacrificed) in the Pākayajñas.

Assistance of a Brahmin is optional when it comes to Agnihotra. From Adhyaya 1, Kandika 3

It is to be done twice a day - around sunrise and sunset. From Adhyaya 1 Kandika 9

4[2]. The time for setting it in a blaze and for sacrificing in it has been explained by (the rules given with regard to) the Agnihotra,

5[3]. And the sacrificial food, except meat.

4[2]. And the deities (to whom those oblations belong), with the exception of the Upāṃśuyāja (offerings at which the formulas are repeated with low voice), and of Indra and Mahendra.

So from above what I could gather is that in morning mantra is for Surya and Prajapati, and evening for Agni and Prajapati.

And more details on where to sit during the homa, and mantras during oblations is in Kandika 10

Not the answer you're looking for? Browse other questions tagged mantras homam .

3
Who are agnihotra and darshapUrNamAsa obligatory for?

6
What is use of suchi (शुची ) , sarva (शर्वा) , pranita (प्रणीता ) , prokshani ( प्रोक्षणी ) , sfaya (सफ्या) wood pieces in yajna?
2
Which mantras should be chanted for Agnihotra more than aahuti?
2
Clarification about eligibility to perform Saraswathi kavacha from devi baghavatham
1
Mantras, Initiation and Practice
2
What is mantra siddhi?