What do scriptures say about using swear or abusive words for cursing people?

I am asking this question from a modern perspective.

Do we consider the use of abusive words as "Vaani Hinsa"?

Is there any punishment for this and also does it affect our deeds (karma)?

And also can we use curse words for condemning bad or evil things? 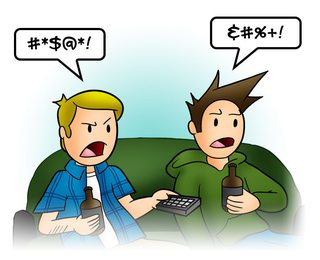 To control speech, O king, is said to be most difficult. It is not easy to hold a long conversation uttering words full of meaning and delightful to hearers. Well-spoken speech is productive of many beneficial results; and ill-spoken speech, O king, is the cause of evils. A forest pierced by arrows, or cut down by hatchets may again grow, but one’s heart wounded and censured by ill-spoken words never recovereth. Weapons, such as arrows, bullets, and bearded darts, can be easily extracted from the body, but a wordy dagger plunged deep into the heart is incapable of being taken out. Wordy arrows are shot from the mouth; smitten by them one grieveth day or night. A learned man should not discharge such arrows, for do they not touch the very vitals of others.

Almost all cultures & civilizations have warned against harsh speeches. Even the sarcasm or the criticism also mustn't be cruel in nature. Better to withdraw them. During SabhA Parva, when Draupadi was won, following conversation takes place:

Duryodhana said,--'Come, Kshatta, bring hither Draupadi the dear and loved wife of the Pandavas. Let her sweep the chambers, force her thereto, and let the unfortunate one stay where our serving-women are.'
"Vidura said,--'Dost thou not know, O wretch, that by uttering such harsh words thou art tying thyself with cords? Dost thou not understand that thou art hanging on the edge of a precipice? Dost thou not know that being a deer thou provokest so many tigers to rage? Snakes of deadly venom, provoked to ire, are on thy head! Wretch, do not further provoke them lest thou goest to the region of Yama. In my judgement, slavery does not attach to Krishna, in as much as she was staked by the King after he had lost himself and ceased to be his own master. Like the bamboo that beareth fruit only when it is about to die, the son of Dhritarashtra winneth this treasure at play. Intoxicated, he perceiveth nor in these his last moments that dice bring about enmity and frightful terrors. No man should utter harsh speeches and pierce the hearts of the others. No man should subjugate his enemies by dice and such other foul means. No one should utter such words as are disapproved by the Vedas and lead to hell and annoy others. Some one uttereth from his lips words that are harsh. Stung by them another burneth day and night. These words pierce the very heart of another. The learned, therefore, should never utter them, pointing them at others. A goat had once swallowed a hook, and when it was pierced with it, the hunter placing the head of the animal on the ground tore its throat frightfully in drawing it out. Therefore, O Duryodhana, swallow not the wealth of the Pandavas. Make them not thy enemies. The sons of Pritha never use words such as these. It is only low men that are like dogs who use harsh words towards all classes of people,

Although you have already selected an answer i am adding another one.

The reasons are two:

From chapter 16 of Essence of Skanda Purana :

Manu Smriti also talks about these 3 kinds of sins.The verbal sins are described as follows:

12.6. Abusing (others, speaking) untruth, detracting from the merits of all men, and talking idly, shall be the four kinds of (evil) verbal action

And the following shloka ,found in the same chapter, gives the punishment as well for verbally committed sins:

And also can we use cursing for condemning bad/evil things?

Yes, (as per the Manu Smriti) one should always speak the truth and condemn the bad evil things however harsh it might sound.The following is a relevant verse:

Not the answer you're looking for? Browse other questions tagged scripture karma dharma sin .

25
Does the karma from the previous life affects the current life?
75
Is our destiny predetermined? If yes, then why do our actions affect our karma?
9
Why do bad things happen to good people?
6
Why do we need to take another birth to pay the karma of past life?
3
Doing “evil” or “good” after being self-realized wont affect such an “individual” because he is not bound to the illusion of the material, yes or no?
4
What defines a “hero,” from a Hindu perspective?
7
What are all the scriptural basis for Results of Karma?
0
How is the law of karma valid when so many people from wealthy houses are unethical but to be born in those houses requires good karma?