Past life of Satyabhama

We know that Satyabhama is the second important wife of Krishna.

I found only this, saying about the past life of her and only one paragraph says about her past life.

Where can I read more about the past life of Satyabhama from authentic texts?

Satyabhama herself asked Sri Krishna about her previous birth. Satyabhama was Gunavati, daughter of Devasharma a Brahmana who belonged to Aithreya Gotra. He gave (in marriage) his daughter Gunavati to Candra.

When her father and husband went to forest, they were killed by a Rakshasa. Then Gunavati did Ekadasi vrata and Kaartika Masa vrata every year and finally she went to vaikunta. Thereafter, when Devas requested, Lord Vishnu (Sri Krishna) married her she when was born as Satyabhama.

O beloved, listen with concentration how you observed meritorious holy rites in your previous birth. I shall narrate everything to you.

There was an excellent Brahmana named Devasarma in Mayapuri towards the end of Kirtayuga. He belonged to the Atreya Gotra. He was master of Vedas and Vedangas. When he had become pretty old, he begot a daughter named Gunavati.

He had no son. He gave his daughter (in marriage) to his disciple named Candra. He considered him his son and the disciple of perfect self-control (honoured him) like his own father.

Once those two went to a forest in order to bring Kusa grass, sacrificial twigs and fuel. They were killed by a Raksasa as hideous in form as the god of Death.

Both of them went to the world of Visnu due to the power of their respective merits.

On hearing that both of them had been killed by a Raksasa, Gunavati became extremely distressed, having been separated from her husband as well as her father. She lamented in a pitiable manner. She quickly sold all the furniture, utensils etc. and performed according to her capacity their obsequies and other holy rites for (their) happiness in the other world. Living like a dead person, she continued to stay in the same city.

Two Vratas were perfectly observed by her throughout her life till death, viz. the Vrata of Ekadasi and the holy rite of Karttika. Thus Gunavati performed the Vratas every year. Once that slender-bodied one became afflicted with fever. She was in great physical pain. O my beloved, with great difficulty she went slowly to Ganga for taking her bath. When she entered the water, she became distressed with chillness. She shivered.

By that time the lady in distress saw an aerial chariot that had come from the sky. She got into that aerial chariot and went to the world of Vaikuntha. Thanks to the merit of Karttikavrata, she came to my presence.

When I came to the earth at the request of the Devas headed by Brahma, all those groups (of Devas) also came along with me. O beautiful lady, all these Yadavas are my own attendants.

Your father Devasarma now has the name Satrajit. He who had been called by the name Candra is Akrura now and you are that splendid Gunavati.

You gave me great delight, thanks to the merit of the Kārtikavrata.

You can read rest of the chapter to know story behind Kaartika Masa Mahatmya which corresponds to months of October and November.

The story of Satyabhama’s past life or former birth is also described in Padma Purana – Uttar Kanda –Part VIII – Chapter 88 & 89 – An account of Satyabham’s former birth.

In the end of the previous chapter Satymabhama asks Shree-Krishna about her past life .

Satya said:
31-33. Formerly (i.e. in my previous existence) which gift (did I give), which vow (did I observe), or which penance did I practise, that I, a mortal, have become like Parvati in this mortal (world), and that I always occupy half (the portion) of your body, always ride Garuda, and went with you to the abode of deities like Indra? Therefore, I desire to ask you, what aus- picious (act) I did in the other (i.e. previous) existence, what (kind of) character I had, and whose daughter I was?

And then Shree-Krishna tells her all about her previous existence.Here is the excerpt.

34.45 At the end of the Krta age in Mayapuri there was an excellent brahmana of Atri's family, Devasarman by name, who had mastered the Vedasand the Vedangas. The old man had a daughter, Gunavati by name. Being sonless, he gave his daughter to his disciple named Candra(sarman). He (i.e. Devasarman) looked upon him as his (own) son, and he who had controlled his passions. The two, desiring to collect kusas and fuel, once went to a forest.

The two then roamed in the forest at the foot of the Himalaya mountain. Then they saw a fierce demon coming (to them). With their entire body overcome by fear and unable to run , they were killed by demon with death like form.

1-4. Then Gunavati, after hearing that the two were killed by a demon, being overcome by grief for her father and husband, she plunged into the ocean of grief and was overcome by it.

She, doing auspicious acts, sold all domestic articles and performed the rites beneficial to the two in the next world. She, highly devoted to Visnu, calm, truthful, pure and with her senses controlled, lived in that city only and sustained her life. From birth till death she properly observed two vows: the vow of Ekadasi and the vow of (i.e. relating to) Kartika.

15-30. In this way Gunavati, always devoted to Visnu's followers, and having fixed her mind on him, passed every year.

O dear one, once she who was emaciated due to old age and was tormented by fever, slowly, somehow, went to Ganga to bathe. When, after she got into the water , she trembled and was oppressed by cold and frightened, she saw an aeroplane that came from the sky. From the sky it approached with (beings) having Visnu's form, having conches, discs and maces in their hands, and properly marked with banners having (the pictures of) eagles. She got into the aeroplane served by a bevy of celes- tial nymphs. The attendants took her being fanned by chowries, to Vaikuntha.

Your father became (i.e. was born as) this king Satrajit. He who was Candrasarman (became) Akrura, and you are that Gunavati, O auspicious one.

Since you offered all that vow etc. to Visnu of the from of your husband, therefore, you have become my wife. Due to that vow only which you formerly (i.e. in the former existence) observed in Kartika, from birth till death, you will never be separated from me. 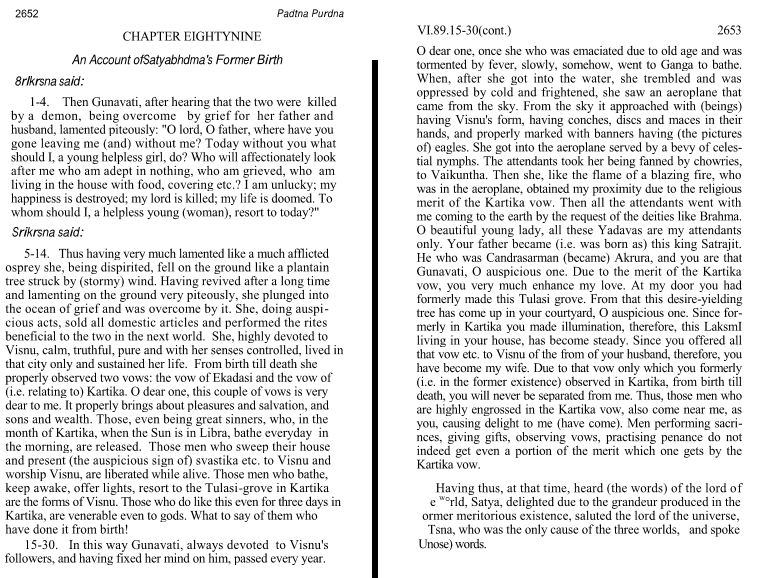 Not the answer you're looking for? Browse other questions tagged scripture krishna satyabhama .

9
Lesser known but main wives of Lord Krishna apart from Rukmini, Satyabhama and Jambavati?
17
Which all early Hindu scriptures contain references about Shri Radha?
7
Which are authentic Prakarana grantha of Adi Shankaracharya?
2
Sri Krishna's Weighing
5
Is there any scriptural reference for Satyabhama killing Narakasura?