Does Veda has more than one Samhita regarding to Shakha?

As I've discussed here, we know that ancient Rishi heard Vedic hymns in the state of Tapasya (deep mediation) which are called Shruti/Vedas. Vedas are divided into two parts Samhita - the (mantra) part of Veda seen/heard by Rishi & Brahman-Grantha - interpretation & commentaries on Samhita.

But several times (in books and on web) I found they mention different/various Samhita of a particular Veda. For example (Note that I know that Yajurveda has two forms Shukla & Krishna and hence separate Samhita - which is different topic):

Similar thing I found from the following image of veda-tree at here: 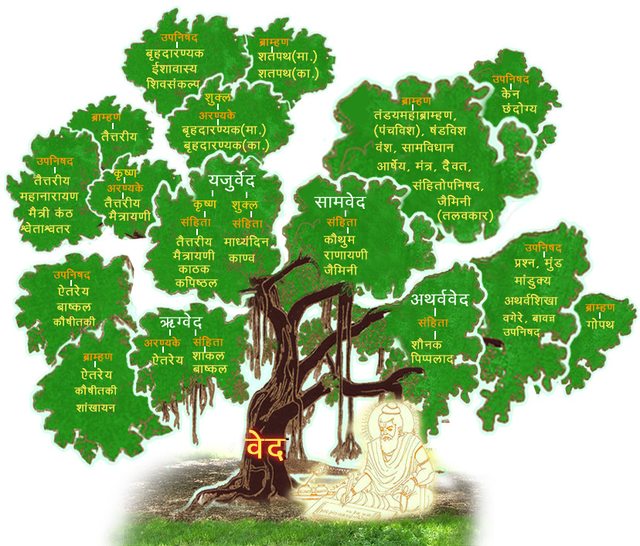 As I've not read any Samhita yet and don't know deeply about Samhita.

I think if there are more than one (version) of Samhita of a particular Veda, they might be similar with just minor (chant) difference.

Do Veda have more than one Samhita regarding to Shakha?

Yes, each Shakha of Veda has it's own Samhita. There were 21 Shakhas of RigVeda, 1000 Shakhas of SamaVeda, 101 Shakhas of Yajurveda and 9 Shakhas of Atharvaveda as I discuss in my answer here. Thus total about 1131 Samhitas. We have only about 12 Shakhas alive with 12 Samhitas.

In other words, does Shakha has it's Samhita like Brahmana?

How do Samhitas of same Vedas differ?

I discuss this in my answer here.

Not the answer you're looking for? Browse other questions tagged scripture vedas sruti brahmanas .

21
What is difference between Shruti and Smriti?
15
Can it be precisely known exactly how much amount of Vedas has been lost?
11
Are there any Variants in Samhita of Vedas?
6
What are the arguments of Purva Mimansa that says Brahmanas are Apaurusheya?
5
Looking for scriptural source that introduce Brahmanas

11
Has the Anukramani of the Shukla Yajur Veda ever been published in any form?
5
What parts of the TaittirIya Samhita of the Yajur Veda are Shruti?
3
What is the difference between Prajapati and Parameshthin Prajapatya, and which one is Brahma?
8
Does Bhagavad Gita Sloka 17.23 refer to Brahmanas or Brahmins?
10
How many Brahmanas and Aranyakas are there in the Vedas?
6
What are the arguments of Purva Mimansa that says Brahmanas are Apaurusheya?